Accessibility links
Cooked NPR coverage of Cooked: From the Streets to the Stove, from Cocaine to Foie Gras by Jeff Henderson. News, author interviews, critics' picks and more.

Title
Cooked
Subtitle
From the Streets to the Stove, from Cocaine to Foie Gras
Author
Jeff Henderson

Traces the story of a Los Angeles native who spent time in jail for dealing drugs and discovered his aptitude for cooking while working in a federal prison kitchen, a talent that led to an executive chef position at an upscale restaurant.

Book Details Journey from the Streets to the Stove

March 5, 2007 • Jeff Henderson discovered his love of food while working as a dishwasher in prison, where he served time for dealing drugs. Now the executive chef at Cafe Bellagio in Las Vegas, Henderson shares his story in Cooked, a new memoir.

Book Details Journey from the Streets to the Stove 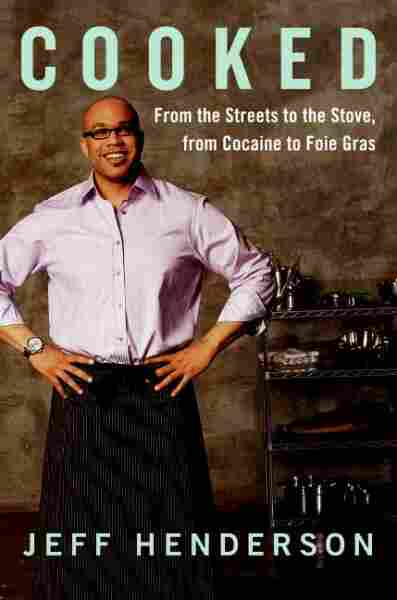 By the time I showed up in Las Vegas, I'd been looking for work for more than a month. I had busted my ass in the five years since my prison release, rising from dishwasher at a small restaurant to sous-chef at one of the most prestigious kitchens in L.A. I was on track toward running my own restaurant when a political kitchen battle suddenly left me begging for someone to give me a chance to start over. I hadn't been jobless this long since I'd left prison, and my prospects of landing a position hadn't been so bleak since then, either.

Every potential employer I met with seemed only interested in the fact that I was a convicted felon. They didn't care that I'd proven myself in some of L.A.'s best kitchens or that I really could cook. They definitely didn't care that I had a wife and two young children to support, and that I'd spent the last of our savings on a one-way ticket to the desert hoping to restart my career. A week into my search, every hotel on the strip had turned me down.

When I visited these properties, most of the people I interviewed with liked me. My cooking resume was impeccable, five stars across the board, but their enthusiasm had a way of drying up as soon as I told them I had spent time in federal prison for drug trafficking.

On the outside, I was what was acceptable for a black man in corporate America: clean shaven, earring hole covered up; I even toned down my walk so that I wouldn't swagger and come off as ghetto during interviews—I've got a pretty good stroll.

Still, it always came down to me being a felon. Everywhere I went, they gave me this smoke-and-mirrors bullshit, telling me, "We'll call you when we're ready." At the Paris Hotel, they were introducing me to my staff before I told them about my criminal record. Then they told me to take a walk.

With potential employers, I always explained about my past: I was young, I made some mistakes, and I spent years regretting those mistakes. My criminal past was so far behind me that I regularly lectured schoolkids about how crack had been destroying our community since back when I was just a schoolkid myself. None of these execs were having it—like I was the first ex-con who ever looked for work on the strip.

By the time I showed up at Caesars Palace, I was desperate.

Caesars was a place I knew well because I used to roll there when I was a dealer. Back in the day, no one knew how to cater to high rollers like Caesars. Me and my boys used to come up from California for all the prizefights with Louis Vuitton bags full of cash. We gambled thirty Gs at a whop. And Caesars management? They loved our asses. We flew in and a limousine driver was holding up a sign at the airport for the "Henderson Group."

But "back in the day" was fourteen years back already, and I didn't have any Louis Vuitton bags. I sure didn't have one full of cash.

The night before my Caesars interview, I snooped all over the hotel to put my game plan together. If I saw some cooks walk into the casino, I would roll up on them.

"Hey, how you doing?" I'd say. "My name's Jeff Henderson. Can I talk to you for a second? I'm thinking of moving up here. What's it like? What's the chef like?"

It was a reconnaissance mission. Since I'd have to prepare a tasting meal for the executive chef, I planned to base it on the foods he liked. I wanted to make my mark by showing up for the interview with the full menu in my briefcase. So when he says, "Hey, this is nice," he doesn't know that I've already been on his property eating his food. The cooks tell me he likes Italian, so I go to the Caesars Italian restaurant, Terrazza, and have the Veal Milanese. I even chatted up some of the hostesses to get a feel for the hotel politics.

By the time I walked into the man's office, I was comfortable, confident. It was a huge room decorated from one end to the other with Roman-style artifacts, the walls covered with pictures of prizefighters. The man behind the desk was a smooth middle-aged Italian from New York with black hair slicked straight back.

And here I was, this black motherfucker in a $150 Brigard chef's coat made of Egyptian cotton. I went right into my hard sell, telling him that I was ready to go to work on the spot. I told him straight up: "Look, Chef, I've done some time. I learned to run a kitchen in prison. But my resume speaks for itself."

I think he liked my aggressive approach. In Vegas, like in prison, you have to be tough to run a kitchen. If the cooks sense any sign of weakness, they'll run you over, tell you how to do your fucking job.

"All right," he said. "I want you to cook me dinner on Friday. Write up a menu."

I opened my briefcase, showed him the menu I'd already typed up and brought along with me, and told him that instead of giving me the usual ninety-day probation period, just to give me a month.

"That won't be necessary," he told me. "Just cook me a tasting dinner for six."

That tasting dinner would be a tryout for the food and beverage executives. Six courses in sixty minutes would decide my fate and the fate of my family. It would be the most important meal I ever cooked.

I remember I had my game face on, moving up and down the line in that sprawling kitchen like a general on the battlefield, flames roaring from my stove.