Accessibility links
No Way Renee NPR coverage of No Way Renee: The Second Half of My Notorious Life by Renee Richards and John Ames. News, author interviews, critics' picks and more.

The Second Half of My Notorious Life

by Renee Richards and John Ames

A candid personal account by a pioneering doctor and tennis player who underwent sex reassignment surgery in 1975 discusses her pursuit of legal rights, her perspectives on gender issues, and her relationship with her son. 50,000 first printing.

NPR stories about No Way Renee

'The Second Half of My Life'

February 8, 2007 • Dr. Richard Raskind was a champion tennis player and a renowned eye surgeon with a wife and son. But in 1975, Renee Richards emerged, after a highly publicized sex reassignment operation. Richards talks about her new book and questions the effects of her decisions and her notoriety.

'The Second Half of My Life' 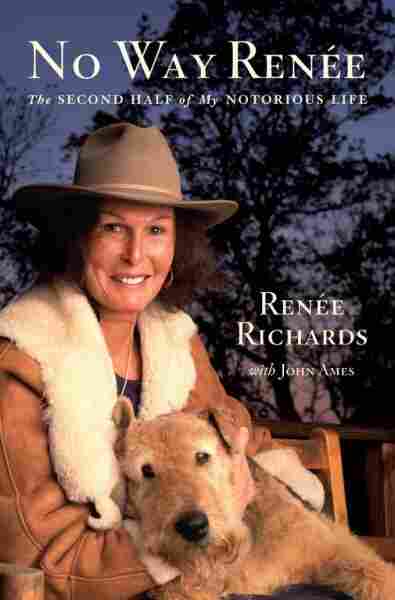 In 1976, I was one of the most famous people in the world. The paparazzi were on my trail twenty-four hours a day, hungry for any photo, the less flattering the better. The mainstream press was better, sometimes. People, Time, Newsweek, Sports Illustrated — I was featured in them all, an international phenomenon. Once, at the height of my notoriety, I found myself in Uruguay, where I had gone beyond the urban centers like Montevideo and was walking down the beach at Carrasco, a tiny coastal village. I was enjoying a welcome sense of anonymity, but a man in a little kiosk pointed to my picture on a magazine and with much excitement asked me to sign it, which I did. Recognizable even in the countryside of Uruguay: that sums up the Renée Richards phenomenon at its zenith.

During that time I was deluged by a myriad of television opportunities. All the major figures wanted to interview me: Phil Donahue, Tom Snyder, Howard Cosell, and many others I can't recall. I was on the Today show, Good Morning America, and a host of other major shows. I was even invited to do The Hollywood Squares, but I declined. I had my limits.

And what had I done to merit this interest? Perfected an organ transplant procedure? Gone over Niagara Falls in a barrel? Neither. Simply put, I had undergone a male-to-female sex-change operation and then had the temerity to play in an amateur women's tennis tournament. Of course there was more to it than that, but basically that was the source of my infamy. To compound my audacity, I had not hung my head and apologized. I had gone to court, won my case, and played professional tennis as a woman.

The story of how I got into that situation was told in my autobiography, Second Serve. Born Richard Raskind. Raised a nice Jewish boy. Educated at Yale. Tournament tennis player. Top surgeon. Lieutenant-commander in the Navy. Married to a beautiful woman. Father of a wonderful son. But compelled by a secret drive that could not be suppressed, even with years of psychotherapy and every trick in the book. Another entity, Renée, kept growing stronger and stronger until she eventually took over.

It was a long nightmare for Dick, and just when it seemed to be over, another one started for Renée. She had to walk onto a tennis court and endure the intense scrutiny of thousands of people. It was a choice, yes, but not a happy one and not made out of a desire to show off. I took a stand on principle, but it exacted an emotional and financial price. When I left the tour, I was very tired of the fishbowl.

But I have had more than twenty-five years to get my second wind, so I want to respond to the question I hear so often: "What have you done lately, Dr. Richards?" One answer is that I have been doing what I always wanted to do in the first place: live a private life. Yet I remain a subject of interest and live in the memories of the many people who followed my adventures years ago. Unhappily, their mental image of me is too frequently tainted by grainy tabloid photographs and sensational headlines. I don't deny that my life has been strange, but strangeness is only part of a complex whole that is not well understood.

I have practiced a highly specialized form of eye surgery for forty years, and I am still operating every week. I am also an educator, having served as a clinical professor, first at Cornell Medical School and later at New York University, where I continue on the faculty to this day. I have instructed and influenced hundreds of residents and postgraduate fellows who are out in the world putting my lessons to work. They think of me as a distinguished mentor, not a curiosity. In 2001, I received the Helen Keller Services for the Blind Award, Manhattan Branch, given yearly to an outstanding ophthalmologist.

Many people know that I coached Martina Navratilova to two of her Wimbledon championships, but few know about the many lesser-known players, both professional and amateur, whose skills I have helped improve. They have gone on to become ambassadors for the game I love. This behind-the-scenes contribution is at odds with the picture of Renée Richards as an unbalanced, publicity-crazy flake. I am not despised by the tennis community. I am a respected figure, despite my notorious past, and in 2000 I was inducted into the Eastern Tennis Hall of Fame.

And I am seldom given credit for all that I have done in the area that has made me notorious, transsexualism. I'm the first to admit that I have not been an avid ambassador for transsexuals. I do not think of myself primarily as a transsexual. In fact, I fought for my rights largely because I was personally affronted that a medical operation could overshadow everything else I was as a human being. But there is no denying that when I retired from tennis, the world was much more aware of what a transsexual was, and that familiarity, not to mention my success as a professional coach, dispelled a lot of the condition's scandalous overtones. I opened doors for those who came after me, and I am a hero to many of them.

But I have not written No Way Renée as a justification of my life; rather, it is a look at the second half of a life that I hope no longer needs justifying. It is the story of how I thought through and reconciled my bizarre family life; how my son and I coped with my changed persona; how I gave my new incarnation an adolescence; how I restored my medical career; how I searched for understanding, stability, romance, health, and a sense of my place in a changing world. It answers the question in the minds of so many, "Was your sex change a mistake?"

When I first exploded on the scene, I was in my early forties but was nevertheless a newborn who hardly knew how to respond when asked, "How does it feel to be a woman?" Thirty years later, I have enough experience to at least say something about how it feels to be a particular woman: Renée Richards. Why bother? Well, somewhere along the line, I became something I never imagined I would be, a notable part of America's social history. So, No Way Renée completes the record of my unusual pursuit of the American Dream, an ideal that encourages us to make of ourselves the most we can. It is a dream my immigrant family embraced and realized. I continue to believe in it.