Arriving at the English settlement in Calcutta in 1836, Lady Eleanor, sister to the colony's newly appointed Governor-general, and her sister, Harriet, anticipate an unpleasant experience but instead find the region an area of seductive and exotic culture. Reader's Guide available. Reprint. 17,500 first printing.

NPR stories about One Last Look

Books for Armchair Travel and Adventure

February 12, 2007 • It's winter, which may make you feel like you want to go on a journey. Maybe you're actually planning one, or perhaps just wishing for an adventure. Librarian Nancy Pearl suggests a stack of travel books that will send you on journeys across distance and time.

Books for Armchair Travel and Adventure 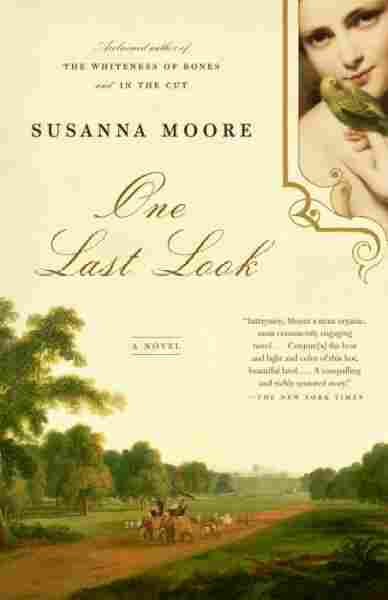 There was another storm this morning, leaving a foot of water in my cabin, and now a rat scrabbles amongst my sodden books. There is a stench of rotting hides. My own excrement floats back and forth. The journal I began when we sailed last October is ruined. I have started anew—this is my first entry.

As sick as death, I’ve eaten only oranges, and the teaspoonful of arrowroot I take each morning (I just devoured the last five oranges in the world crouched against the bolted door of my cabin, terrified that someone would take them from me). We have not seen land, nor another vessel—not even a sea monster—in seventy-two days. There is no coffee, no biscuits, no marmalade, no ale.

Henry is not sick—he eats whatever food remains and dines again with the sailors. They’ve grown fond of him, I hear. Harriet is not sick—to my astonishment, she’s never been better. Cousin Lafayette, of course, is a good sailor. Henry convinced the crew to tie Lafayette to the mast for his twenty-fifth birthday and douse him with sea-water. He spends much of his time with the ladies, particularly the lovely Miss Haywood—he aims to improve her whist. Frolic, like Harriet, is having a lovely time. The dog has a little window of his own, tacked with netting, where he sits and utters odd moans of pleasure at the foam.

Rather we were transported to Botany Bay in a ship full of Irish poachers than this! At least we’d have had the pleasure of a little felony.

I cannot conceive what it is like for the passengers below, packed tightly with the captain’s private stores of cheese and hats to sell—the hatches are closed to prevent flooding. The wailing of the eighty-four hounds belonging to a Welsh army captain is ceaseless. A company of soldiers—who ate all the poultry before we’d left the Thames—drills up and down in new hobnailed boots, more thunderous even than the loose casks rolling across the deck. (We are most grateful that the crew is barefoot.) Harriet’s maid Jones is so unhinged that Dr. Drummond has tied her to a chair.

Two sails were carried away in the storm and a drunken German piano tuner traveling to Ceylon lost overboard. Henry says it is a great pity, as piano tuners are hard to find in the East. There was a gathering on deck at sunset to ease his way to his Reward, but I could not bring myself to attend.

My sheets are stiff with blood; my hair heavy with salt. There are no clean clothes. My nightdress was so soiled, I stuffed it through the porthole and watched it disappear in the dirty yellow sky.

I sleep when my exhaustion is so great that even I cannot resist—the click of the cockroaches cannot keep me awake, nor the sailors singing “May God Sink the Sea,” nor the groan of the bulkheads as they strain to split in two. The ocean streams heedlessly past, so near it seems to surge through my body. The movement of the ship both lulls and torments me—a glide forward and then a trembling pause until the ship relinquishes with a shudder and swoons into the trough of the next swell. It puts me in mind of the plea- sures of love.

St. Cléry hides in his cabin with green-sickness, and Henry’s manservant, Crick, is covered in boils.

No matter how loud I scream, no one can hear me.

I am feeling better now. It is so hot now we’ve passed the Equator, I wear only a muslin camisole under my dressing gown. (By the time we reached Rio de Janeiro, I’d given up wearing stockings or dressing my hair.) My maid Brandt is disappointed that I refuse to unpack my finery, in fear that soon we will be obliged to dress like Ali Baba (she has never forgotten the evening that my mother, who’d been once to Syria, came down the staircase wearing Damascene pantaloons and a jeweled dagger at her waist), but she is too busy quarreling with the new half-caste maid, Rosina, to make a fuss.

Harriet, good girl that she is, happily keeps up her regime, wearing her corset without complaint, plaiting and plaiting again her hair into two splendid coils, splashing in the buckets of salt water the young officers conspire to bring her—Capt. Chesnell is said to have challenged Lt. Galsworthy for twice going out of turn. She busies herself writing longish letters when she is not memorizing Lalla Rookh. I worry that my sister will have a difficult time of it when we arrive. Harriet is used to comfort and quiet and a certain kind of society. That she is a trifling bit simple will be an advantage, for once. I used to sit in my cabin and think of ways to frighten her (it is not as easy as one would think—she is not embarrassed by fairies). I’d set off to find her with something akin to glee, but her guileless gaze, turned on me in bewilderment as I prowled round her, robbed me of my purpose. She is so biddable, so eager to please that I would creep back to my cabin in shame.

Life on board ship, while not being Paradise to all, as Brandt insists on reminding me, is nothing compared to what awaits us.

Yesterday, an unearthly howl, one I’ve not heard before, racketed through the ship like a troupe of demons. (At first, I thought that I was howling.) I bestirred myself to the kennel where Lafayette keeps his dogs, but they were dumb with fear, cringing against each other. Eighteen puppies have been born in four months. I never liked a greyhound—too eager—but these were pitiable in their distress. Even Capt. Llewellyn’s hounds were speechless for once.

Tonight when I heard the horrible scream again, I slid from my berth, making my way as best I could across the fen that was once my mother’s carpet (we were obliged to provide our own furnishings), and threw open the door. There was no one there. I could not bear to return to my berth—it reeks of too many other filthy souls—and found myself wondering if Henry were still awake. I went down the dark passage, my hands skimming the walls to keep from falling. Lafayette chipped one of his teeth in a fall last month.

The door to Henry’s cabin was open. I stepped inside. He was sitting in an old armchair from Ravenhill, bent over a map. I made myself a place on a narrow bench built into the wall. There was a basket of mending on the bench, waiting for Crick to recover his senses, if not his skill with a darning egg. (I used to slip into Henry’s room when he was away at school to look at his things. I used to take his stockings to bed.)

“You have worn your stockings to shreds, my dear,” I said, looking into the basket. The bench was seeping and the damp wood was cool beneath my dressing gown.

“Yes.” He made an attempt to move his chair closer to me, forgetting that it was nailed to the floor. I snipped a thread from my bodice with a pair of tiny gold scissors from the sewing basket.

“Shall we resume Mr. Berwick’s Life?” I asked. I glanced at him, wondering if his curious giddiness of the last few weeks had finally passed. He still resembles a convict—the bits of hair clipped from his poor head for souvenir locks have yet to grow back, rendering his pale eyes too large for his face.

He put the map aside with reluctance. I lighted another lamp, and found the Berwick, its pages brittle, and opened it to my place. “I had long made up my mind, not to marry while my father and mother lived, in order that my undivided attention might be bestowed upon them. My mother, had indeed, sometime before recommended a young woman in the neighborhood to me as a wife—she did not know the young lady intimately—but she knew that she was modest in her deportment, beautiful and handsome in her person and had a good fortune. In compliance with this recommendation, I soon got acquainted and became intimate with her, but was careful not to proceed further, and soon discovered that ’tho her character was innocence itself she was mentally one of the weakest of her sex—”

He interrupted me. “Do you remember the time Aunt Sally caught her skirt climbing a stile and tumbled head over heels, landing on her feet with her dress over her head?” He began to laugh, scratching his short gray beard. Crick has been too sick to shave him.

“You always forget that I wasn’t there,” I said. “Harriet was there.”

“And the next week Glamorgan had made a dozen tartan pantaloons for her to wear under her hoops. In Father’s books they never wore underlinen. Much nicer.”

“For all the times you have told me this story, I wish I had been there.” With thee conversing, I forget all time.

He didn’t catch my tease. I wouldn’t say that Henry has wit, although he is superb with puns. “I could swear you were,” he said.

“No. I’ve certainly come to regret it.”

“Have you concern of these things?”

He was puzzled for the briefest moment. “These things?”

“I leave that to my sisters.” He was looking at my feet. As it is always my delight to oblige him, I lifted my dressing gown so he could see my ankles. I was wearing a pair of red morocco slippers; I was not wearing stockings. (When we were young, he liked me tied to my spine board and trussed like a goose.) “Shall I read on?”

He grunted. I pulled the lamp closer. “The smirking lasses had long thrown out their jibes against me as being a woman hater, but in this they are greatly mistaken. I had indeed been very guarded in my conduct towards them, as I held it extremely wrong and cruel to sport with the feelings of any one of them in making them believe that I was in love with any of them, without really being so; in this (which was one of my resolves) sincerity and truth are my guides.” I looked up and saw that he had gone back to his map. I laid aside the Berwick, of which I am not over-fond, and, rescuing Saint-Simon from the exile of my pocket, eagerly returned with him to Paris.