A Young Surgeon's Reflections on Mortality

In a series of reflections on the world of modern medicine, a young doctor describes how physicians must deal with the inescapable reality of death, the risks and rewards of emotional involvement, patients' expectations concerning their doctors, and her personal experiences throughout her education, residency, and practice with mortality. 75,000 first printing.

January 27, 2007 • When Pauline Chen became a doctor, she was troubled by inconsistencies in the ways that fellow physicians dealt with the emotional aspect of death and dying. Chen tackles the subject in her new book: Final Exam: A Surgeon's Reflections on Mortality. 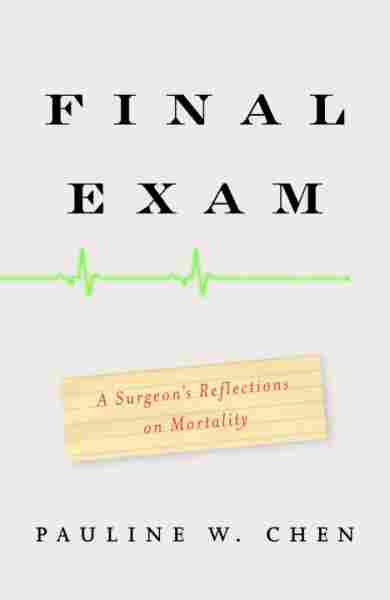 My very first patient had been dead for over a year before I laid hands on her.

It was the mid-1980s, and I had at last made the transition from premedical to full-fledged medical student. That late summer from the window of my dormitory room, I could see the vastness of Lake Michigan dotted with sailboats and the grunting, glistening runners loping along its Chicago shores. Despite this placid view, I rarely looked out my window. I was far too preoccupied with what lay ahead: my classmates and I were about to begin the dissection of a human cadaver.

Prior to that September, the only time I had seen a dead person was at the funeral of my Agong, my maternal grandfather. Agong had grown up on a farm in the backwaters of Taiwan at the turn of the last century. He barely finished high school, but by the time he was middle-aged, Agong owned a jewelry store in one of Taipei’s most fashionable districts and had raised five college-educated children. While he grew up speaking Taiwanese, Agong had taught himself Mandarin Chinese and Japanese, languages and dialects as different as German, English, and French.

Agong loved my mother, his firstborn child, and lavished her with that gift of nearly blind parental adoration. As her firstborn child, I was in a special position to receive some of those rays of love. Unfortunately though, with my American upbringing I understood Taiwanese but spoke only “Chinglish,” a pidgin amalgamation of English and Mandarin Chinese. Moreover, Agong and I had been separated by half a world until he moved permanently to the United States when I was in high school. So while I loved my grandfather, our relationship always remained rather formal.

Agong died in the fall of my sophomore year in college. One weekend, my parents mentioned to me on the phone that he was doing worse and might possibly “not make it.” A week later they called again to tell me that he had passed away.

My mother was grief-stricken. She became consumed by guilt and remorse, feelings that I would later learn often plague relatives of the recently dead. For my part, while I did mourn Agong’s death, I was unsure how to cope with this phase of life or with my mother’s overwhelming grief. I had not been witness to his actual dying, and seeing my grandfather alive during one visit and lying dead in a casket the next made his death unreal to me. The funeral was not particularly long, but the parade of mourners dressed in black and my own uneasy feelings seemed to last forever.

I was surprised by how un-lifelike Agong looked lying in the casket. Despite all the efforts of the mortician, the figure in the coffin simply looked like a model of Agong, like a wax figure from Madame Tussauds’s famous museum. His face and body as I had known them were gone. Even his nose, famous in our family for its Jimmy Durante profile, had changed; the nostrils looked less fleshy and even droopy, like a once majestic sail that had lost its wind.

The fact that even the professionals with all their makeup and tricks could not re-create my grandfather’s likeness only served to emphasize that he was really dead and gone from our lives. That funeral, the telephone call from my parents announcing my grandfather’s passing, and the memories of my mother’s grieving were the most direct experiences with death that I had prior to medical school.

The majority of my 170 medical school classmates were no more experienced than I, and our first real exposure to death would be that semester in the human anatomy course. While one student had worked in a hospital morgue during college and another had worked in an Illinois meatpacking plant (subsequently becoming a strict vegetarian), those two classmates were the rare exception. Instead, the summer before starting medical school most of us privately dreaded and fretted about dissecting a human being.

During my medical school orientation week, I was finally able to share my dissection fears with others who harbored the same uneasiness. Anatomy quickly became a major topic of discussion at social events. The classmate who had worked in a morgue was a prime source of information for the rest of us. I kept wondering if the cadavers looked alive or like wax figures. I secretly hoped that they would look at least as unreal as my grandfather had, believing that the less they looked like the living, the easier dissecting would be. We asked the second-year medical students about their experience the previous year. “Wear your old T-shirts and jeans,” they said, sipping their drinks nonchalantly at receptions for the new initiates. “You’ll want to throw out those clothes at the end of the semester because they’ll just reek.” Holding on to their words, I replayed their cavalier responses in my mind. What smell would cling to our clothes? Death?

From the moment I had begun contemplating this career path some fifteen years earlier, I knew that I would want to use my profession to help people. Most of my classmates were no different. We were an odd group, idealistic but intensely obsessive and competitive enough to have survived the grueling premedical curriculum. While a few of us might have harbored goals of financial security or visions of a certain lifestyle, we were for the most part determined to learn how to save lives.

What many of us did not realize was that despite those dreams, our profession would require us to live among the dying. Death, more than life, would become the constant in our lives.

The dissection of the human body had fascinated me since I was seven years old. I had some idea back then that I might want to become a doctor. At the time my Agong had just been diagnosed with a brain tumor, and my mother took my younger sister and me back to Taiwan for the summer to be with him. The diagnosis, the operation, and the neurologic deficits resulting from the removal of a part of my grandfather’s brain would eventually color the rest of my grandparents’ lives together. Nonetheless, at the time I was enthralled by the way his neurosurgeon comforted my grandmother and family. He was a big, bald Taiwanese man, with a round face, hands like bear paws, and a demeanor that was at once humble and confident. When he came out to the waiting room to an audience of anxious family members, his words—“I got it all out”—fell on us like a great light from the heavens. That experience convinced me that medicine was the work of gods.

An aunt who was in medical school at the time heard about my interest and offered to take me to her anatomy lab. I was fascinated by the idea that there might be secrets about life and death lurking there. At that age I already had come to believe that dissection was the greatest event that separated physicians from the rest of us. To be able to stomach such an experience, I thought, would prove my mettle, and to sneak a peek into the inner workings of a body—a dead body, no less—would put me in a league beyond any other second-grader I knew. My parents, however, quickly vetoed the idea, fearing that such a close-up and possibly gruesome experience might scar me permanently.

Like all initiation rites, the dissection of the human cadaver poses several obstacles to the neophyte. First, the new medical student has to memorize a vast array of anatomical facts. Such rote memorization can be mind-numbingly dull, and the overwhelming amount of information makes the task seem Sisyphean. One of my college mentors, a brilliant psychiatrist and anthropologist, counseled me before I started. He had completed medi- cal school some twenty years earlier. “It’s like memoriz- ing a telephone book,” he said. “You just have to get through it.”

Memorization, however, is probably the easiest obstacle to surmount, and it has until recently been the only focus of medical schools. The more difficult, and often unspoken, obstacle for medical students is accepting death and the violation of the human body. In the human anatomy course, cadavers are laid before fledgling physicians, and the familiarity of their form reminds us that each lived lives not unlike our own. For those of us who wince from simple paper cuts, running a scalpel against skin and definitively dividing the essential structures that once powered a fellow human are acts that require a leap of faith. While all aspiring physicians fully expect to perform a human cadaver dissection in medical school, the expectation hardly tempers the brutal reality.

Aspiring physicians face death directly in the form of the cadaver. And then they tear it apart. Each detail of the cadaver—every bone, nerve, blood vessel, and muscle—passes from the world of the unknown into the realm of the familiar. Every cavity is probed, groove explored, and crevice pulled apart. In knowing the cadaver in such intimate detail, we believe that we are acquiring the knowledge to overcome death.

To complete the initiation rite successfully, however, we need to learn to separate our emotional self from our scientific self; we must view this dead human body not as “one of us” but as “one of them,” a medical case to be understood but not embraced. This ability to distance the self, I was to learn later, would be called upon again and again in my medical training. It was as if such separation would provide me with a greater sense of objectivity, a modicum of strength, and thus an enhanced ability to care for my patients. But this first lesson in disengaging from the personal was the most radical: it required suppressing that fundamental and very human fear of death.