Accessibility links
Next NPR coverage of Next: A Novel by Michael Crichton. News, author interviews, critics' picks and more.

The best-selling author of Jurassic Park journeys inside the world of bioengineering and genetics, in a chilling, provocative novel of near-future science run amok, in which a family finds itself in dire straits because of the genes in their bodies. 2,000,000 first printing.

NPR stories about Next

'Next' from Crichton: Genetic Technology

December 8, 2006 • Michael Crichton, best-selling purveyor of the sci-fi thriller genre, writes a novel about genetic technology and its potential results. But he's not really writing about the future in Next; it's all happening now.

'Next' from Crichton: Genetic Technology 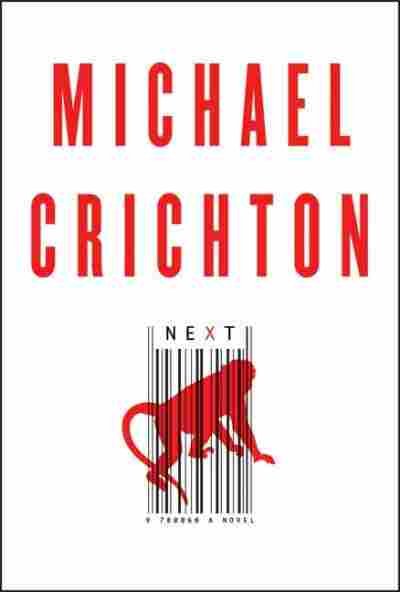 Division 48 of Los Angeles Superior Court was a wood-paneled room dominated by the great seal of the state of California. The room was small and had a tawdry feeling. The reddish carpet was frayed and streaked with dirt. The wood veneer on the witness stand was chipped, and one of the fluorescent lights was out, leaving the jury box darker than the rest of the room. The jurors themselves were dressed casually, in jeans and short-sleeve shirts. The judge's chair squeaked whenever the Honorable Davis Pike turned away to glance at his laptop, which he did often throughout the day. Alex Burnet suspected he was checking his e-mail or his stocks.

All in all, this courtroom seemed an odd place to litigate complex issues of biotechnology, but that was what they had been doing for the past two weeks in Frank M. Burnet v. Regents of the University of California.

Alex was thirty-two, a successful litigator, a junior partner in her law firm. She sat at the plaintiff's table with the other members of her father's legal team, and watched as her father took the witness stand. Although she smiled reassuringly, she was, in fact, worried about how he would fare.

Frank Burnet was a barrel-chested man who looked younger than his fifty-one years. He appeared healthy and confident as he was sworn in. Alex knew that her father's vigorous appearance could undermine his case. And, of course, the pretrial publicity had been savagely negative. Rick Diehl's PR team had worked hard to portray her dad as an ungrateful, greedy, unscrupulous man. A man who interfered with medical research. A man who wouldn't keep his word, who just wanted money.

None of that was true-in reality, it was the opposite of the truth. But not a single reporter had called her father to ask his side of the story. Not one. Behind Rick Diehl stood Jack Watson, the famous philanthropist. The media assumed that Watson was the good guy, and therefore her father was the bad guy. Once that version of the morality play appeared in the New York Times (written by the local entertainment reporter), everybody else fell into line. There was a huge "me, too" piece in the L.A. Times, trying to outdo the New York version in vilifying her father. And the local news shows kept up a daily drumbeat about the man who wanted to halt medical progress, the man who dared criticize UCLA, that renowned center of learning, the great hometown university. A half-dozen cameras followed her and her father whenever they walked up the courthouse steps.

Their own efforts to get the story out had been singularly unsuccessful. Her father's hired media advisor was competent enough, but no match for Jack Watson's well-oiled, well-financed machine.

Of course, members of the jury would have seen some of the coverage. And the impact of the coverage was to put added pressure on her father not merely to tell his story, but also to redeem himself, to contradict the damage already done to him by the press, before he ever got to the witness stand.

Her father's attorney stood and began his questions. "Mr. Burnet, let me take you back to the month of June, some eight years ago. What were you doing at that time?"

"I was working construction," her father said, in a firm voice. "Supervising all the welding on the Calgary natural gas pipeline."

"And when did you first suspect you were ill?"

"I started waking up in the night. Soaking wet, drenched."

"You consulted a doctor?"

"Not for a while," he said. "I thought I had the flu or something. But the sweats never stopped. After a month, I started to feel very weak. Then I went to the doctor."

"And what did the doctor tell you?"

"He said I had a growth in my abdomen. And he referred me to the most eminent specialist on the West Coast. A professor at UCLA Medical Center, in Los Angeles."

"Who was that specialist?"

"Dr. Michael Gross. Over there." Her father pointed to the defendant, sitting at the next table. Alex did not look over. She kept her gaze on her father.

"And were you subsequently examined by Dr. Gross?"

"He conducted a physical exam?"

"Did he do any tests at that time?"

"Yes. He took blood and he did X-rays and a CAT scan of my entire body. And he took a biopsy of my bone marrow."

"He stuck a needle in my hipbone, right here. The needle punches through the bone and into the marrow. They suck out the marrow and analyze it."

"And after these tests were concluded, did he tell you his diagnosis?"

"Yes. He said I had acute T-cell lymphoblastic leukemia."

"What did you understand that disease to be?"

"Cancer of the bone marrow."

"Did he propose treatment?"

"Yes. Surgery and then chemotherapy."

"And did he tell you your prognosis? What the outcome of this disease was likely to be?"

"He said that it wasn't good."

"Was he more specific?"

"He said, probably less than a year."

"Did you subsequently get a second opinion from another doctor?"

"My diagnosis was ... he, uh ... he confirmed the diagnosis." Her father paused, bit his lip, fighting emotion. Alex was surprised. He was usually tough and unemotional. She felt a twinge of concern for him, even though she knew this moment would help his case. "I was scared, really scared," her father said. "They all told me ... I didn't have long to live." He lowered his head.

The courtroom was silent.

"No. I'm fine." He raised his head, passed his hand across his forehead. "Please continue when you're ready."

"I got a third opinion, too. And everybody said to me that Dr. Gross was the best doctor for this disease."