Empress Wu, China's only female emperor, rises from a humble clan and position of concubine to brave the intrigues, betrayal, and violence of the court to become the first Empress of China during the great Tang dynasty in seventh-century China.

May 26, 2006 • Here's a way to travel, without suffering the high prices of fuel these days: Read one of Alan Cheuse's summer reading book picks. One of them is bound to move you someplace beyond your beach chair.

May 26, 2006 • This book is part pageant, part politics as ballet, all in all a lavish portrayal of life in early civilized China. Alan Cheuse selects Shan Sa's novel in his annual roundup of summer reading choices for All Things Considered. 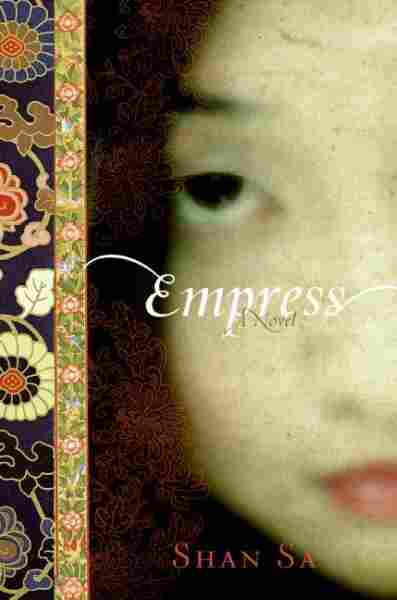 Endless moons, an opaque universe, thunder, tornadoes, the quaking earth. Rare moments of peace; forehead up against my knees, arms around my head, I thought, I listened, I longed not to exist. But life was there, a transparent pearl, a star revolving slowly on its own axis. I was blind. My eyes stared into that other world, that other existence that dwindled a little every day. Its colors were extinguished, its images blurred. I was still left with cries of astonishment and feeble sobbing. I was oppressed by the impotence of these vague recollections, burned by their melancholy. Who am I? I asked Death as it crouched at my feet. Death moaned and gave no reply.

Where am I? I could hear laughter, voices saying, "It will surely be a boy, my Lord. He is moving. He is full of life."

It mattered little who I would be. I was already weary of this vastness. I was weary of hoping, of waiting, of being myself — the center of the world.

I was soothed by the rustle of the wind. I listened to the trickle of rain. Across my sky in which the sun never rose, I could hear a little girl singing. I was lulled by her gentle, innocent voice. My sister, I foresaw great sorrow for her. A hand tried to caress me. But a wall lay between us. Oh Mother, the shadow outlined against the screen of my thoughts, do you realize I am already old, condemned to live within the prison of your flesh?

In the depths of the lake, in the sepia-colored waters, I swiveled round, curled up into a ball, spread my limbs, turned circles. Day by day my body grew, weighing heavily on me, strangling me. I would have liked to be the prick of a needle, a grain of sand, the flash of sunlight in a drop of water; I was becoming flesh, an exploding flesh, a mountain of folds and blood, a marine monster. One breath raised me up and rocked me. I was irascible. I was furious with myself, with the woman who was my jailor, with Death — my only friend.

They waited for me. I heard someone whisper that the boy would be called Heavenlight. The rustle of preparations hampered my meditation. They spoke of clothes, celebrations, wet nurses: plump, white, and sturdy. They were forbidden to speak my name, for fear that demons would possess my soul. They were waiting for me to pick up where their own destinies had left off. I felt pity for these fervent creatures, so affable and eager. They did not yet know that I would destroy their world to build my own. They did not know that I would bring deliverance — but with fire and ice.

One night I awoke with a start. The waters were seething. Furious waves broke over me. I held myself tightly, struggling with my fear and concentrating on my breathing, on my gnawing pain. When the tide surged, I was launched into a narrow opening. I slid between the rocks. My body bled. My skin tore. My head imploded. I balled my fists to stop myself from screaming.

Someone pulled me by my feet and slapped my buttocks. With my head hanging down, my cries spewed from me. I was wrapped in a cloth that flayed me. I heard a man's anxious voice: "Boy or girl?"

No one replied. The man grabbed me and tried to tear open my swaddling.

He was interrupted by a woman's quiet wail:

"Another girl, my Lord."

"Ah!" he cried before dissolving in tears.

A dozen women watched over me as I grew. Three wet nurses took turns quenching my thirst. My appetite was frightening. I was already laughing. My eyes were great black pearls rolling in their sockets. I looked on the world day and night, never wanting to sleep. My mother was worried by my constant agitation; she called on a number of exorcist monks. But no one succeeded in expelling the demon from me.

I eventually grew weary of their fears. Behind the gauze of my mosquito net, I pretended to sleep to have some peace, while a woman sang as she rocked my cradle. Another waved a fan to waft away the odd fly that had strayed into the perfumed universe. With my eyelids closed, I let my thoughts fly away.

The kingdom that Father ruled as absolute master was divided into two parts. The Front Quarter was reserved for men. Stewards, secretaries, accountants, cooks, pages, valets, grooms, guards, and lackeys busied themselves from the first light of dawn. Government officials took their orders and set off on horseback. Troops of soldiers undertook training exercises all day long in the great courtyard to the side. This virile world ended before the vermillion gate where the gynaeceum began. Behind the high, snow-colored wall lived hundreds of women: old, young, and little girls. They wore their hair in topknots pinned with flowers and had jade rings threaded into their silk belts. It was the eighth year of Martial Virtue;1 fashion favored the pallor of early spring: dresses were crocus yellow, the soft green of narcissus leaves, the pleasing pink of cherry blossom, and the crimson of the sun reflected in a lake. Sweepers, servants, seamstresses, embroiderers, bearers, wet nurses, cooks, governesses, stewards, gracious attendants, singers, dancers . . . all of them moved slowly, with composure, and spoke in hushed tones. They rose at dawn, bathed at dusk. They were the flowers of my father's garden, blossoming to compete with the beauty of one person alone.

Mother dressed soberly. Her least little cough was a command, her every gaze an order. She was naturally elegant. Fashion changed, a flitting butterfly, Mother maintained an eternal springtime. She was of the Yang clan from the Hong Nong region; one of the thirty most noble families in the Empire. As a daughter, niece, and sister to eminent ministers, a cousin to . . .