A Journey Between China's Past And Present

Chronicles the author's 7,000-mile drive across northern China, following the Great Wall, during which he investigated a historically important rural region being abandoned as young people migrate to jobs in the southeast; his five-year stay in a small farming village; and his three years of research in Lishui, a small city slated to become a major industrial center. 60,000 first printing.

May 18, 2006 • Writer Peter Hessler spent two years teaching English to young men and women who wanted to be teachers in rural schools. He reads an excerpt from his new book about one particularly memorable future teacher, and the English name he chose for himself. 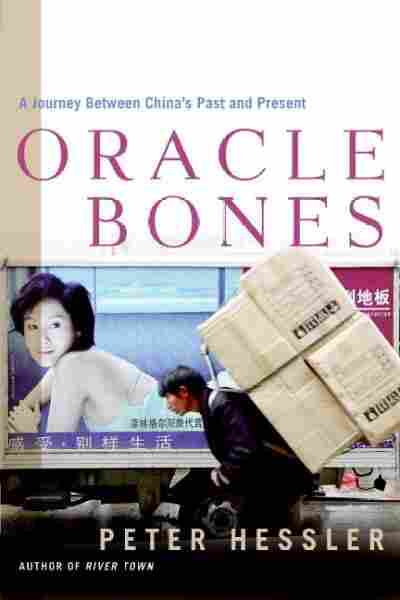 A Journey Between China's Past and Present

I was the last clipper at the beijing bureau of the Wall Street Journal. The bureau was cramped — two rooms and a converted kitchen — and the staff consisted of two foreign correspondents, a secretary, a driver, and a clipper. The driver and I shared the kitchen. My tools were a set of box cutters, a metal ruler, and a glass-covered desk. Every afternoon, the foreign newspapers were stacked above the desk. If an article about China seemed worthwhile, I spread the paper on the glass, carved out the story, and filed it in the cabinets at the back of the main office. They paid me five hundred American dollars every month.

The bureau was located in the downtown embassy district, a couple of miles from Tiananmen Square. In a neighborhood to the north, I found a cheap apartment to rent. It was a mixed area: old brick work-unit housing, some traditional hutong alleys, a luxury hotel. On one corner, next to the sidewalk, stood a big Pepsi billboard illuminated by floodlights. It was still possible to live quite simply in that part of the capital. Restaurants served lunch for less than a dollar, and I biked everywhere. When the spring evenings turned warm, young couples played badminton by the light of the Pepsi billboard.

At most other foreign bureaus in Beijing, clippers had already become obsolete, because everything was being computerized. In the old days, paper files had been necessary, and young people accepted the job because it provided an introduction to journalism. A clipper sometimes helped with research and, if a big news event broke, he might do some spot reporting. On the average, the job required only a few hours a week, which left plenty of time for travel and freelance writing. A clipper could learn the ropes, publish some stories, and eventually become a real China correspondent. I had some previous experience in the country, teaching English and studying Chinese, but I had never worked as a journalist. I arrived in Beijing with three bags, a stack of traveler's checks, and an open-ended return ticket from St. Louis. I was twenty-nine years old.

The small bureau was pleasant — the crisp smell of newspapers, the smattering of languages that echoed off the old tiled floors. The foreign staff and the secretary spoke both English and Chinese, and the driver was a heavyset man with a strong Beijing accent. While filing the clipped stories, I thought of the subject headings as another language that I would someday learn. The folders were arranged alphabetically, by topic:

During my early days on the job, I hoped that the files could provide useful training. I often pulled a folder and read through dozens of stories, yellowed with age, all of them circling around the same topic. But inevitably I started skimming headlines; after a while, even the headlines bored me. To amuse myself while working, I read the file labels in alphabetical order, imagining possible storylines to connect them:

One section of Ps read like a tragedy, complete with hubris, in all of six words:

Another series seemed scrambled beyond comprehension:

Once, I pointed out this sequence to the bureau chief, who remarked that sooner or later every China correspondent has to write an article about tea. In May of 1999, when a United States B2 plane took off from Whiteman Air Force Base in Missouri, flew to Belgrade, and dropped a series of satellite-directed bombs on the Chinese embassy, killing three Chinese journalists, the Wall Street Journal created a new file: U.S.-China — Embassy Bombing. It fit next to exchanges.

I happened to be in the southern city of Nanjing when the attack occurred. That was my first research trip: I planned to write a newspaper travel article about the history of the city, which had been the capital of China during various periods. Nanjing was the sort of place important events always seemed to march through on their way to some other destination. Over the centuries, various armies had occupied the city, and great leaders had come and gone, leaving nothing but tombs and silent memorials of stone. Even the name itself — "Southern Capital" — was a type of memory.

Artifacts had been strewn everywhere around Nanjing. Outside of town, the emperor Yongle of the Ming dynasty had commissioned the carving of the biggest stone tablet in the world as a memorial to his father, the dynastic founder. In 1421, Yongle moved the capital north to Beijing, for reasons that remain unclear, and his engineers left the tablet unfinished. Supposedly they had never figured out how they were going to move the object.

When I visited the stone tablet, there were only a handful of tourists at the site. The quarry was mostly overgrown, with young trees and low bushes creeping up the rolling hills. The abandoned memorial consisted of three parts: a broad base, an arched cap, and the main body of the tablet itself. The limestone object lay on its side, as if some absentminded giant had set it down and then wandered away. It was 147 feet long, and the top edge stood as high as a three-story building. Over the centuries, straight streaks of rain runoff had stained the stone face, like lines on a child's writing pad. Apart from those water marks, the surface was completely blank; nobody had ever gotten around to inscribing the intended memorial. Visitors could walk freely on top. There weren't any rails.

A young woman named Yang Jun staffed the ticket booth. She was twenty years old, a country girl who had come to Nanjing to find work. Young people like her were flocking to cities all across the nation — more than one hundred million Chinese had migrated, mostly to the factory boomtowns of the southern coast. Social scientists described it as the largest peaceful migration in human history. This was China's Industrial Revolution: a generation that would define the nation's future.