A leading baseball writer recounts his early years as a child in Prohibition-era New York, his relationships with his parents and stepfather E.B. White, and his interactions with numerous colleagues and sports figures.

NPR stories about Let Me Finish

May 16, 2006 • Memories, and how to capture them, are a tricky proposition, says The New Yorker's Roger Angell. He talks about the art of writing, what he learned from his stepfather, E.B. White, and his new memoir, Let Me Finish. 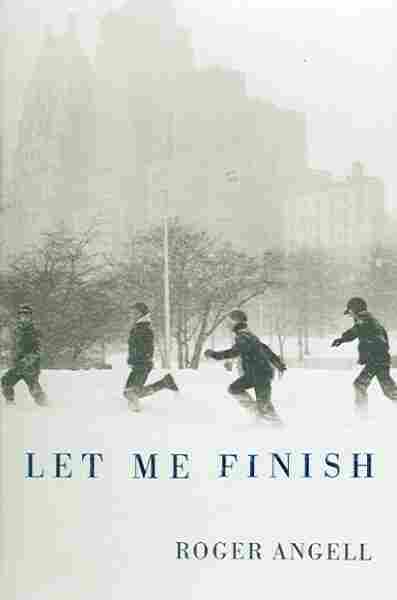 
One spring Saturday when I was seven going on eight, my mother brought me with her on an automobile outing with her young lover and future husband, E. B. White. She took our family car, a slope­-­nosed Franklin sedan, and we must have met Andy by prearrangement at our garage. He did the driving. We left New York and went up into West­chester County for lunch—this was 1928 and it was still mostly country. On the way back, my mother, who had taken the wheel, stripped the gears while shifting, and we ground to a halt, halfway onto a shoulder of the Bronx River Parkway. Disaster. Andy thumbed a ride to go find a tow truck, and my mother, I now realize, was left to make this into an amusing story to tell my father and my older sister at dinner that evening. She almost never drove—thus the screeching and scraping sounds beneath us and the agonized look on her face when she got lost in mid­-­shift and we broke down. It was also unusual, an adventure, for me to be alone with her and her office friend Mr. White, as she’d described him. I think I wasn’t meant to be there; maybe a Saturday date with a schoolmate had fallen through, and she’d had no recourse but to bring me along. But she never would have taken me off on an outing that would require me to lie about it to my father afterward, so the trip must have been presented to him beforehand as a chance for her to practice her driving, with the reliable Andy White as instructor. I had no idea, of course, that she and I were stranded in a predicament, but I recall sitting beside her on the running board of the ticking, cooling Franklin while we waited, with the pale new shrubs and pastoral grasses of the Parkway around us, and the oc­casional roadster or touring car (with its occupants swiveling their gaze toward us as they came by) swooshing past. Then a tow truck appeared around the curve behind us, with Andy White standing on the right­-­hand running board and waving excitedly. Yay, I’m back, we’re rescued! My father would never have done that—found a tow so quickly or waved like a kid when he spotted ­us.

The story stops here. I don’t remember that night or anything else about our little trip, but in less than two years my parents were divorced and my mother and Andy married and living on East Eighth Street. They soon had their own car, or cars: they kept changing. The Depression had arrived, but they were a successful New Yorker couple—she a fiction editor; he a writer of casuals and poetry and the first­-­page Comment section—and they loved driving around in an eight­-­year­-­old Pierce­-­Arrow touring car, with a high­-­bustle trunk, side mirrors, and flapping white roof. After their son was born—my brother Joel—they moved up to a staid seven­-­passenger Buick sedan. In the mid­-­thirties, Andy also acquired a secondhand beige­-­and­-­black 1928 ­Plymouth roadster—country wheels, used mostly around their place in Maine. The Buick still mattered to him. Back when it was new, thieves stole it out of a garage on University Place one night and used it in a daring bank stick­-­up in Yonkers. Andy was upset, but when he read an account of the crime in the newspapers the next day, with a passage that went “and the robbers’ powerful getaway car swiftly outdistanced police pursuers,” he changed sides. “C’mon, Buick!” he said. ­“Go!”
Every family has its own car stories, but in another sense we know them all in advance now, regardless of our age. The collective American unconscious is stuffed with old Pontiacs, and fresh reminders are never lacking. Weekend rallies flood the Mendocino or Montpelier back roads with high­-­roofed Model A’s and Chevys, revarnished 1936 Woodies, and thrumming, leaf­-­tone T­-­Birds; that same night, back home again or with our feet up at the Hyatt, we click onto TCM and find The Grapes of Wrath, or ­Bonnie and Clyde, or Five Easy Pieces, or Thelma & Louise, waiting to put us out on the narrow, anachronism­-­free mac­adam once again. (A friend of mine used to drive around the Village in his 1938 De Soto hearse, except when it was out on lease to still another Godfather movie.) Grand­children, clicking to 50 Cent or Eminem on their iPods in the back seat, sigh and roll their eyes whenever the old highwayman starts up again. Yes, car travel was bumpier and curvier back then, with more traffic lights and billboards, more cows and hillside graveyards, no air­-­conditioning and almost no interstates, and with tin cans and Nehi signs and red Burma­-­Shave jingles crowding the narrow roadside. Give us a ­break.

Still, we drove, and what startles me from this great distance is how often and how far. I was a New York City kid who knew the subways and museums and movie theatres and zoos and ballparks by heart, but in the 1930s also got out of town a lot, mostly by car. I drove (well, was driven) to Bear Mountain and Atlantic City and Gettysburg and Niagara Falls; went repeatedly to Boston and New Hampshire and Maine; drove to a Missouri cattle farm owned by an uncle; drove there during another summer and thence onward to Santa Fe and Tesuque and out to the Arizona Painted Desert. Then back again, to New York. Before this, in March, 1933—it was the week of Franklin Delano Roosevelt’s first inaugural—I’d boarded a Greyhound bus to Detroit, along with a Columbia student named Tex Goldschmidt, where we picked up a test­-­model Terraplane sedan at the factory (courtesy of an advertising friend of my father’s who handled the Hudson­-­Essex account) and drove it back home. A couple of months later, in company with a math teacher named Mr. Burchell or Burkhill and four Lincoln School seventh­-­grade classmates, I crammed into a buckety old Buick sedan and drove to the Century of Progress Exposition in Chicago; we came back by way of Niagara Falls, and, because I had been there before and knew the ropes, took time also to visit the Shredded Wheat factory, some tacky mummies, and a terrific fifty­-­cent roadside exhibition of dented and rusty, candy­-­wrapper­-­littered barrels and iron balls in which various over­-­the­-­brink daredevils had mostly met their end. With one exception, all of us in our party were still ­speaking.

If I now hop aboard some of these bygone trips for a mile or two, it is not for the sake of easy nostalgia—the fizz of warm moxie up your nose; the Nabokovian names of roadside tourist cottages; the glint of shattered glass and sheen of blood around a tree­-­crumpled gray Reo; or the memory of collies and children, unaccustomed to auto­-­motion, throwing up beside their hastily parked family vehicles—but in search of some thread or path that links these outings and sometimes puts Canandaigua or Kirks­ville or Keams Canyon back in my head when I wake up in the middle of the night. Effort can now and then produce a sudden fragment of locality: the car stopped and me waking up with my sweating cheek against the gray plush of the back seat, as I stare at a mystifying message, “VEEDOL,” painted on a square of white tin so bright in the sun that it makes me wince. Veedol? Beyond it, against the stucco gas­-­station wall, is a handmade sign, wavery in the gasoline fumes rising outside my window. Where are we? I want to sit up and ask my father, standing out there in his sneakers, khaki pants, and an old shirt with rolled­-­up sleeves, who is fishing his thick brown wallet—we’re on a long haul to somewhere—out of a hip pocket, but I’m too dazed to ­speak.

The first day of that 1933 school trip to the Chicago World’s Fair went on forever, and it was after dark when we topped a hillside in Ligonier, Pennsylvania, slowed at the vision of Pittsburgh alight in the distance, and felt a little lurch and jolt as the right rear wheel fell off the Buick and rolled gently on ahead for a few yards by itself. I can’t remember dinner, but it was past midnight when, rewheeled, we pulled up at the McKeesport YMCA and settled for two double rooms, plus cots. Jerry Tallmer, a surviving member of the party, tells me that a fellow traveler, less suave than the rest of us, confessed to him later that until this moment he’d held a childhood notion that if you weren’t in bed by midnight you died. Out in Chicago, we took in the House of Tomorrow and Buckminster Fuller’s Dymaxion Car; ogled Sally Rand’s “Streets of Paris” but didn’t attend; went to the Museum of Natural History; laughed at Chicago’s dinky elevated cars; and in our little notebooks wrote down that Depression soup kitchen lines in Chicago looked exactly like the ones in depressed New York. We were smart and serious, and would be expected to report on this trip in Social Studies, come fall. The Century of Progress, we concluded, was mostly about advertising. One afternoon, the temperature went down twenty­-­nine degrees in an hour and a half as a black storm blew in from over Lake Michigan; the next morning we read that the sightseeing plane whose ticket window we’d seen at the Fair had crashed, killing all aboard. Three days later, wheeling south from Niagara Falls, my companions (including the heroic Burkhill or Burchell, who did all the driving) offered to pay me two dollars apiece if I’d just shut up for a change, and not speak another word for the rest of the trip. Unaffronted and short of cash, I agreed, and collected my princely ten bucks while we were passing under the new George Washington Bridge, just about ­home.

All rights reserved. No part of this publication may be
reproduced or transmitted in any form or by any means,
electronic or mechanical, including photocopy, recording,
or any information storage and retrieval system, without
permission in writing from the ­publisher.

Requests for permission to make copies of any part of the
work should be mailed to the following address:
Permissions Department, Harcourt, Inc.,
6277 Sea Harbor Drive, Orlando, Florida 32887­-­6777.