A collection of revised and expanded writings culled from the author's popular Washington Post Book World "Poet's Choice" column demonstrates how poetry responds to world challenges and introduces the work of more than 130 writers.

April 8, 2006 • In Poet's Choice, author Edward Hirsch makes a case that poetry is "a human fundamental, like music." Hirsch talks poetry with Scott Simon and reads poems by Kathy Fagan and William Matthews. 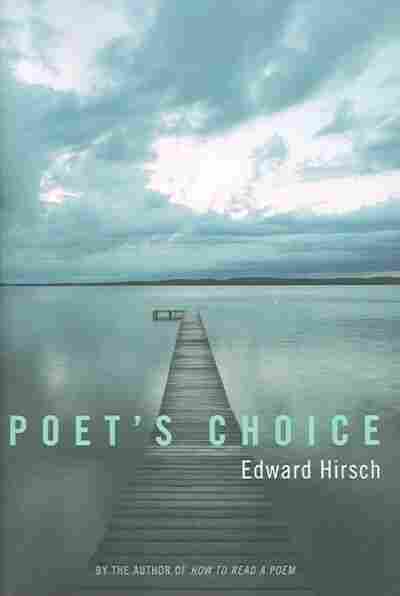 I wish I’d been on the street in Madrid on that night in 1934 when Pablo Neruda, who was then Chile’s consul to Spain, told Miguel Hernández that he had never heard a nightingale. It is too cold for nightingales to survive in Chile. Hernández grew up in a goatherding family in the province of Alicante, and he immediately scampered up a high tree and imitated a nightingale’s liquid song. Then he climbed up another tree and created the sound of a second nightingale answering. He could have been joyously illustrating Boris Pasternak’s notion of poetry as “two nightingales ­dueling.”

I once told this story to the writer William Maxwell, and he said that learning how to sing like nightingales in treetops ought to be a requirement for poets. It should be taught, like prosody, in writing programs. The Romantic poets might have agreed: Wordsworth called the nightingale a creature of “fiery heart”; Keats inscribed its music forever in his famous ode (“Thou wast not born for death, immortal bird!”); John Clare observed one assiduously as a boy (“she is a plain bird something like the hedge sparrow in shape and the female Firetail or Redstart in color but more slender then the former and of a redder brown or scorched color then the latter”); and Shelley ­declared:

A poet is a nightingale, who sits in darkness and sings to cheer its ­own solitude with sweet sounds; his auditors are as men entranced by the ­melody of an unseen musician, who feel that they are moved and softened, ­yet know not whence or ­why.

The singing of a nightingale becomes a metaphor for writing poetry here, and listening to that bird—that natural music—becomes a meta­­phor for reading ­it.

One could write a good book about nightingales in poetry. It would begin with one of the oldest legends in the world, the poignant tale of Philomela, that poor ravished girl who had her tongue cut out and was changed into the nightingale, which laments in darkness but nonetheless expresses its story. The tale reverberates through all of Greco­-­Roman literature. Ovid gave it a poignant rendering in Metamorphoses, and it echoed down the centuries from Shakespeare (Titus Andronicus) to Matthew Arnold (“Philomela”) and T. S. Eliot (“The Waste ­Land”).

One of my favorite poems about “spring’s messenger” is by Jorge Luis Borges, the Argentine fabulist, who may never have heard a nightingale, and yet, through poetry, had a lifelong relationship with the unseen ­bird.

Out of what secret English summer ­evening

or night on the incalculable ­Rhine,

lost among all the nights of my long ­night,

could it have come to my unknowing ­ear,

your song, encrusted with ­mythology,

nightingale of Virgil and the ­Persians?

Perhaps I never heard you, but my ­life

is bound up with your life, ­inseparably.
"MARGIN: 0in 0in 0pt; tab-stops: 24.0pt"
The symbol for you was a wandering ­spirit

in a book of enigmas. The poet, El ­Marino,

nicknamed you the “siren of the ­forest”;

you sing throughout the night of ­Juliet

and through the intricate pages of the ­Latin

and from his pinewoods, Heine, that ­other

nightingale of Germany and ­Judea,

Keats heard your song for everyone, ­forever.

There is not one among the shimmering ­names

people have given you across the ­earth

that does not seek to match your own ­music,

nightingale of the dark. The Muslim dreamed ­you
nt-family: 'Times New Roman'"
in the delirium of ­ecstasy,

his breast pierced by the thorn of the sung ­rose

you redden with your blood. ­Assiduously

in the black evening I contrive this ­poem,

nightingale of the sands and all the ­seas,

that in exultation, memory, and ­fable,

you burn with love and die in liquid ­song.

All rights reserved. No part of this publication may be reproduced
or transmitted in any form or by any means, electronic or mechanical,
including photocopy, recording, or any information storage and retrieval
system, without permission in writing from the ­publisher.

Requests for permission to make copies of any part of the work should be
mailed to the following address: Permissions Department, Harcourt, Inc.,
6277 Sea Harbor Drive, Orlando, Florida 32887­-­6777.