Accessibility links
Zarafa NPR coverage of Zarafa: A Giraffe's True Story, from Deep in Africa to the Heart of Paris by Michael Allin. News, author interviews, critics' picks and more.

A Giraffe's True Story, from Deep in Africa to the Heart of Paris

Title
Zarafa
Subtitle
A Giraffe's True Story, from Deep in Africa to the Heart of Paris
Author
Michael Allin

Describes how the first giraffe seen in France was captured in Africa and transported thousands of miles to Paris in a plan by the Ottoman Viceroy of Egypt, who hoped his gift would persuade Charles X not to interfere in his war with the Greeks

March 31, 2006 • Sometimes authors' best works are their first. The tale of an imaginary universe where elevators are really important and the story of the first giraffe in Europe are among librarian Nancy Pearl's selections of must-read literary debuts. 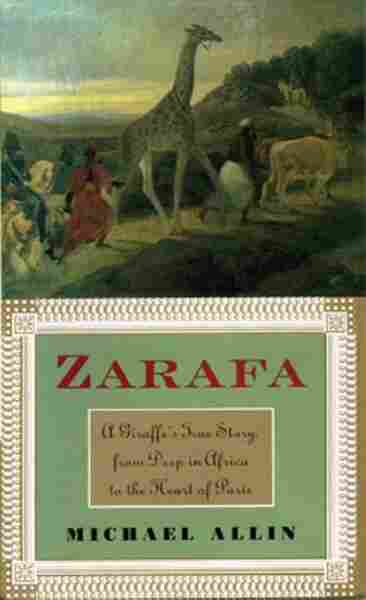 AT KHARTOUM, Shambat Bridge now spans thevery beginning of the Nile. Just south of the bridge is thepointed tip of densely wooded Tuti Island, around whichthe White Nile and the Blue Nile meet without yetmixing, converging only their widths here into the newriver.

The White Nile on the Omdurman side to the westis wider and slower, 2,000 miles from its source inLake Victoria on the equator. The Blue Nile hastraveled only half as far, easing deceptively south asthe heart-shaping point of Lake Tana before swingingwest and north to roller-coaster down out of Ethiopia.The vigor of the Blue Nile keeps it free of theparasitical flatworm that causes bilharzia (also calledsnail fever), the main symptom of which is the dysenterythat has plagued the White Nile since the ThirdWorld was the First World.

In Zarafa's time and before, until the dams upriverfrom Sennar subdued the Blue Nile, its wilder and morepowerful summer flood blocked the White Nile to astandstill at the southern end of Tuti Island. Eighty-fivepercent of the annual inundation of the Nile came fromthe Blue Nile, fecundating desert Egypt with theblack silt of the Ethiopian highlands.

Even today with the dams on both rivers, the BlueNile rises roiling dark in summer--August is still themonth of flood watch in Khartoum--while the WhiteNile, no longer impeded, creeps wider, too slowly tolose its milky blue. The two rivers are then at theirultimate contrast of color and temperament, two distantAfricas coming together and clashing for miles beforegradually merging.

In the fall their disparity subsides to two gentlydifferent currents rippling side by side under ShambatBridge, and the deeper, faster Blue Nile really is blue.Meeting it, the White Nile seems faded, older; half amile wide even at year's ebb, it is so shallow off TutiIsland that fishermen at first and last light step out oftheir boats and walk their nets midstream.

On the east bank south of Tuti Island is thepromontory, sided by both rivers, upon which theEgyptian Turks established their military outpost thatbecame Khartoum. The name Khartoum derives fromthe Arabic word for an elephant's trunk, supposed byWestern historians and guidebooks to describe theshape of the promontory. But elephant trunk does notin fact refer to the promontory. A village of riverArabs, the Mahas, had occupied this jutting corner ofland between the two Niles for at least a couple ofcenturies before the Turks founded their capital here in1824. The oldest of the seven quarters of the Mahas'village was known by its khartoum--a specificoutcropping rock that is still there near the Mahas'seventeenth-century mosque, the city's earliest, justeast of the promontory--and the Turks took the name ofthis quarter for their town.

The Mahas lived in villages all along the loopingUpper Nile in Sudan and Nubia, and wherever theyfound the topographical fact of this type of rockprotruding near or out of water, all these places carriedthe name khartoum. Long before the Turks, therewere seven khartoums south of Kalabsha.

Looping north through Sudan for 1,000 miles, theNile was blocked before the dams of the twentiethcentury by the six Cataracts between Khartoum andAswan. (Today there are only five; the SecondCataract at the Egyptian-Sudanese border is now atthe bottom of Lake Nasser.) The Cataracts are notactually waterfalls, but natural dams of elephant-grayrock that used to be more or less submerged during thesummer floods. Until the Turkish garrisons secured theUpper Nile in the early 1820s, the Cataracts did notmake the river unnavigable so much as dangerous toportage because of the Mahas and other tribes ofMuslim warriors who lived along the banks.

In the centuries before the Turks, these tribespreyed upon the caravans that linked central Africawith Cairo and the world. Seeking safety in numbers,the caravans were huge amalgamations of strangersand traders, some with whole families travelingfor years from market to market, caravan tocaravan back and forth across Africa and the MiddleEast and even all the way to China.

The most feared of the Muslim tribes along theNile were the Shaqiya between the Fourth and FifthCataracts. To avoid them, the north-south caravans leftthe Nile between Berber and Aswan for 400 waterlessdo-or-die miles across the Sahara. The desert crossingwas kept well marked by the skeletons of camels thatwere butchered as they failed along the way and wereleft with their skulls facing toward Mecca. The humansunable to continue were robbed by their companionsand abandoned to die or be killed first by marauderswho followed in wait.

For centuries the two major caravan routes acrossAfrica--Sennar to the Mediterranean, Timbuktu to theRed Sea--were slave trails to the successivecivilizations of East and West and over time on to theAmericas. The two routes intersected in the slavemarket at Shendi just north of the southernmostCataract.

Since before climatic changes created the Sahara8,000 years ago--when giraffes and elephants and otheranimals ranged the savanna clear to the Mediterranean--humanshave lived along the loops of the Upper Nile.The animals retreated south before the arid heat thathas, until now, preserved the monuments of ancientEgypt. But in Nubia and Sudan, on either side of theriver, man remained in a narrow oasis hundreds ofmiles long, sustained by an extensive irrigation systemof waterwheels and sweeps that captured the Nilebucket by bucket.

The residents of the ancient villages along the riverbetween the six Cataracts harvested crops andorchards and the forests of yellow-blooming acacias.The throat-burning resin in acacia wood is resistant toinsects and moisture, and, in addition to using the woodfor charcoal, the Nubians turned it into their boats,waterwheels, and sweeps. Dongola, the capital of thisancient kingdom, is still famous for its groves of datepalms. Downriver from Dongola, there isarchaeological evidence that the early Nubianseventually became powerful enough to take slavesfrom among their former masters, the pharaonicEgyptians; and that these Egyptian captives, as thoughironically cursed by their slaving ancestors, were buriedalive with the corpses of their Nubian owners.

Perhaps the Upper Nile's age-old history as a slaveroute is responsible, at least in part, for the sweetdignity, watchful and tinged with melancholy, that somany Sudanese today seem to share. The Republic ofSudan, only forty years independent and the largestcountry in Africa, has always been the ethnic andclimatic crossroads of the continent. Just as desertblends into rain forest 1,000 miles to the south, WhiteAfrica and Black Africa meet and meld in Sudan,darkening through the Nubians of the Sahara to thedazzling ebony Nuer and Dinka toward the equator.

The most prominent feature on a map of Sudanis the huge snaking S the Nile makes fromKhartoum to the Egyptian border. S for Sudan, which,by a topographical-etymological coincidence, is anArabic word for the "blackness" of the natives that theearly Muslims encountered along the Upper Nile. S forslaves.

IT WAS MUHAMMAD ALI'S slave trade that brought theArabs who captured and cared so well for Zarafa.What a mysterious journey it must have been forhuman and animal captives alike, out of primeval Africadown the Nile through an otherworldly desert. AtAbu Simbel, between the Second and First Cataracts,the four colossal pharaohs carved out of the cliff on thewest bank--each with its huge negroid face ofRameses II, looking more like the captives than thecaptors aboard the passing feluccas--had only recentlybeen discovered and excavated. At Cairo the Sphinx,also negroid, stared neck-deep in sand, bodilessuntil the twentieth century. Most of ancient Egyptstill lay buried either in the desert or, likethe temples of Luxor and Karnak, in centuries ofhuman rubble thirty feet deep. What was visible inZarafa's time, from Abu Simbel in the south to theSphinx in the north, inspired travelers on the Nile tofantasize that they had entered the land of an extinctrace of giants.

Egyptology began, as does the story of MuhammadAli and the giraffe he sent to Paris, with Napoleon'sinvasion of Egypt. Twenty-eight years before Zarafajourneyed down the Nile, French troops had left theirgraffiti on the ancient monuments and abandoned thegrand disaster of their conquest. The wreckage of theirships still littered the beach when Zarafa arrived atAlexandria. By then, though, the debris of theexpedition's military defeat had become a memorial toits unparalleled intellectual success, and France andEgypt had united in mutual fascination.