Today's leading thinkers on Science in the Age of Certainty

In a series of essays, more than one hundred of the world's leading thinkers—including Daniel Dennett, Steven Pinker, Richard Dawkins, Jared Diamond, and Freeman Dyson—reveal what they believe despite a current lack of supporting evidence about such topics as the future of humankind, the fate of the universe, and extraterrestrial life.

NPR stories about What We Believe but Cannot Prove

Thinkers Lay Out the Beliefs They Can't Prove

March 9, 2006 • Our beliefs often come from established theories, but what about beliefs based on theories in progress? A new book asks literary and scientific thinkers about what they believe but cannot prove.

Thinkers Lay Out the Beliefs They Can't Prove

Excerpt: What We Believe But Cannot Prove 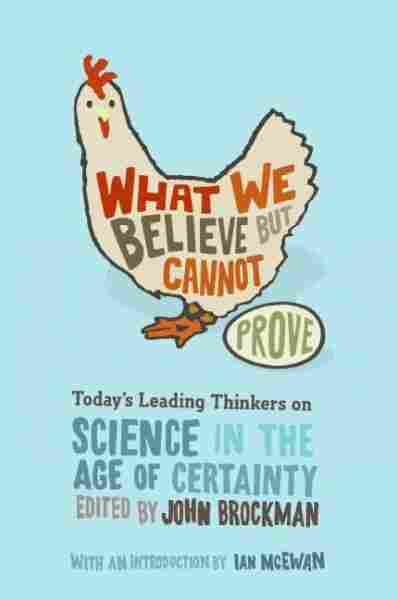 Today's Leading Thinkers on Science in the Age of Certainty

Sir Martin Rees is a professor of cosmology and astrophysics and the master of Trinity College at the University of Cambridge. He holds the honorary title of Astronomer Royal and is also a visiting professor at Imperial College London and Leicester University. He is the author of several books, including Just Six Numbers, Our Cosmic Habitat, and Our Final Hour.

I believe that intelligent life may presently be unique to our Earth but has the potential to spread throughout the galaxy and beyond it — indeed, the emergence of complexity could be near its beginning. If the searches conducted by SETI (the Search for Extra-Terrestrial Intelligence) continue to come up with nothing, that would not render life a cosmic sideshow; indeed, it would be a boost to our self-esteem. Terrestrial life and its fate would be seen as a matter of cosmic significance. Even if intelligence is now unique to Earth, there's enough time ahead for it to permeate at least this galaxy and evolve into a teeming complexity far beyond what we can conceive.

There's an unthinking tendency to imagine that humans will be around in 6 billion years to watch the sun flare up and die. But the forms of life and intelligence that have by then emerged will surely be as different from us as we are from a bacterium. That conclusion would follow even if future evolution proceeded at the rate at which new species have emerged over the past 3.5 or 4 billion years. But posthuman evolution (whether of organic species or artifacts) will proceed far faster than the changes that led to human emergence, because it will be intelligently directed rather than the gradual outcome of Darwinian natural selection. Changes will drastically accelerate in the present century — through intentional genetic modifications, targeted drugs, perhaps even silicon implants in the brain. Humanity may not persist as a single species for longer than a few more centuries, especially if communities have by then become established away from Earth.

But a few centuries is still just a millionth of the sun's future lifetime — and the universe probably has a much longer future. The remote future is squarely in the realm of science fiction. Advanced intelligences billions of years hence might even create new universes. Perhaps they'll be able to choose what physical laws prevail in their creations. Perhaps these beings could achieve the computational ability to simulate a universe as complex as the one we perceive ourselves to be in.

My belief may remain unprovable for billions of years. It could be falsified sooner — for instance, we or our immediate posthuman descendants may develop theories that reveal inherent limits to complexity. But it's a substitute for religious belief, and I hope it's true.

Ray Kurzweil is an inventor, entrepreneur, and principal developer of (among a host of other inventions) the first print-to-speech reading machine for the blind, the first text-to-speech synthesizer, the first CCD flat-bed scanner, and the first commercially marketed large-vocabulary speech recognition system. Recipient of the National Medal of Technology among many other honors, he is the author of several books, including The Singularity Is Near: When Humans Transcend Biology.

We will find ways to circumvent the speed of light as a limit on the communication of information.

As we approach an asymptote in our ability to expand inwardly (that is, using finer features), computation will continue to expand outwardly, using materials readily available on Earth, such as carbon. But we will eventually reach the limits of our planet's resources and will expand outwardly to the rest of the solar system and beyond.

How quickly will we be able to do this? We could send tiny self-replicating robots at close to the speed of light, along with electromagnetic transmissions containing the needed software. These nanobots could then colonize faraway planets.

At this point, we run up against a seemingly intractable limit: the speed of light. Although a billion feet per second may seem fast, the universe extends over such vast distances that this appears to represent a fundamental limit on how quickly an advanced civilization (such as we hope to become) can spread its influence.

There are suggestions, however, that this limit is not as immutable as it may appear. Physicists Steve Lamoreaux and Justin Torgerson of the Los Alamos National Laboratory have analyzed data from an old natural nuclear reactor that 2 billion years ago produced a fission reaction lasting several hundred thousand years in what is now West Africa. Analyzing radioactive isotopes left over from the reactor and comparing them with isotopes from similar nuclear reactions today, they determined that the physics constant a (alpha, also called the fine structure constant), which determines the strength of the electromagnetic force, apparently has changed since 2 billion years ago. The speed of light is inversely proportional to a, and both have been considered unchangeable constants. Alpha appears to have decreased by 4.5 parts out of 108. If confirmed, this would imply that the speed of light has increased. There are other studies with similar suggestions, and there is a tabletop experiment now under way at Cambridge University to test our ability to engineer a small change in the speed of light.

Of course, these results will need to be carefully verified. If they are true, it may hold great importance for the future of our civilization. If the speed of light has increased, it has presumably done so not just because of the passage of time but because certain conditions have changed. . . .