Title
The Accidental Empire
Subtitle
Israel And the Birth of the Settlements, 1967-1977
Author
Gershom Gorenberg

Discusses the creation of Jewish settlements in territories seized following the 1967 Six-Day War, the actions and inactions that led to the move into occupied regions, and the long-term implications of the move.

NPR stories about The Accidental Empire

March 7, 2006 • The Six-Day War of 1967 left Israel with a dilemma: what to do with the land it had taken in the process of winning a conflict that also involved Egypt, Syria and Jordan. A new book, The Accidental Empire, looks at what came next. 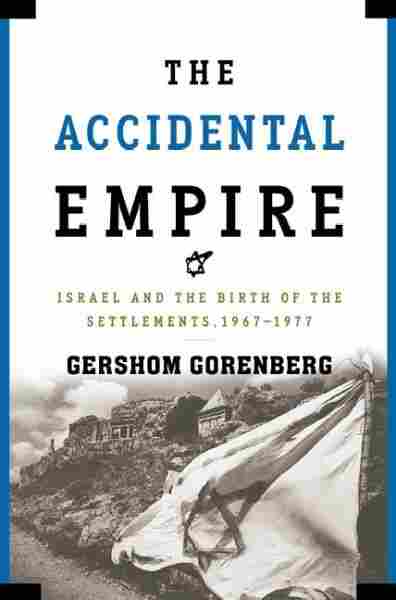 “We are divided,” Haim Gouri’s mother had taught him, “between those with meager spirits and those with torn souls.” That night, more than ever, Gouri counted himself as one of the raggedly ripped souls, and he envied the other sort.1

A solitary Israeli army jeep growled north from Jerusalem on the road winding through the dark hills of the West Bank. A soldier drove, another carried a gun to protect Gouri and his wife, Aliza, who had insisted on coming along though she could not understand how he had thrust himself into this madness.

The moon, only a narrow crescent, an accidental pencil stroke of light on the December sky, had already set when the jeep pulled out of its Jerusalem base near midnight. They rode though Ramallah and past the shadowed Arab villages strung out along the mountain ridge, and on through Nablus, where by daylight Palestinian demonstrators had littered the road with burning tires, and headed on. Yitzhak Rabin, the prime minister, had insisted that Gouri—a poet and journalist turned negotiator on a moment’s whim—could not go this way at night in his own car to carry a message from the government.2

Fifty-two years old, Gouri had a face made of sharp angles: sharp chin and nose, sharp brows above deep-set eyes. Eight and a half years before, on the third day of the Six-Day War of 1967, he had worn a uniform himself as he drove north in a convoy from Jerusalem toward newly conquered Ramallah, a platoon commander in the reserves called up for duty in a sudden conflict. That time, a June sun had drenched the hills. The land he passed through had been part of the British-ruled Palestine of his youth, but had lain, unreachable, beyond the frontier since Israel’s establishment in 1948. “It seemed to me I’d died and was waking up, resurrected,” he had written in June 1967. “All that I loved was cast at my feet, stunningly ownerless, landscapes revealed as in a dream. The old Land of Israel, the homeland of my youth, the other half of my cleft country. And their land, the land of the unseen ones, hiding behind their walls.”3

The memory still shone, incandescent, whenever he came this way, though he had since concluded that the war had “liberated the land but torn the nation”—deeply dividing Israelis about whether the land taken in the battles against Jordan, Egypt, and Syria was liberated or occupied, about whether Israel must hold some or all or none of it, about how to see the “unseen ones”—the Arabs who lived there. On this cold night, Gouri feared the nation was on verge of brother fighting brother.4

North of Nablus, next to the village of Sebastia, the jeep turned onto a dirt road lined with pines and cypresses. A two-story stone building, an abandoned train station at which passengers had last alighted when the British ruled Palestine, overlooked a narrow valley splotched with the glow of campfires.

“The scene was surrealistic,” Gouri would recall. Thousands of people waited in freezing cold. Most were Orthodox Jews, young men and women and teenagers, the armies of the night, camped out here in defiance of Rabin’s government, aflame themselves with the passion of demonstrators anywhere who are many and certain. They were there demanding that Rabin allow Jews to settle on the outskirts of Nablus, to stake a claim that would keep Israel from giving up part of the ancient homeland in return for peace. They sought to shatter a policy that said the hill country should be set aside, to be conceded when the time came, in order to avoid permanent Israeli rule over its Arab population. For a week, the crowd in the valley had grown and shrunk and grown, tense with the possibility of confrontation and the improbable hope of victory. Around them waited soldiers, ready for orders to pull them, struggling, onto buses and—as Gouri noticed with sardonic fury—meanwhile protecting the law-defying settlement supporters from the Palestinians demonstrating against their presence.5

Gouri had come earlier that day as a journalist, to look and write. The would-be settlers conjured up passions he remembered from his own days in a socialist youth movement intoxicated with the land; and they conjured up fear of anarchy, the collapse of the state.

“Happy are the whole, and woe to the torn . . .” he wrote that week, describing his visit. “In my life, too, there have been times when I’ve been at one with a deed. Today, too, I’m utterly at one with a few principles. But this time I wander torn among people swept up in messianic fervor.”6 He wanted this confrontation to end peacefully, within the rules; he feared the shock waves in a fractured nation if one pregnant woman were to miscarry as she was pulled to the buses. So he had stepped out of the role of journalistic witness and into the role of actor, proposing a compromise—to his old comrades-in-arms who now ruled the country, and now, with their approval, the handwritten terms scrawled by a senior cabinet minister, to the organizers at Sebastia. Inside the train station, the leaders of the Gush Emunim, Israel’s most successful protest movement, argued through the night about whether Gouri’s compromise meant victory, as Gouri and his wife shivered outside.


In the uncertain memory of many Israelis and Israel-watchers, the issue of settlement in occupied land began in the struggle between Yitzhak Rabin’s first government in the mid-1970s and the young radicals of Gush Emunim. The story therefore becomes a simple one: On one side are the secular pragmatists of the left; on the other, the religious fanatics of the right. Or—in another telling that changes the labels without drastically changing the script—on one side are uninspired defeatists; on the other, the truest patriots.

In either telling, the confrontation at the Sebastia train station in the first week of December 1975 marks the point of departure for a long and contentious journey. Gush Emunim and its successors have gone on to build communities throughout the territories Israel overran in June 1967. Settlers have benefited from government support, especially after Israel’s Labor Party lost power to the right-wing Likud bloc in 1977—and yet, again and again, some have also clashed with the state, at times violently. The question of whether the settlement imperative or democracy takes precedence has threatened to rip Israel apart.

In accounts of Mideast diplomacy as well, the settlements first appear in the mid-1970s, as if from nowhere, with no explanation of how they appeared on the landscape.7 Since then, Israel’s settlements have seized an ever more prominent place on the international agenda. The most accepted approach to ending the entanglement of Israelis and Palestinians requires dividing the land that both consider their home. And the very purpose of settlements is to stand in the way of Israel forfeiting the land it took in 1967, or at the very least, to ensure that it will retain as much of that land as possible.

In his eighties, one of the most renowned poets in a country where poets achieve popular stardom, Haim Gouri says today that getting involved at Sebastia was “the greatest foolishness of my life.” His hope that a compromise would restore “the rules of the game” of civil discourse and law has proven vain. Long after Sebastia, he has watched Israeli soldiers struggle with defiant settlers. He has been accused, he says with pain, of being “the father of the settlements,” as if he will be remembered for that and his poems will be fo