A Saga of the Prairie

After settling in South Dakota, Per Hansa, a Norwegian, tries to change his wife's attitudes about their new life.

NPR stories about Giants in the Earth

'Giants in the Earth' by Ole Edvart Rolvaag

February 14, 2006 • Art, a listener from central Pennsylvania, recommends this story of a Norwegian pioneer's family: "Hardly a winter passes when I don't think about the struggles faced by the Per Hansa family in the bitter [Dakota Territory] winters."

Excerpt: Giants In The Earth 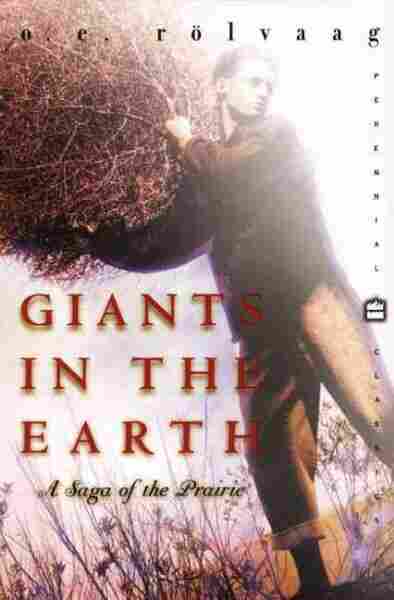 A Saga of the Prairie

Bright, clear sky over a plain so wide that the rim of the heavens cut down on it around the entire horizon.... Bright, clear sky, to-day, to-morrow, and for all time to come.

.... And sun! And still more sun! It set the heavens afire every morning; it grew with the day to quivering golden light-then softened into all the shades of red and purple as evening fell....Pure colour everywhere. A gust of wind, sweeping across the plain, threw into life waves of yellow and blue and green. Now and then a dead black wave would race over the scene....a cloud's gliding shadow....now and then....

It was late afternoon. A small caravan was pushing its way through the tall grass. The track that it left behind was like the wake of a boat-except that instead of widening out astern it closed in again.

"Tish-ah!" said the grass.... Tish-ah, tish-ah!.... Never had it said anything else-never would it say anything else. It bent resiliently under the trampling feet; it did not break, but it complained aloud every time-for nothing like this had ever happened to it before.... "Tish-ah, tish-ah!" it cried, and rose up in surprise to look at this rough, hard thing that had crushed it to the ground so rudely, and then moved on.

A stocky, broad-shouldered man walked at the head of the caravan. He seemed shorter than he really was, because of the tall grass around him and the broad-brimmed hat of coarse straw which he wore. A few steps behind him followed a boy of about nine years of age. The boy's blond hair was clearly marked against his brown, sunburnt neck; but the man's hair and neck were of exactly the same shade of brown. From I the looks of these two, and still more from their gait, it was easy to guess that here walked father and son.

Behind them a team of oxen jogged along; the oxen were drawing a vehicle which once upon a time might have been a wagon, but which now, on account of its many and grave infirmities, ought long since to have been consigned to the scrap heap-exactly the place, in point of fact, where the man had picked it up. Over the wagon box long willow saplings had been bent, in the form of arches in a church chancel-six of them in all. On these arches, and tied down to the body on each side, were spread first of all two handwoven blankets, that might well have adorned the walls of some manor house in the olden times; on top of the blankets were thrown two sheepskin robes, with the wool side down, which were used for bedcoverings at night. The rear of the wagon was stowed full of numberless articles, all the way up to the top. A large immigrant chest at the bottom of the pile, very long and high, devoured a big share of the space; around and above it were piled household utensils, tools, implements, and all their clothing.

Hitched to this wagon and trailing behind was another vehicle, homemade and very curious-looking, so solidly and quaintly constructed that it might easily have won a place in any museum. Indeed, it appeared strong enough to stand all the jolting from the Atlantic to the Pacific.... It, too, was a wagon, after a fashion; at least, it had been intended for such. The wheels were made from pieces of plank fitting roughly together; the box, considerably wider than that of the first wagon, was also loaded full of provisions and household gear, covered over with canvas and lashed down securely. Both wagons creaked and groaned loudly every time they bounced over a tussock or hove out of a hollow....Squeak, squeak!" said the one.... Squeak, squeak!" answered the other....The strident sound broke the silence of centuries.

A short distance behind the wagons followed a brindle cow. The caravan moved so slowly that she occasionally had time to stop and snatch a few muothfuls, though there was never a chance for many at a time. But what little she got in this way she sorely needed. She had been jogging along all day, swinging and switching her tail, the rudder of the caravan. Soon it would be night, and then her part of the work would come-to furnish milk for the evening porridge, for all the company up ahead.

Across the front end of the box of the first wagon lay a rough piece of plank. On the right side of this plank sat a woman with a white kerchief over her head, driving the oxen. Against her thigh rested the blond head of a little girl, who was stretched out on the plank and sleeping sweetly. Now and then the hand of the mother moved across the child's face to chase away the mosquitoes, which had begun to gather as the sun lowered. On the left side of the plank, beyond the girl, sat a boy about seven years old — a well-grown lad, his skin deeply tanned, a certain clever, watchful gleam in his eyes. With hands folded over one knee, he looked straight ahead.

This was the caravan of Per Hansa, who with his family and all his earthly possessions was moving west from Fillmore County, Minnesota, to Dakota Territory. There he intended to take up land and build himself a home; he was going to do something remarkable out there, which should become known far and wide. No lack of opportunity in that country, he had been told!.... Per Hansa himself strode ahead and laid out the course; the boy Ole, or Olamand, followed closely after, and explored it. Beret, the wife, drove the oxen and took care of little Anna Marie, pet-named And-Ongen (which means "The Duckling"), who was usually bubbling over with happiness. Hans Kristian, whose everyday name was Store-Hans (meaning "Big Hans," to distinguish him from his godfather, who was also named Hans, but who, of course, was three times his size), sat there on the wagon, and saw to it that everyone attended to business.... The cow Rosie trailed behind, swinging and switching her tail, following, the caravan farther and farther yet into the endless vista of the plain.