Raised from infancy by their grandmaster, twelve-year-old Fu and his temple brothers Malao, Seh, Hok, and Long think of their temple as their home and their fellow warrior monks as their family, so when the temple is destroyed by an army led by a former monk Ying, they set out to uncover the secrets of their past, which their grandmaster has promised, is connected to Ying's.

November 23, 2005 • Karen Grigsby Bates talks to Jeff Stone, author of The Five Ancestors — a multi-book saga for young adults that follows the adventures of five boys raised in a Buddhist monastery. They avenge the destruction of their temple and the murder of its abbot using kung fu martial art skills. 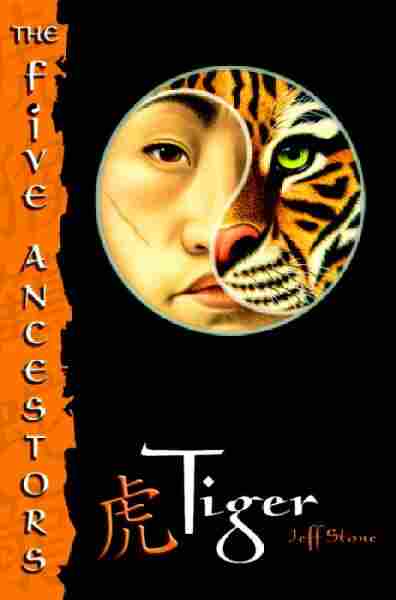 “This is stupid,” Fu mumbled from the bottom of the terra-cotta barrel. “How long do we have to stay inside this thing? I feel like a pickled vegetable.”

“Shhh!” warned his brother Malao, lying directly on top of him. “Grandmaster told us to remain perfectly quiet, and perfectly still.”

“I know what Grandmaster said,” Fu replied. “But we can’t stay crammed in here forever. I say we get out right now. I say we stop hiding and fight!”

“Calm yourself, Fu,” whispered his brother Seh from on top of Malao. “We are all just as cramped and uncomfortable as you are. But we must do as Grandmaster said and remain silent and hidden. The enemy within our walls is unlike any faced by Cangzhen Temple in more than a thousand years.”

“Yeah, yeah,” Fu said. “Stop being so dramatic. You guys are sounding more and more like Grandmaster every day. I don’t care who’s out there. We’re all masters now. We’ve all passed the tests. We shouldn’t be hiding like a bunch of girls. We should be—”

“Quiet!” hissed Fu’s oldest brother, Long, from the top of the pile. “Control your tongues, all of you! Brother Fu, empty the words from your mouth and then empty your mind. You must take control of your thoughts and your emotions, or they will control you.”

“You must take control of your thoughts and your emotions, or they will control you,” Fu mocked. “Give me a break, Long. Right now we need action, not philosophy.”

Fu was quickly losing his patience. He could hear enemy horses racing up and down the brick pathways that crisscrossed the temple grounds. He also heard weapons clashing and men crying out—plus a terrible, new sound. It was almost like thunder, except every boom was followed by a pain-filled scream. Fu’s keen ears recognized each and every scream. Warrior monks were falling.

A low growl resonated deep within Fu’s chest. He didn’t understand why his four brothers, stacked above him in the barrel, were holding back. Like him, each had mastered a style of animal kung fu that reflected both his personality and his body type. In fact, their true natures were so perfectly matched with their kung fu styles that they were each named after the animal they mirrored. They were born to fight. But they wouldn’t.

Fu, the tiger, growled again. His brothers didn’t look like him, walk like him, talk like him, or even smell like him. And they certainly didn’t think like him. He called them “brothers” because they all were Buddhist and lived in the temple together. In reality, he and his “brothers” were orphans. What Fu needed were real brothers. Brothers who would fight alongside him.

Fu grunted under the weight of the others. “I can’t believe we are just going to—”

“Please!” Long interrupted. “No more talking! We all have to remain silent. Brother Fu, focus your breathing. Meditate like the rest of us have been doing. If you find that you cannot meditate, just lie still and relax.”

“That’s easy for you to say,” Fu replied. “You’re on top. Try lying down here at the bottom of the pile in a pool of water with Malao’s nasty feet pressing up against your lips.”

How much longer am I going to be stuck in here? Fu wondered. He hoped for his brothers’ sake they would all get out of the barrel soon, because he wasn’t sure if he could control himself much longer.