A Yearlong Search for the Continent's Natural Soul

One of the world's premier writer/naturalists surveys the state of North America's wilderness areas, revealing both positive and negative perspectives on wildlife management in the U.S. and Canada.

Bounty for the Nature Nut

November 29, 2005 • A rain barrel is rather tough to wrap, so if you're looking to give nature nut and All Things Considered commentator Julie Zickefoose a gift, here's a list of books and music. 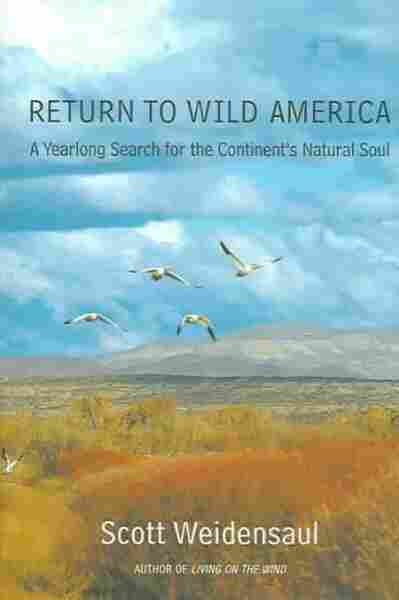 In the early 1950s, just getting to Cape St. Mary's was an adventure. The Avalon Peninsula is the easternmost prow of North America--a vaguely H-shaped chunk of land that is very nearly an island itself, attached to the rest of Newfoundland by the slenderest of threads. It is rimmed by sheer cliffs, by beaches of dark quartz-shot cobblestones and wave-smashed capes. Where there is forest, it is somber and mossy, spruce and balsam fir hung with long pale sheets of lichen dangling from the branches like rotting curtains. But much of the Avalon is tundra, known locally as barrens--an open, windswept land home to flocks of ptarmigan and the southernmost wild caribou herd in the world, where the trees, if they grow at all, cower in dense, waist-high thickets known as tuckamore.

When Fisher and Peterson met here to begin their journey, Newfoundland was very much a world apart, sparsely populated and isolated from the rest of the country not only geographically but also politically; it had confederated with Canada only four years earlier, ending its long history as a separate dominion of Great Britain. Most of the people lived in remote fishing villages called outports accessible only by sea, and beyond the handful of large towns like St. John's the few roads were largely dirt and gravel, and at times all but disappeared into the spruce bogs.

Accompanied by the local ornithologist Leslie Tuck, the two travelers spent a long day bouncing south from St. John's on awful roads. Fisher, keyed up to see new birds, found himself "seeking the differences and finding the similarities"; the first North American species he saw was a gannet, which was also the last British species he'd seen as his plane crossed the Scottish coast. This isn't surprising; few places in North America have as strong an Old World flavor, at least in terms of natural diversity, as Newfoundland. The landscape, Fisher thought, was strikingly similar to the spruce forests he'd known in Sweden, and of the forty-six species of birds they saw, almost two-thirds were ones he knew from Europe. He was stunned to find that the most common birdsong in the dark conifer woods was "a voice as familiar to me in my own English garden as on the cliffs of St. Kilda and the remote Shetland Islands"--that of the tiny winter wren. Though a common backyard bird in Great Britain, in North America it inhabits only the boreal forests of the North or high elevations.

They spent the night in the fishing hamlet of St. Bride's, where the navigable road ended, and the next day--with a local guide and a pony to carry Peterson's heavy camera gear--they set off for the great seabird colony near the Cape St. Mary's lighthouse, ten miles down the coast. The special attraction would be thousands of northern gannets, majestic seabirds with six-foot wingspans and an extraordinary means of fishing in which they plunge, like white lances, straight down from more than a hundred feet in the air, hitting the water like Olympic high divers to intercept fish far beneath the surface. Fisher was perhaps the world's leading authority on gannets, and he was anxious to see them on this side of the Atlantic.

"The most spectacular New World [gannet] colony, the one at Bonaventure Island off the Gaspé, is visited by scores of bird students every year," Peterson noted. "It has become a profitable thing for the innkeeper to cater to--and even advertise to--an unending succession of summer gannet watchers.On the other hand, the colony at Cape St. Mary['s] sometimes goes for several years unvisited by any of the field-glass fraternity." It was easy to see why. The exhausting hike, first along a muddy, rutted cart track, and then overland around treacherous bogs, took them until early afternoon, and they didn't make it back to St. Bride's until well after midnight, Peterson limping from a badly strained leg muscle.

It's a safe bet that Peterson and Fisher would find Cape St. Mary's today a strange, perhaps disquieting blend of the familiar and the unfamiliar. I flew into St. John's with my fiancée, Amy Bourque, who was taking some time off from the Audubon sanctuary she ran in Maryland to get me started on my way and would join me at a couple of other points in the year ahead. Our drive from St. John's to St. Bride's took a couple of easy hours in a rental car, with just one stretch of gravel track that skirted bogs bounded by stands of pink rhodora azaleas. It was a cold day in the middle of June; the sedges and irises made an emerald splash along the coffee-colored rivers, where a few blackish spruce grew, but higher up, the still-brown tundra rolled inland beyond the limit of vision, empty of any sign of humanity.

The reason for this little slice of the Arctic, at the same latitude as Montreal and Seattle, is the ocean. Pack ice surrounds much of the Avalon Peninsula until April or May, and throughout the summer icebergs that originated in Greenland are a common sight, floating south on the Labrador Current. Especially along the immediate coastline, summer fogs are an almost daily event, bathing the land in damp cold that counteracts the wan heat of the sun. This creates an ecosystem known as hyperoceanic barrens--a nearly horizontal plant community dominated by ground-hugging Arctic species like crowberry, several species of cranberries, hardy grasses, and pale reindeer lichen in spongy green-white mats, into which a hiker sinks ankle-deep. Dwarf Arctic willows, with trunks barely as thick as a finger, spread over rocks like a green cascade, raising maroon flowers five or six inches above the ground, their diminutive stature masking the fact that these trees are often three or four hundred years old, as deserving of awe as any craggy old-growth pine.

From the air, the center of the Avalon Peninsula, and its southern capes in particular, appear pale brown, edged with black; the brown is the tundra barrens, while the darker rim is the spruce woods, which cling to the lower elevations and deeper river valleys. We spent part of one day hiking along some of the rivers that cut across the barrens, providing a convenient pathway in the otherwise featureless landscape. The only green was down along the water, where thick grass and irises were sprouting, but when we looked closely, the tundra was coming into great flower as well.

To my eye it all looks like classic Arctic tundra, but there are enough floral differences that a botanist would immediately peg this as Newfoundland barrens: a spongy, wet mat of sphagnum moss and crowberry studded with pitcher plant, the diminutive white flowers of goldthread, and the pink of pale laurel, barely an inch high. Cloudberry, Newfoundland's famous "bake-apple," was just opening its single white flowers that would, by August, produce the delicious clear orange raspberries that are a provincial obsession. Much of the ground was covered in creeping juniper or, where there was a bit more shelter, patches of spruce tuckamore that were barely waist-high but might be four or five hundred years old.

The wind howled, and for five minutes a cold, heavy downpour soaked us before the sun peeked back out apologetically. We hiked an hour or so down the main river, then looped back and struck a smaller tributary, which had cut a confused series of low gorges in the rock--a creek maybe thirty feet wide, the water so stained with tannin it was nearly black. It was fed by a series of small pools and ponds on the higher ground to either side; some of these were jewel-like, surrounded by sedges and irises, set in little steep-sided dells where the wind couldn't reach and the dark water reflected the sky like glass. In one, a yellow-rumped warbler alit on a rocky shelf above the water, blue-gray against the yellow lichen, flew down to splash with its reflection, then whirled off with a single chip.

More than a thousand square kilometers of the central Avalon are protected as a wilderness reserve, but even the margins are largely wild, largely wild, largely empty land. The only paved road is a loop that skirts the edge of the sea, linking the small towns like St. Shott's and Trepassey, with a handful of dirt tracks like the one that runs down to the old lighthouse at Cape Race, where we were paced by swift-flying horned larks and found the remains of a freshly killed murre on a low bluff beside the sea, its feathers gently waving in a long plume to the leeward where a peregrine falcon had sat and plucked it. Its skeleton was still wet and bloody, the two black wings untouched, but the falcon was gone.