by Katy Kelly and Adam Rex

NPR stories about Lucy Rose, Here's the Thing About Me

Excerpt: Lucy Rose, Here's The Thing About Me 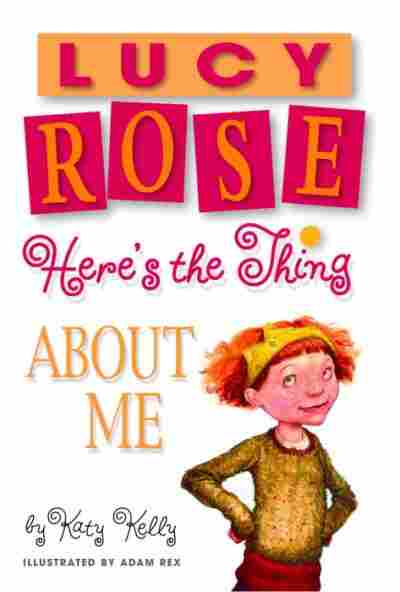 Here is the thing about me: According to my dad, I am one smart cookie. And according to my grandfather, I have the kind of life that is called eventful, which means NOT boring. That is probably because my whole family is not boring, except for maybe my baby cousin, Georgie, but I don't think it's fair to judge if a person is boring until after they know how to talk. My grandmother is extremely not boring.

Here is the thing about my grandmother: She acts like her dog can tell time. When she is getting ready to go out she says, "Gumbo, I am going out to give a speech and I'll be back home at six-thirty." Then Gumbo, who is the biggest kind of black poodle you can get, clomps around making toenail noises on the hall floor. Then my grandmother says, "His behavior has been much better since I started telling him my schedule." I think this is wacko but it does tell you something about my grandmother. And just so you know, I mean wacko in a good way.

Another thing about her is that she has the exact same name as me: Lucy Rose. She is 58 and I am 8. We are both short for our age. Plus she is a writer and starting today, I am too. I am writing about my eventful life. But I am skipping the days that are not so interesting. That way there will be no dull parts.

The reason, by the way, that my grandmother makes speeches is that she is an expert on children. She has a column in the newspaper and people write her letters and ask how they can make their kids shape up and she tells them what to do. I am not a bragger so I do not tell that my grandmother is an expert but a lot of grown-ups guess, because the name of her newspaper column is "Dear Lucy Rose" and there is a picture of her at the top plus she comes to pick me up after school when my mother is working overtime. The problem with having an expert for a grandmother is that some people, when they see me doing something that she would definitely NOT recommend, like on the second day of school when I poked Adam Melon with a stick which he deserved, they tell her and then she tells my mother and then I am in for it.

When that happens my mom and I have to have a BIG CHAT and she says, "What came over you, Lucy Rose?"

Then I make my shoulders go all shruggy.

And then she says, "Let's talk about your feelings."

Then if I am in a sassy mood I say, "I am feeling like I would like to watch a little TV."

And then she says, "This is serious, Lucy Rose."

So I say, "Seriously, I am feeling fine."

And she says, "Really, Lucy Rose, tell me your true feelings."

And that conversation can go on for quite a little while.

My mother's name is Lily Reilly and she has light brown hair that is straight as string and she is five feet and one inch tall and she weighs one hundred and ten pounds exactly. She is fond of doing yoga, which is one boring sport if you ask me. Also she is an artist who works for a TV station that mostly shows the news. So a lot of times she draws maps. She would rather be an artist who draws children's books but we have a mortgage to pay. Most kids don't know about mortgages but I do because my mother is a big one for explaining things and one thing she explained is that a mortgage is how you pay for your house. "You have to send a check for it every single month," she told me. But that is A-OK with my mother because she is wild for our house.

We moved to Washington, D.C., this summer from Ann Arbor, Michigan, which is where we used to live before my parents got separated. My true feelings about that are NOT fine. They are yuck. My mom says that is to be expected but I am telling you one thing, I didn't expect it at all.

In Ann Arbor we lived in the suburbs and our house had a big yard and a garage and a family room. My dad still lives in it. He says my room will always be my room and I am glad about that because even though it still has the circus wallpaper from when I was a little kid, and even though some of it is a little peeling where I picked at it when I was supposed to be taking a nap, I feel fond of that room.

Our Washington, D.C., house is a city house. It has a little white porch with a swing big enough for two people and a pig-shaped weather vane on the roof and no garage because when you live in the city you can walk to a lot of places and take the subway which is called the Metro. I am not one who likes waiting around for rides but I do think it's odd not having a car which we don't because my mom thinks they are expensive and not necessary. Plus, she says, if we need to drive someplace far away we can always borrow my grandparents' station wagon.

Our city backyard is puny but it has a blackberry bush and last month when it was August we got enough of those berries to make one pie big enough for two people and when it was cooked my mom and I sat on the swing and ate it all up.

At my new house I got to pick the color for my room and I picked red which my mother and my grandmother said would drive me crazy but doesn't. Plus it's original and according to my grandfather I am an original thinker.

When I talked to my dad on the phone yesterday, I told him what my grandfather said and my father told me, "It's true, Lucy Rose. You have a one-of-a-kind mind." That is a good compliment, I think.

It's because of my original thinking that I got this book that I am writing in right now. Yesterday afternoon Pop came in from a walk and gave me a little bag from the Trover Shop and inside it was this book that is red on the cover and white on the inside and on the edge is a loop that has a golden pen in it. I think most people who would get a book like this would be at least twenty years old and probably in college. Pop told me that I should write in my red book whenever I think of something that is important or funny which I do a lot of the time.

My grandparents live three blocks away from me in a three-story-tall house that my grandfather has lived in since he was born which was an extremely long time ago. It has NINE porches, some of them on the second floor that you can only get on if you climb out of the window which is something I get to do a lot because my grandmother is on a campaign against pigeons and she sends me out to stomp around and scare them away.