A Life in Politics

The senior senator from Mississippi recounts his political career, from his efforts to broaden Republican influence to his differences of opinion with the Bush administration and the scandal that preceded his resignation as House majority leader.

December 1, 2005 • Trent Lott, the Republican senator from the state of Mississippi, was the Senate majority leader from June 1996 to January 2001. He is the author of the memoir Herding Cats: A Life in Politics.

October 2, 2005 • Sen. Trent Lott talks with Debbie Elliott about politics past and present, from the civil rights era of the 1960s to federal disaster relief for hurricane victims. He has a new memoir, Herding Cats: A Life in Politics.

Sen. Trent Lott Reflects on a Life in Politics

August 24, 2005 • Sen. Trent Lott, the Republican from Mississippi, has a new memoir called Herding Cats: A Life in Politics. Lott was the Senate majority leader from June 1996 to January 2001. He resigned from his position in 2002 after making racially divisive remarks.

Sen. Trent Lott Reflects on a Life in Politics 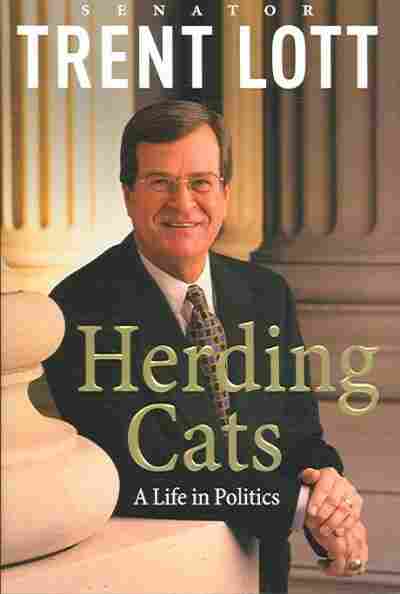 A Life in Politics

Pascagoula, Mississippi, December 20, 2002. Dawn appeared quiet and clear on the Friday morning that would change my life irrevocably. The winter sun turned the ripples on the Gulf of Mexico into that state of mottled silver so distinctive to the Mississippi coast. Even the Gulf itself was flat and glassy, a beautiful setting as the city around me plunged into the Christmas season. My house looks out over an expanse of grass and trees to the breakwater, and beyond that to the windswept Gulf Islands barely visible through the marine haze. From the back windows you can see a graceful neighborhood of distinctive homes meandering through the remains of a centuries-old grove of live oak trees, including some used to shelter horses during the Civil War.

I'd been pacing my historic beach residence since early morning, stopping occasionally to watch the pelicans dive into the Gulf, then soar from the surface with their catch. But my real purpose was to keep a wary eye on the ragtag army of press representatives who had appropriated private land to stake out my home from every angle. They had been there ever since the remarks I'd made about Senator Strom Thurmond at an affair celebrating his one hundredth birthday.

The Internet bloggers, television talking heads, and newspaper pundits had transformed those forty words into a racial furor ten days earlier. My innocent and thoughtless remark was treated by most of the media as a hanging offense. They had created a deafening hell with their voices, their ubiquitous cell phones, and even their rehearsal microphones, as their voices echoed brashly through my calm and sedate neighborhood. Their vans and satellite trucks — a collective eyesore on wheels — kept the engines running, the easier to crush rose bushes and snap the branches off green and red holly bushes as the vehicles darted this way and that.

Not even the gathering holiday spirit diminished their desire to film and record my family every chance they got — even if it was only for a few seconds.

My wife, Patricia (Tricia for short), sat at the kitchen bar writing out the last of the Christmas cards, making her presence known but distancing herself from the personal and momentous decision that was mine alone to make. Heirloom tree ornaments, only partially unpacked, lay scattered about the house, filling chairs and sofas. The season of joy to the world had been dampened; decorating would have to wait.

Every so often I ambled into my office to work on the political statement I was preparing, crossing out sentences, adding others — still trying to improve the language even as I briefly wondered whether I should make this statement at all. The media had already darkened my character; a formal statement might just fire them up again.

I'd returned to Mississippi, my spiritual life source, a week earlier to deal with the Thurmond drama on my home turf. As my pen scrawled across paper, I could hear the cars and trucks of dozens of Mississippians as they drove by in silent support. Occasionally, a young voice rang out, "We're with you, Lott. You're the man!" And I gratefully smiled before being swept back into the emotional undertow generated by the media just yards from the front door.

The phones had rarely been still. During this morning alone, I'd taken calls of support from three key Republican senators: Rick Santorum of Pennsylvania, Jon Kyl of Arizona, and Mitch McConnell of Kentucky, all of them close friends. They all pledged to back whatever decision I made. But I knew the heavy flak they were getting from other members of Congress and, more important, from their own constituents.

There also were calls from other GOP senators, terrified that the spreading political brushfire might engulf the Senate as a whole. The reality was obvious: The political world, at that instant, was focused on my small and quiet office in Pascagoula.

I glanced at my watch. It was about eleven in the morning — a perfect time for the networks to break into their daytime broadcasts and suddenly switch to Pascagoula. It was my cue to hit the airwaves. With good connections and a lot of luck, my statement would lead the evening newscasts of the major networks and, I hoped, bring a prompt end to my immediate suffering. Then the highly rated news anchors would finish the job. It would be a pleasure to stab the ranking Republican with their barbed words.

Sometime earlier, after painful conferences with my son, Chet, my daughter, Tyler, and Tricia, I'd decided to give up the position of majority leader of the United States Senate.

The decision was far from unanimous. Chet was furious. He also was certain — from his own Washington contacts — that I could retain the votes I'd always had and remain majority leader. "Almost every Republican with any power knows that your toast to Thurmond at this birthday party contained not a drop of racism," he said. "Go out there and fight this." Chet, a businessman and entrepreneur, had inherited my addiction to action — my compulsion to take something on and win it. He'd seen me do it time and time again. And I understood his fury over my treatment, by the press and even by President George W. Bush.

Tyler, a mom who also worked at the Metro Jackson Chamber of Commerce, didn't burst into anger. "Just see this through," she said. "You're majority leader now, and you will be reaffirmed in January. You're Trent Lott. You'll be standing when this is over." A few days later, she made an impassioned public speech in defense of my actions, pointing out that she had never seen a single racist action on my part. "Nor have I heard him utter a racist word or slur. Everyone's getting this wrong."

Tricia, always a rock at my side, somberly promised to line up behind whatever decision I made. But later, after I quit, a close friend told me she had slipped off to another part of the house for a good cry.