Accessibility links
Who They Were NPR coverage of Who They Were: Inside the World Trade Center DNA Story: The Unprecedented Effort to Identify the Missing by Robert C. Shaler. News, author interviews, critics' picks and more.

Inside the World Trade Center DNA Story: The Unprecedented Effort to Identify the Missing

Title
Who They Were
Subtitle
Inside the World Trade Center DNA Story: The Unprecedented Effort to Identify the Missing
Author
Robert C. Shaler

Traces the harrowing story of the three-year DNA investigative effort to identify the victims of the World Trade Center attacks, describing the obstacles faced by the author and his forensic biology team to bring closure to thousands of bereaved families. 75,000 first printing.

NPR stories about Who They Were

September 8, 2005 • Robert Shaler, former director forensic biology at the New York City Office of the Chief Medical Examiner, led efforts to identify remains at the World Trade Center attacks. He discusses the challenges that lie ahead for those responsible for identifying the bodies of Hurricane Katrina's victims.

Excerpt: Who They Were 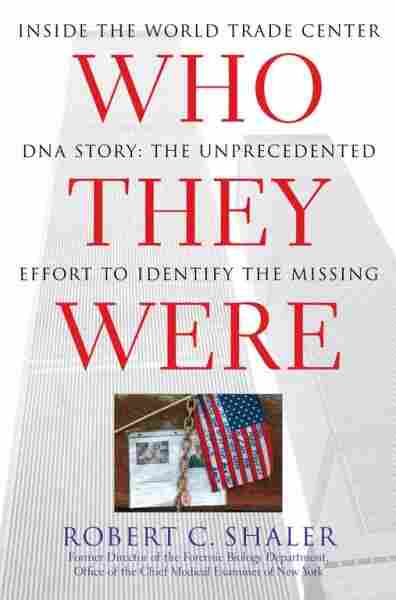 Inside the World Trade Center DNA Story: The Unprecedented Effort to Identify the Missing

New York City has been host to a number of the nation's historic mass-fatality events, some of which have led to new legislation or to sweeping social change. In 1904, the steamer the General Slocum was making its annual three-hour excursion from the pier at East Third Street to Long Island. At the Hell Gate, a turbulent and treacherous part of the East River, the steamer caught fire and sank, officially killing 1,021 and perhaps as many bodies were never recovered. David Von Drehle's Triangle: The Fire That Changed America tells the story of the Triangle Shirtwaist Company fire of 1911, which killed 146 people, 123 of whom were women. That tragedy was an eerie prophecy of the World Trade Center attacks on September 11, 2001, because many jumped to their deaths to avoid being burned.

The Triangle fire changed the sweatshop practices of unscrupulous employers, and the General Slocum disaster motivated federal and state regulators to improve the emergency equipment on passenger ships. After the World Trade Center attacks, we witnessed the formation of the Department of Homeland Security and our nation's formal declaration of war against terrorism.

This book, however, is not about social change or legislation or even the events of September 11 that changed the course of our nation and its attitude about terrorism. It's about people and identifying the victims of a mass-fatality event, specifically those who perished in the World Trade Center towers. It is not about the heroic work of the Armed Forces DNA Identification Laboratory, which identified those who died that day in the plane that crashed in Shanksville, Pennsylvania, or the one that slammed into the Pentagon. It's about allowing families to move on. Mostly, though, it is the story of unnamed men and women who toiled on behalf of those families.

Identifying bodies from mass fatalities in the early twentieth century involved much less precision than it does now. Identifying those lost on the General Slocum was a harrowing experience for relatives who searched through charred remains at the morgue to find their loved ones. Finding loved ones after the Triangle Shirtwaist Company fire was no less harsh. Families had to parade past burned and disfigured bodies lying in caskets and attempt to locate their loved ones based almost solely on recognizing familiar physical features, clothing, or jewelry. Today, identifying our loved ones is mostly a scientific endeavor, employing medicine, dentistry, and DNA. It is hoped that our modern practices render the experience less ghoulish from that which families endured in the past.

Traditionally, DNA has played a minor to moderate role in the process. In commercial airliner crashes, a manifest of the passengers exists, and the recovered bodies, though many are badly fragmented, are mostly intact. Dental records, fingerprints, and personal effects often suffice to make the majority of the identifications. Routine DNA testing, the kind that all American forensic DNA laboratories perform daily, is mostly used for reassociating fragments to the remains of someone already identified or for identifying remains when other methods fail.

The World Trade Center was different. Larger in scope and occurring in two towering public office buildings that also housed a mass-transit hub, the World Trade Center had no official manifest to tell us who or how many were missing. In fact, it took more than two years to obtain a working manifest. There may still be names missing from the list, because we know undocumented immigrants worked there as well.

The falling buildings fragmented everything in their wake, most especially the people. The recovery process was prolonged — nearly nine months — and the World Trade Center rubble burned at near or higher than cremation temperatures for three months, accelerating the decomposition of the remains and affecting the quality of the DNA. Possibly, too, many were entirely cremated and will never be identified. Dental and fingerprint records certainly could not suffice, thrusting DNA into a prominent role in identifying the missing. Sadly, we will never identify everyone who perished. Many were likely cremated from either being in close proximity to or in the rubble that burned for three months, or if they had been in the fireball when the planes exploded. As of April 2005, when the process was suspended, we had identified only 1,592 out of the presumed 2,749 who died.

When asked if I would share my personal account of the DNA effort to identify the missing in the aftermath of the World Trade Center disaster, my first impulse was to say no. My emotions had been intensely private, something I was not ready to share. On reflection, however, I realized that the DNA effort, though mentioned frequently in the print and broadcast media, remained mysterious to most. Telling a family that "DNA made the identification" grossly oversimplified the extent and complexity of the work.

I also realized that many of my staff as well as others at the Office of Chief Medical Examiner (OCME) had chosen to dedicate their lives to this work so that families who lost loved ones might find closure. Since this has been the largest and most scrutinized forensic investigation in United States history, I believe it is important to document for the historical record the heroic efforts of those who were an integral part of the DNA effort.

The purpose of this book is to show for the first time the behind-the-scenes activity of the World Trade Center DNA identification effort. Also, this account is about integrity and how New York City's OCME staff, under the guidance of Dr. Charles Hirsch, refused to hide its mistakes. While this book is about the people who made the World Trade Center identifications, it is also about science. I apologize if some of the text seems esoteric, but I believe it is important to include the science so that readers can understand the complexity of what we faced.

Throughout the World Trade Center DNA identification effort, the print and broadcast media credited me with having conceived, orchestrated, and directed the DNA effort. While that's mostly true, many contributed their expertise, thoughts, and time. These folks are absent from the official record. They deserve credit for their contributions, and I firmly believe Americans need to know who they are and the roles they played.

Still, this is my account of the DNA effort that began on September 11 and continued for more than three years, long after the rest of the working world had moved on. It records the facts as I remember them. If these disagree with others' accounts of the specific sequence of events, then I apologize for the failures of my memory.

What this book will not do is point a finger. It is not meant to be an expose. Not that there haven't been mistakes, errors in judgment, and personal conflicts. There have. What's important, though, is that given the chaos and the ensuing emotionally exhausting work, everyone associated with the DNA effort worked to the very best of their ability, most going well beyond what would reasonably be expected.

I suppose I was lucky. When Tuesday, September 11, 2001, dawned and most of the world witnessed the attacks on the World Trade Center, I naively underestimated the magnitude of the task facing me. I never stopped to consider how long the project would take, the effect it would have on my life and family, or especially the emotional toll it would exact.

Thankfully, there has been a silver lining: the families who lost their loved ones. These wonderful people bonded with me and my staff, made us feel wanted and important, consoled us, and showed us why our efforts were worthwhile. Too often, I'm afraid, we agonized over our work and worried about the effect it was having on these families, eschewing the emotional toll it was taking on us. We often cried at our computers and at weekly meetings with the families. Sometimes we high-fived after identifying someone or we'd steal away to an out-of-the-way corner to be alone or simply go for a walk to deal with our emotions. And we hugged.

By February 2005 we had taken the technology as far as it could go and announced that the work would end, for now, although it took until April before the entire staff had actually paused and a letter had been sent to the families. Officially, the OCME was pausing with the hope and expectation that future technology would allow others to reanalyze those remains that still held some DNA. Even before the announcement, I had decided that, when we finished this phase of the work, I would retire. After twenty-five years at the medical examiner's office, I doubted anything could be as important in my career as identifying those who died on September 11, 2001. The families and the community honored me, and for that, I am humbled and will be eternally grateful. Mostly, I want to thank my colleagues who stayed the course. Without them, hundreds of families would never have had their loved ones returned. They were the real heroes of the World Trade Center DNA work. And for them, I have the highest regard and admiration. They are simply the best, ever.