Stories Behind the Treasures at the Harvard Museum of Natural History

Title
The Rarest of the Rare
Subtitle
Stories Behind the Treasures at the Harvard Museum of Natural History
Author
Edward O. Wilson, Nancy Pick, et al

Shares the discovery stories of some of Harvard University's rarest natural history specimens, recounting the origins of such items as Nabokov's butterflies, George Washington's pheasants, a sand dollar collected by Darwin during his Beagle voyage, and the only stuffed bird remaining from the Lewis and Clark expedition. 25,000 first printing.

NPR stories about The Rarest of the Rare

August 10, 2005 • The back rooms at a Harvard University museum are filled with millions of items that will never be displayed. But curators just can't bring themselves to throw anything away.

Excerpt: The Rarest Of The Rare 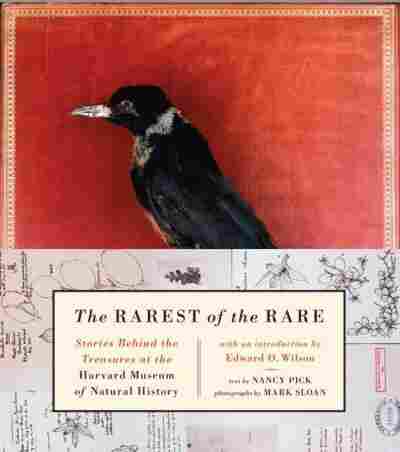 Stories Behind the Treasures at the Harvard Museum of Natural History

In nature's infinite book of secrecy,
A little I can read.
-- William Shakespeare

For anyone drawn to nature's infinite book, Harvard's natural history collections make excellent reading. The collections comprise some 21 million specimens — animal, vegetable, and mineral — from every imaginable part of the earth. Scientists devote lifetimes to their study, deciphering the secrets of species.

Most of Harvard's specimens reside in a sprawling redbrick Victorian edifice, five stories high and not without charm. Housed within is the Harvard Museum of Natural History, which presents the collections — and scientific research based on them — to the public. Permanent exhibitions include the famous Glass Flowers, thousands of animals from around the world, and a beautiful hall of minerals. And yet these galleries offer only a glimpse. For behind the scenes extends a complex of scientists' offices, research laboratories, and specimen storage areas. Past one door lies The Egg Room, with some thirty thousand glass-topped boxes containing birds' nests and eggs. Behind another door reside so many mollusk shells that no one has ever managed an exact count. One room yields the world's largest collection of ants; another holds hundreds of horns and tusks; still another reveals meteorites from the asteroid belt. The specimens — most dried, tanned, or pickled in alcohol — fill innumerable bottles, boxes, drawers, and cabinets. They are the world, distilled.

Scientists went to great lengths to obtain the specimens, often traveling to distant shores, amidst adventures and misadventures. The man who collected a rare tailed birdwing butterfly in Papua New Guinea was later eaten by cannibals. The botanist who discovered an exquisite Chinese lily nearly lost his leg, crushed in a rockslide in the remote mountains of Sichuan, the only place where the plant grew. The bones of a huge Kronosaurus, an ancient marine reptile, had to be dynamited out of Australian limestone by a man nicknamed The Maniac. Other specimens are notable for their collector's fame. Harvard has natural history artifacts from George Washington, Meriwether Lewis, John James Audubon, Henry David Thoreau, Charles Darwin, and Vladimir Nabokov, to name but a few.

Further, Harvard's collections are important for their history. The college was founded back in 1636 by members of the Massachusetts Bay Colony, just sixteen years after the Pilgrims landed at Plymouth. Aiming to turn out well-educated ministers, Harvard taught astronomy almost from the start — fostering discussions of comets, the Copernican system, and discoveries made through early telescopes.2 Physics came next. After the medical school opened in 1782, the curriculum expanded to include chemistry, mineralogy, and biology. When the great naturalist Louis Agassiz joined the Harvard faculty in 1848, he galvanized the entire country with his vision of an American-based science to rival that of Europe.

Meanwhile, the race was on to discover, describe, and name new species. As intrepid travelers sent back finds from the far reaches of the globe, Harvard's natural history collections grew rich in type specimens — those specimens chosen to represent new species. (Type specimens are considered so important that the British, during World War II, hid theirs in caves.) As Harvard's collections grew, so did the need for better storage and display. During the mid-nineteenth century, scientists shaped what had once been "cabinets" into formal research museums: the Botanical Museum (1858), the Museum of Comparative Zoology (1859), and the Mineralogical Museum (1891).

Gradually, evolutionary science was coming to the forefront. By 1900, Charles Darwin's theory had won wide acceptance by scientists, but many questions about the mechanisms of evolution remained. In the 1940s, Ernst Mayr helped to crack one of Darwin's major unsolved puzzles: How do species originate?3 During his years at Harvard, Mayr, who became one of the world's leading evolutionary biologists, promoted the usefulness of museum specimens in revealing the process of evolution.

Then came the 1950s, and the discovery of DNA's double helix. The study of museum specimens and “whole organisms” fell out of favor. Molecular biology — genetics — took center stage. The new vanguard dismissed naturalists as stamp collectors and natural history museums as old-fashioned and outmoded. Unexpectedly, with the 1980s came a dramatic turnabout. Led in part by Harvard's Edward O. Wilson, cutting-edge scientists once again began taking interest in the lives of plants and animals. Since that time, natural history museums have become key centers of biodiversity and ecology studies, with biologists searching for ways to slow the current great wave of extinction.

This chapter lays out some highlights of natural history collecting and research at Harvard, over its long history.

Curiosities and Other Early Collections

The philosophical apparatus. Astronomy came first, becoming part of Harvard's curriculum as early as 1640. Graduating ministers, it was thought, needed to be able to interpret comets and other heavenly phenomena for their commu-nities.4 In 1672, the college received what was likely its first scientific instrument: an English telescope, three and a half feet long, given by Connecticut colonial governor John Winthrop.

The sciences, at that time, were called natural philosophy. It followed, then, that scientific instruments were known as "the philosophical apparatus." Harvard's apparatus collection grew slowly until 1727, when Thomas Hollis, a wealthy and generous Englishman, donated five chests filled with equipment. Included were instruments for studying mechanics, hydrostatics, pneumatics, and optics.

Hollis also gave money for a professorship in "Mathematicks and Experimental Philosophy," the oldest endowed science professorship in the New World. In 1739, John Winthrop — descendant of the governor — became Hollis professor and Harvard's first important scientist. He ran the colony's first experimental physics laboratory, lecturing on electricity and Newton's laws. Following the terrible Lisbon earthquake of 1755, Winthrop gave two talks on seismology. By explaining earthquakes as natural phenomena, rather than manifestations of divine wrath, he drew the disapproval of more than a few members of the clergy.

The philosophical apparatus, kept in Harvard Hall, continued to grow. The college received an orrery, an instrument that, when turned by a crank, revealed the daily and annual motions of sun, moon, and Earth. In 1748, Francis Archibald donated a human skeleton. In 1758, Massachusetts statesman James Bowdoin gave a valuable microscope. In 1761, science professor John Winthrop set off on an important expedition to Newfoundland, to observe the transit of Venus across the sun. Harvard supplied him with state-of-the-art equipment: an octant, an excellent pendulum clock, and two telescopes — refracting and reflecting. Despite the annoying swarms of insects, Winthrop and his two assistants managed to obtain good measurements.Continues...