by Douglas Brinkley and Ronald Reagan

Relates the D-Day activities of the elite U.S. Army 2nd Rangers, recounting how they defended themselves for two days against Nazi counterattacks, and describes President Reagan's fortieth-anniversary speech that commended their achievements.

NPR stories about The Boys Of Pointe Du Hoc

June 6, 2005 • Sixty-one years ago, U.S. Rangers stormed the cliffs at Pointe du Hoc to break through Nazi lines. Historian Douglas Brinkley talks about this historical event and the rise of the 'New Patriotism.' 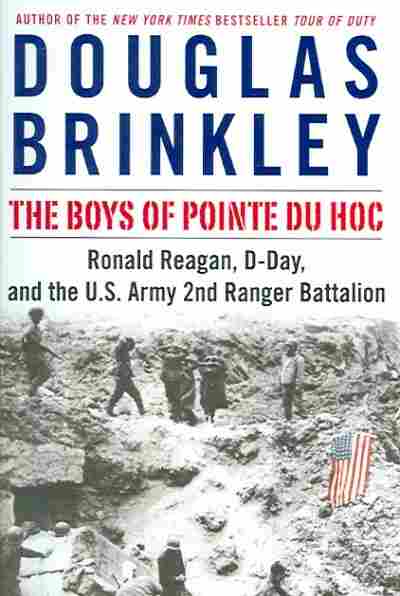 The Boys of Pointe du Hoc

As a movie actor, history buff, and unabashed nationalist, President Ronald Reagan, while he prepared for the fortieth anniversary of D-Day, was keenly aware of the sheer power the word "ranger" conjured in the American imagination, even if his facts about their early combat antics were - as historian Garry Wills claims - often of the Disneyland triumphalist variety. Ever since Jamestown was established by English settlers in 1607, "rainger" or "ranger" had become part of the New World vocabulary. Feeling vulnerable to attack by Native Americans, early colonists dispatched armed scouts to roam the wilderness and, if necessary, exterminate potential enemies before any Indians could wreak havoc on their Christian communities. The daily reports of these scouts often said something like "ranged twenty miles yesterday" or "too rainy to range far," so it didn't take long for the term "ranger" to stick. They were, in effect, wilderness patrolmen. They realized early on that European-style warfare was unsuitable to America's roiled terrain. Rangers, adjusting to topography, adopted the stealth tactics and nomadic ways of the various Indian tribes who freely roamed the eastern seaboard, and they aroused the hostility of the Native Americans inhabiting it. Such combat was almost the antithesis of European warfare, which at the time consisted of much maneuvering and very little fighting. "In the last decades of the seventeenth century rangers acting as quasimilitary units first appeared in Massachusetts and Virginia," historian Jerome Haggerty noted. "At that time combat in North America was influenced by the wilderness."

As soon as the French and Indian War (1756-1763) broke out, a Natty Bumppo-like New Hampshire backwoodsman named Robert Rogers, livid that Native American warriors constantly ambushed local forts and homesteads in hit-andrun raids, sought revenge. He signed up with the British Army to be a scout. Before long he received a commission as captain and organized a "ranger" team of a few dozen men trained for hand-to-hand combat against both the French and Indians. Officially they were the Ranger Company of the New Hampshire Provincial Regiment; a year later they had become His Majesty's Independent Company of American Rangers. Clad in distinctive green outfits, they eventually became known as Rogers' Rangers and soon attacked French fortifications along Lake Champlain and Lake George. Accordingly, Rogers was dubbed Wabi Madaondo, or white devil, by the Indians who crossed his path. He, in turn, said that Native Americans had "revengeful" dispositions in his 1765 book, A Concise Account of North America. "Throughout the French and Indian War, Rogers, and his Rangers, continued to wage unconventional warfare throughout the upper New York, lower Canadian, and even French West Indies regions," historian J. D. Lock wrote. "Following the war, there were periodical 'revivals' of Rogers' Rangers in support of British Operations until 1763 when they were 'paid off' for the first time."

The very notion of these rangers - often with smeared war paint on their faces and waving sharp knives - caused unmitigated fear among the various Native American tribes (particularly the Abenaki St. Francis Indians) warring against the British empire. Teaching his mobile recruits how to live off the land, Rogers often took advantage of subzero winter weather to catch his slumbering enemies off guard. By using specially made snowshoes, Rogers' Rangers could cross frozen rivers and lakes with bold ease, startling their unexpecting adversaries. Unusual for military men of the colonial era, these hardened rangers sought to unnerve their opponents by engaging in everything from blood-curdling yells to midnight attacks. Lightning-fast raids were their specialty. Decimating the enemy was all that mattered. Almost intuitively, Rogers' Rangers understood what, according to historian Robert W. Black, would become the modern-day mantra for the U.S. Army Rangers: "It is all in the heart and the mind."

During the American Revolution, Rogers volunteered to serve George Washington; the general refused his help, fearful he was a loyalist spy. Snubbed, Rogers abandoned the call for independence and instead organized a battalion of pro-British loyalist commandos known best as the Queen's Rangers. If Washington didn't trust him he would remain loyal to King George III. Back in Virginia, however, a new volunteer outfit, clad in coonskin caps and equipped with long rifles and hunting knives, took the fight to the Redcoats. Led by Captain Daniel Morgan, this ranger battalion did whatever chore was needed, from toggling across the swift currents of New York rivers to doing surveillance scouting in the pristine Virginia countryside. A great motivator of men, Morgan used a recruitment test that became legendary among Washington's Continental Army. He printed up numerous broadside illustrations of King George's robust head. To join his rangers you had to be able to shoot the British monarch in the face from 100 yards away, usually on the first try. Because of this hateful recruitment practice, Morgan was deemed a "war criminal" in London.