A man looks back at growing up in the post-World War II suburbs of Washington, D.C., in a family dominated by his much loved mother after the death of his father when he is eleven years old and his struggle to escape the complex relationships of family to build a life of his own. A first novel. 20,000 first printing.

NPR stories about Mother Of Sorrows

Richard McCann's Elegy to a 'Mother of Sorrows'

July 24, 2005 • Richard McCann's autobiographical novel Mother of Sorrows took 20 years to complete. The author tells Jacki Lyden how the book came to be.

Richard McCann's Elegy to a 'Mother of Sorrows' 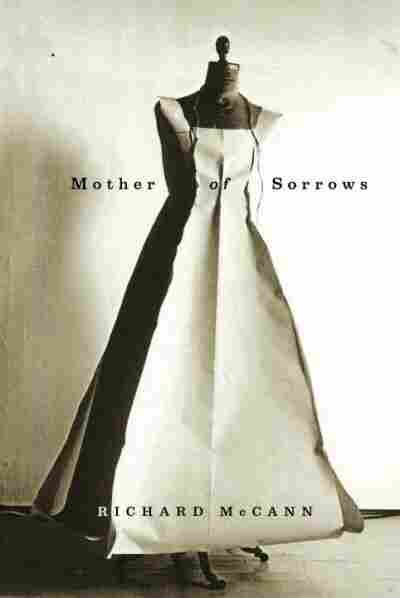 Each night, after dinner, my father went downstairs to his workbench to build birdhouses, which he fashioned from scraps of wood left over from pine-paneling our basement. He was a connoisseur of birdhouses, my mother said. His favorite was a miniature replica of our ranch house, with a tiny Plexiglas picture window, a red Dutch door, and a shingled roof. It was a labor of love, he said the night he completed it.

My brother, Davis, went to his room, where he listened to Radio Moscow on his shortwave. As for me: I cleared the table.

“Sit with me, son,” my mother said. “Let’s pretend we’re sitting this dance out.”

She told me I was her best friend. She said I had the heart to understand her. She was forty-six. I was nine.

She sat at the table as if she were waiting to be photographed, holding her cigarette aloft. “Have I told you the story of my teapot?” she asked, lifting a Limoges pot from the table. She had been given the teapot by her mother, whom we called Dear—Dear One, Dear Me, Dearest of Us All. Dear had just recently entered a sanatorium for depression, after having given away some of her most cherished possessions. When she died at home a few months later—she’d returned to her deteriorated Brooklyn brownstone, where she slept on a roll-away bed in the basement—my mother found she’d left an unwitnessed will written entirely in rhymed couplets: “I spent as I went / Seeking love and content,” it began.

“No,” I told my mother as I examined the teapot’s gold-rimmed lid, “you haven’t told me about it.”

In fact, by then my mother had already told me about almost everything. But I wanted to hear everything again. What else in Carroll Knolls—our sunstruck subdivision of identical brick houses—could possibly have competed with the stories my mother would summon from her china or her incomplete sterling tea service or the violet Louis Sherry candy box where she kept her dried corsages? I wanted to live within the lull of her voice, soft and regretful, as she resuscitated the long-ago nights of her girlhood, those nights she waited for her parents to come home in taxicabs from parties, those nights they still lived in the largest house on Carroll Street, those nights before her parents’ divorce, before her father started his drinking.

Night after night she told me her stories.

Night after night I watched her smoke her endless Parliaments, stubbing out the lipstick-stained butts in a crystal ashtray. We sat at the half-cleared table like two deposed aristocrats for whom any word might serve as the switch of a minuterie that briefly lights a long corridor of memory—so long, in fact, the switch must be pressed repeatedly before they arrive at the door to their room.

She said her mother had once danced with the Prince of Wales.

She said her father had shaken hands with FDR and Al Capone.

She said she herself had once looked exactly like Merle Oberon.

To prove it, she showed me photos of herself taken during her first marriage, when she was barely twenty. From every photo she’d torn her ex-husband’s image, so that in most of them she was standing next to a jagged edge, and in some of them a part of her body—where he’d had his hand on her arm, perhaps—was torn away also.

She said life was fifty-fifty with happiness and heartache.

She said that when she was a girl she’d kept a diary in which she’d recorded the plots of her favorite movies.

She said that if I was lucky I too would inherit the gift of gab.

When I was little, she read me Goodnight, Moon. Goodnight, nobody. Goodnight, mush. And goodnight to the old lady whispering “hush.”

But otherwise, she read me no bedtime books. She told me no fairy tales.

Things she told me, sitting on the edge of my bed at night:

“I was born with a caul. That means I have a sixth sense.”

Or, touching her perfumed wrist to my cheek: “This is called ‘Shalimar.’ ”

Or, faintly humming: “Do you know this tune? Do you know ‘When I Grow Too Old to Dream, I’ll Have You to Remember’?”

Or sometimes when she coughed—her “nervous cough,” her “smoker’s cough”—she said, “One day, after I’m gone, you’ll hear a woman cough like this, and you’ll think she is me.”

my mother’s clothes: the school of beauty and shame

Like every corner house in Carroll Knolls, the corner house on our block was turned backward on its lot, a quirk introduced by the developer of the subdivision, who, having run short of money, sought variety without additional expense. The turned-around houses, as we kids called them, were not popular, perhaps because they seemed too public, their casement bedroom windows cranking open onto sunstruck asphalt streets. In actuality, it was the rest of the houses that were public, their picture windows offering dioramic glimpses of early-American sofas and Mediterranean-style pole lamps with mottled globes hanging like iridescent melons from wrought-iron chains. In order not to be seen walking across the living room to the kitchen in our pajamas, we had to close the Venetian blinds. The corner house on our block was secretive, as though it had turned its back on all of us, whether in superiority or shame, refusing to acknowledge even its own unkempt yard of yellowing zoysia grass. After its initial occupants moved away, the corner house remained vacant for months.

The spring I was in sixth grade, it was sold. When I came down the block from school, I saw a moving van parked at its curb. “Careful with that!” a woman was shouting at a mover as he unloaded a tiered end table from the truck. He stared at her in silence. The veneer had already been splintered from the table’s edge, as though someone had nervously picked at it while watching TV. Then another mover walked from the truck carrying a child’s bicycle, a wire basket bolted over its thick rear tires, brightly colored plastic streamers dangling from its handlebars.

The woman looked at me. “What have you got there? In your hand.”

I was holding a scallop shell spray-painted gold, with imitation pearls along its edges. Mrs. Eidus, the art teacher who visited our class each Friday, had shown me how to make it.

“It’s real pretty.” She glanced up the street as though trying to guess which house I belonged to. “I’m Mrs. Tyree,” she said, “and I’ve got a boy about your age. His daddy’s bringing him tonight, in the new Plymouth. I bet you haven’t sat in a new Plymouth.”