The Good, The Bad, And Me

The Good, The Bad, And Me

Title
The Good, The Bad, And Me
Subtitle
In My Anecdotage
Author
Eli Wallach

The author recounts his early years in Brooklyn, struggles to become an actor, work with such stars as Marlon Brando and Marilyn Monroe, and role as one of the earliest members of the famed Actors Studio.

NPR stories about The Good, The Bad, And Me

May 20, 2005 • His memoir is The Good, the Bad, and Me. Wallach's long career on stage and screen, included spaghetti westerns of the '60s and the Godfather trilogy. He won a Tony for his role in Tennessee Williams' Rose Tattoo. (This interview was initially broadcast on Nov. 13, 1990.)

Excerpt: The Good, The Bad, And Me 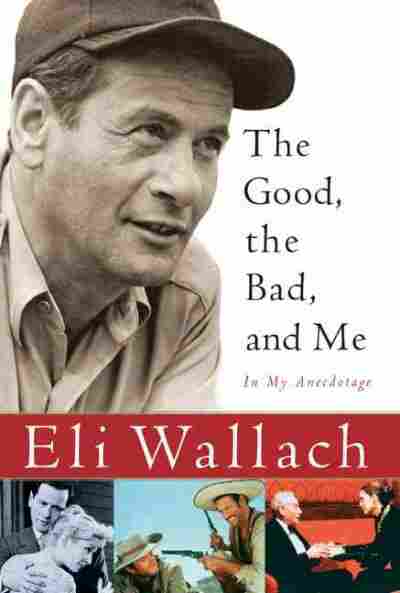 An Actor Grows in Brooklyn

UNION STREET was a wide main artery running from Prospect Park past Park Slope down to the docks of the East River. Number 166 housed Bertha's, a small toy, candy, and stationery store named for my mother. A long glass counter ran the length of the store. There was an icebox for soda pop and a pay telephone. On the back wall of the store were shelves, which held toys, big jars of Indian nuts, and cigarettes. The store was always busy in the late afternoons, when longshoremen would drop in after a day of unloading ships' cargo. Over their shoulders, many of them would carry big crooked iron hooks, which seemed to be part of their uniform. They'd drink sodas, make phone calls, buy cigarettes, eat the tiny Indian nuts, then spit the shells all over the floor.

I lived in the rear of the store with my parents, Abe and Bertha, my older brother and sister, Sam and Sylvia, and my younger sister, Shirley. Mom and Pop had a bedroom with a big window that looked out onto the alley. Sam had his own bed, and there was a cot for me next to it. Sylvia and Shirley shared the last bedroom. There was one toilet for the six of us. Sam called it the throne room. We all soon learned how to take care of our needs there-no reading, no wasting time, just do your duty, flush, and get out.

My baby sister, Shirley, and I used to argue a lot. Sometimes I'd steal her milk bottle. And at dinner we would fight over the wishbone. We'd each hold one end and pull it apart, and the winner would get to make a wish. Even in my earliest memories, my wish was always the same: I wanted to be an actor.

I was born in Brooklyn on December 7, 1915, back when the streets were still lit by gas lamps. As soon as it began to get dark, the lamplighter would appear. A little man with a thick black mustache, he carried a long stick with a flint on the end of it. He'd push the stick into an opening of a glass bowl at the top of a lamppost, and a blue-green flame would light up the gas and throw big circles of light down on the street. Right in front of our store, a streetcar ran down the center of Union Street powered by an electric wire overhead.

My father, Abe, had been a tailor in southeast Poland and had met my mother, Bertha, in their small town of Przemy´sl. He had come to America in 1909 and opened the store with the financial backing of his brother Michael, a wealthy furrier who lived in Bensonhurst. Then Abe sent for my mother and my brother Sam. Sometimes Abe would tell us stories about growing up in Poland-Cossacks riding into his village, robbing stores, and killing Jews. He was a wonderful storyteller, but he also had a volatile temper and suffered from severe headaches. Often I remember him holding a hot glass of tea next to his throbbing temple. One night Sam and Sylvia were arguing as I lay between them on the sofa bed. "Quiet," Pop yelled. "Quiet or I'll throw the glass!" That yell from my pop just seemed to add fuel to their arguments. They argued even more fiercely, and Pop threw the glass like a fastball pitcher. Sam yelled, "Look out." I did-and I got hit. My pop was very upset. "Get him to the doctor," he ordered. Sylvia walked me to the hospital, crying. "I will not walk on the same street with you if you cry," I told her.

"I'll stop," she said, taking me by the hand, as we went to the hospital. I received three stitches over my left eye. When we returned to the store, my pop handed me a three-scoop ice-cream cone-one scoop for each stitch, I guess.

We were the only Jewish family in our working-class neighborhood, which was predominantly Italian, and my earliest childhood memories are filled with vivid images of Union Street. Sometimes an organ grinder would appear on the street with a live parrot perched on his shoulder. "Fortune! Fortune! I'll tell you a fortune," the fortune-teller would call out, and customers would gather around him.

"Come on, let my parrot pick a card for you," the fortune-teller would say, and if you paid a nickel, the parrot, after a nod from his owner, would bend down and come up with a card sticking out of his beak: "There's your fortune! Read, read! All of it is true!"

Sometimes a photographer would set up his tripod just outside of our store. Under his camera, there would be a tin can filled with developing fluid.

"Ten cents," he would say. "You sit on my pony, I take-a your picture and develop it right here." I always watched him, and one day I got up the courage to have my picture taken. I gave him a dime, mounted the pony, and pretended to be a cowboy riding out to round up cattle or joining a posse chasing bandits.

At one time or another, everyone in our family worked in the store. Sometimes Pop would go across the river to New York's Lower East Side to buy supplies, and Mom would take care of customers. My tasks included emptying the water out of the basin underneath the iceboxes, taking out the garbage, sweeping up the shells from the Indian nuts, and walking my little four-wheeled wagon to the newspaper dealer on Harrison Street and piling it up with Sunday papers for the store.

Early in the mornings, I'd stand in front of our store and watch the white-jacketed milkman. He'd hop off his wagon, leaving the reins draped off the horse's back, and stop at each doorway. He'd drop off the milk, and his horse would walk slowly down the street, timing its stops exactly with the milkman returning to reload his tray. The milk came in bottles, and at the top of the bottle, there was always heavy cream. Another one of my jobs was to shake those bottles and put them in the iceboxes in our kitchen and in the store.

Twice a day, the fruit wagon would stop near our store. The wagon had elegantly painted side panels depicting churches, mountains, and trees. A big scale with large white numbers dangled from the rear of the wagon. The horse's ears would stick out through the holes in his straw hat. The fruit man would stand up and ring a big bell, crying out, "Fruit! Fresh fruit! Melons, bananas, oranges, apples!" Mom would always send Sylvia out to buy a bag of fresh fruit that she would then put out on the sideboard in our kitchen.

Horses were everywhere in those days, hauling fruit, milk, and ice. And they often left their calling card on the street-big clumps of horse shit. On cold days, steam would rise from the pile. Three times a day, the street cleaner would arrive in a white hat and jacket, pushing a big two-wheeled ash can. He'd deposit the manure and move on. The manure would be sold later as fertilizer.

Mr. Dante the wine-maker had a shop near our store. One day he hired me to help him slide crates of grapes down a board into the cellar, where he would catch them.

"Come down and watch," Mr. Dante said to me.

We emptied the grapes into a large round vat that stood on a wooden frame about three feet from the ground. Two overweight ladies who looked like they had mustaches stood waiting, with their skirts rolled up above their knees. Dante turned on his phonograph, and the women began stomping the grapes to the rhythm of a tarantella. The juice flowed from the holes in the bottom of the vat into big bottles.

"Here's a bottle from last year's pressing," he said. "My regards to your pop." He also gave me a whole new shiny quarter. On the way home, I wondered if I should tell Pop about those ladies; I wasn't sure if they had washed their feet.

A few blocks away from our store, there was a theater called La Luna, where I saw my first stage production when Pop took Sam, Sylvia, Shirley, and me to see an Italian puppet show. The walls of La Luna were covered with giant canvas paintings of fearless warriors on horseback, driving spears into the necks of animals. The canvases seemed to drip blood. The puppets in the show were life-size; their big glass eyes moved as they looked out on us and yelled in Italian. I was frightened by the show, and that night I couldn't fall asleep because I was afraid the puppets would get me-their eyes kept staring at me.

Even more exciting than the puppet shows were the Italian fiestas held on Union Street honoring the lives and accomplishments of saints. Pushcarts would suddenly line both sides of the street. Each cart contained delicacies-candy, plates of food. One time there was a man in a black apron with a big knife opening clams and oysters. Then we'd hear the band playing the Italian national anthem, and up the street would come floats and big, brawny longshoremen bearing huge statues of Jesus and Mary and other saints. Jesus would have his arms stretched out on a cross, a crown with thorns around his head, bloody tears trickling down his face. Mary would be wearing a colorful blue, green, and red dress-she looked a little like my mother.