NPR stories about Five Children and It

Excerpt: 'Five Children and It'

May 30, 2005 • A group of children dig up an old, short-tempered sand fairy who awards them a wish for the day in this summer pick from librarian Nancy Pearl.

Excerpt: Five Children And It 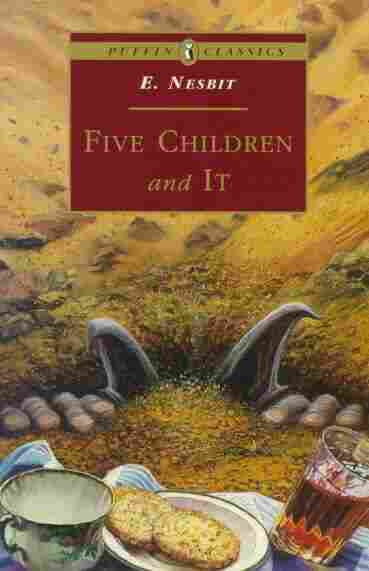 The house was three miles from the station, but, before the dusty hired fly had rattled along for five minutes, the children began to put their heads out of the carriage window and to say, "Aren’t we nearly there?" And every time they passed a house, which was not very often, they all said, "Oh, is this it?" But it never was, till they reached the very top of the hill, just past the chalk quarry and before you come to the gravel pit. And then there was a white house with a green garden and an orchard beyond, and mother said, "Here we are!""How white the house is," said Robert.

"And look at the roses," said Anthea.

"And the plums," said Jane.

"It is rather decent," Cyril admitted.

The Baby said, "Wanty go walky"; and the fly stopped with a last rattle and jolt.

Everyone got its legs kicked or its feet trodden on in the scramble to get out of the carriage that very minute, but no one seemed to mind. Mother, curiously enough, was in no hurry to get out; and even when she had come down slowly and by the step, and with no jump at all, she seemed to wish to see the boxes carried in, and even to pay the driver, instead of joining in that first glorious rush round the garden and the orchard and the thorny, thistly, briery, brambly wilderness beyond the broken gate and the dry fountain at the side of the house. But the children were wiser, for once. It was not really a pretty house at all; it was quite ordinary, and mother thought it was rather inconvenient, and was quite annoyed at there being no shelves, to speak of, and hardly a cupboard in the place. Father used to say that the ironwork on the roof and coping was like an architect's nightmare. But the house was deep in the country, with no other house in sight, and the children had been in London for two years, without so much as once going to the seaside even for a day by an excursion train, and so the White House seemed to them a sort of Fairy Palace set down in an Earthly Paradise. For London is like prison for children, especially if their relations are not rich.Of course there are the shops and theatres, and Maskelyne and Cook's, and things, but if your people are rather poor you don't get taken to the theatres, and you can't buy things out of the shops; and London has none of those nice things that children may play with without hurting the things or themselves — such as trees and sand and woods and waters. And nearly everything in London is the wrong sort of shape — all straight lines and flat streets, instead of being all sorts of odd shapes, like things are in the country. Trees are all different, as you know, and I am sure some tiresome person must have told you that there are no two blades of grass exactly alike. But in streets, where the blades of grass don't grow, everything is like everything else. This is why many children who live in towns are so extremely naughty. They do not know what is the matter with them, and no more do their fathers and mothers, aunts, uncles, cousins, tutors, governesses, and nurses; but I know. And so do you, now. Children in the country are naughty sometimes, too, but that is for quite different reasons.

The children had explored the gardens and the outhouses thoroughly before they were caught and cleaned for tea, and they saw quite well that they were certain to be happy at the White House. They thought so from the first moment, but when they had found the back of the house covered with jasmine, all in white flower, and smelling like a bottle of the most expensive scent that is ever given for a birthday present; and when they had seen the lawn, all green and smooth, and quite different from the brown grass in the gardens at Camden Town; and when they had found the stable with a loft over it and some old hay still left, they were almost certain; and when Robert had found the broken swing and tumbled out of it and got a lump on his head the size of an egg, and Cyril had nipped his finger in the door of a hutch that seemed made to keep rabbits in, if you ever had any, they had no longer any doubts whatever.

The best part of it all was that there were no rules about not going to places and not doing things. In London almost everything is labeled "You mustn't touch," and though the label is invisible it's just as bad, because you know it's there, or if you don't you jolly soon get told.

The White House was on the edge of a hill, with a wood behind it — and the chalk quarry on one side and the gravel pit on the other. Down at the bottom of the hill was a level plain with queer-shaped white buildings where people burnt lime, and a big red brewery and other houses; and when the big chimneys were smoking and the sun was setting, the valley looked as if it was filled with golden mist, and the limekilns and oast houses glimmered and glittered till they were like an enchanted city out of the Arabian Nights.

Now that I have begun to tell you about the place, I feel that I could go on and make this into a most interesting story about all the ordinary things that the children did — just the kind of things you do yourself, you know — and you would believe every word of it; and when I told about the children's being tiresome, as you are sometimes, your aunts would perhaps write in the margin of the story with a pencil, "How true!" or "How like life!" and you would see it and very likely be annoyed.