A dual-sided history of the Revolutionary War examines the conflict from both the colonial and British sides.

The Fourth of July

July 3, 2005 • Stanley Weintraub discusses Iron Tears, his recently published history of the American Revolution from the British perspective. King George III and Britons in the 1770s felt the colonists were complaining too much about too little... especially the taxation question. 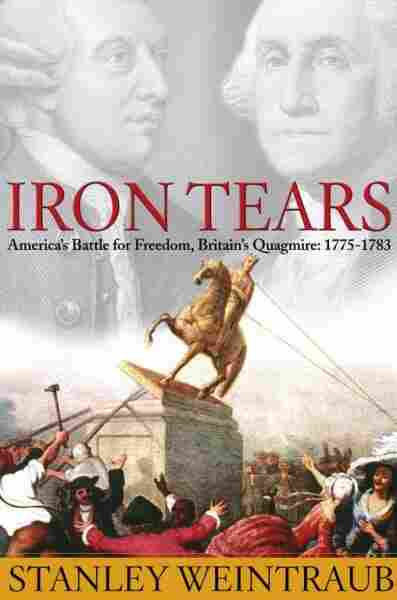 There has been built in the port of Chatham [in Kent] a ship of war of 74 guns, called the Atlas. The figurehead represents that gigantic fabulous personage with an enormous globe on his shoulders. The head carver having taking his measures badly, the globe was so high as to be in the way of the bowsprit, and it became necessary to take off part of the upper hemisphere. The part taken off was precisely North America.

— The Hague Gazette, September 13, 1782, in a translation from the Dutch reprinted in a London newspaper

On a summer morning in 1782 the energetic, fortyish Benjamin West, an expatriate Philadelphian and official history painter to George III, visited what was then Buckingham House to call upon Queen Charlotte. Expecting West, Charlotte asked him into her private sitting room, where he also found the king.

Realizing that the ongoing peace negotiations with the former colonies in America would lead to formal independence, the king asked West what he thought General Washington would now do. The godlike Washington, whom many Americans expected would be king if he wanted a throne, was more likely, West predicted, to return to his farm in Virginia.

If Washington did that, exclaimed His Majesty, who could not believe that anyone willingly relinquished supreme authority, he would be the greatest man in the world.

While General Washington still commanded the dwindling Continental army, and by strength of personality held the fractious colonies together, he had no authority over the peacemaking process three thousand miles away in Paris. Congress's appointees dealt with that, and West's immediate ambition was to paint the peace commissioners on both sides who were negotiating a draft of the peace treaty, a group portrait to be the first painting in a projected series on the long American war.

One of the most memorable paintings in American history, it achieves its dramatic resonance in part because a third of the canvas remains empty. Few great pictures better illustrate a wry later observation that "victory has a hundred fathers, but defeat is an orphan."

The seven persons West intended to represent as working on the preliminary treaty included Benjamin Franklin, John Adams, John Jay, Henry Laurens, and William Temple Franklin, the sage's grandson and secretary to the commission appointed by Congress. The British had great difficulty naming appointees willing to negotiate openly for the losing side while being directed by bureaucrats in Whitehall who did not want to be associated with the national embarrassment. Only a single royal commissioner, Richard Oswald, a wealthy former army contractor and slave trader with American connections, who had the courage to put up the fifty thousand pounds to bail Henry Laurens, a former president of the Congress, out of the Tower of London after he was seized at sea en route to Holland, proved willing to serve. With his secretary, Caleb Whitefoord, a writer and wit who had been a neighbor of Franklin's in London, Oswald was to be remembered by history on West's canvas.

The Americans duly posed for West — all but Franklin, who at seventy-seven was too frail for the turbulent Channel crossing from Paris. With the good offices of Whitefoord he arranged to lend a portrait and a bust in his stead. Since Oswald was unwilling to pose in the ignominy of defeat and risk the ruin of his reputation (legend had it that he also felt too ugly to show his face), Whitefoord, his subordinate and the seventh intended subject, could hardly offer to sit himself. Then Oswald died suddenly in November 1784 on his estate in Scotland. The scene could no longer be completed from life.

West abandoned the canvas — and any plans to do other episodes for his abortive series. The indelicate venture might in any case have cost him his prestigious standing at court and his market in England for other pictures. The five abandoned Americans loom quietly over the partly open scroll of the draft treaty, while the blank third is dramatically unfinished, orphaned by defeat.

Some ghostly suggestions for carrying the picture further emerge on close examination — a building and a grid for a more extended structure that could be the new Somerset House on the Thames, or merely a symbolic evocation of London. A hint of another treaty scroll, held by Oswald, also surfaces faintly. (Each side needed to archive its own authentic, signed copy — thus, a likely duplicate.) John Jay's shoes remain unfinished; John Adams's breeches lack texture and his chair's legs are incomplete; and Henry Laurens's coat has an unfinished swath across his chest. Young Franklin's coat is only partially painted.

At the bicentennial of the 1783 Treaty of Paris ending the war the United States Post Office issued a twenty-cent stamp ostensibly reproducing West's painting, as if referring to the definitive event. A travesty of history and a mischievous misuse of West's canvas, it cut Jay and Laurens out and moved Adams, and in imagining how the gap which West had left would be filled, the anonymous postal artist inserted an unidentifiable Englishman in Laurens's place and a second colleague at his right. A large sheet of paper substitutes for the treaty scrolls. The grid of characteristic English buildings in the background is replaced by buildings and steeples that could be as much West's own Philadelphia as any venue in England.

History painting has often reimagined history, but the curious postal image, presumably issued with the imprimatur of the United States of America, then thirty-seven states beyond the original thirteen, is unique in its expunging and invention. With Benjamin West long dead there was no estate to bring suit for falsification and enjoin release of the stamp.

In the historical reality beyond commemorative postage Edmund Burke, MP for Bristol and an outspoken critic of colonial policy, had talked of "iron tears" being shed as America slipped away from imperial grasp. "Iron tears" suggests musket shot and cannonballs when fired as much in sadness as in anger. Was the inevitable separation worth a war? Frederick, Prince of Wales, who died before he could succeed his father, irascible old George II, had left "Instructions for my son George [III]" in which he had exhorted, "If you can be without war, let not your ambition draw you into it....At the same time, never give up your honour nor that of the nation."

Was it honorable, if mistaken, to attempt to subdue rebels who no longer wanted to be the king's subjects? Could the exasperating and expensive long-distance conflict that West's painting recalled have possibly been won? How did relinquishing America look from the remote European side of the Atlantic? Were the admirals and the generals involved enthusiastically in the king's service, or only supplicants at, or beneficiaries of, his traditional reward system? How did the country gentlemen who held the decisive seats in the king's pliant House of Commons respond to the seemingly irrelevant war, which had become a quagmire? How did the divisive conflict appear to the prosperous London brokers, bankers, and traders who benefitted from the American trade?

Further, how did the Cabinet of the unhappy and flaccid Lord North, and his unpopular but forceful Secretary for America, Lord George Germain, a saturnine former general cashiered for alleged cowardice in an earlier war, cope with the increasingly distressing events, and — for better and for worse — help to shape them? Did they see the self-styled Americans as suffused with patriot zeal — or, with colonial irresponsibility, eager to escape their reasonable, even bargain-rate, burden of taxation? Or were there other reasons? The colorful and tumultuous background of that vacant third of Benjamin West's haunting canvas emerges in Iron Tears, in which the British empire loses its first jewel in the crown, America.