Short stories, anecdotes, cartoons, and columns are compiled in this amusing collection by male authors, such as Stephen King and Gordon Korman, who share their comical, sad, and strange memories of what life was like for them when they were boys and the impact those moments had in their later lives. Simultaneous. 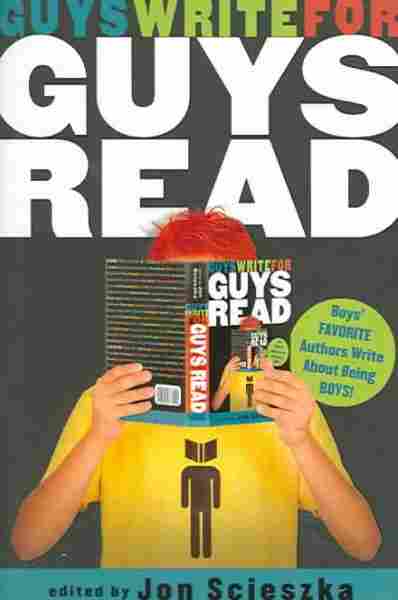 Hey guys-now here is something for you to read. A bunch of pieces by a bunch of guys ... all about being a guy. Some are memories. Some are stories. Some are just pieces of art these guys drew when they were your age.

That's exactly what this collection is not. It is not required reading. It's reading to find what you like. And I know you are going to find something in here, because these things are funny, action-packed, sad, goofy, gross, touching, stupid, true, and all very short.

Thanks to all of the guys who donated their thoughts about being a guy to this anthology. All the money from this work goes to support my nonprofit literacy program called Guys Read.

And it built the new Web site at www.guysread.com.

The Day I Threw the Trivia Bowl

I have a confession to make: I threw the Trivia Bowl.

In 1988, as an academically advanced (read: geeky) sixteen-year-old, my primary objective in life was the maintenance of my low profile among classmates. I did not want to stick out in any way, especially for anything that had even the faintest whiff of dorkery.

Problem was, I happened to be the captain of a formidable four-man Trivia Bowl team that was to represent the school at the countywide Trivia Bowl competition. For a boy prone to nightmares of academic achievement-related mockery, this was not good.

The night before the Trivia Bowl, I was freaking. I imagined that if we won, they would proudly announce it over the intercom to the entire school during homeroom. This is what they did whenever someone did something notable. I imagined all the kids pointing and laughing at the trivia dork. This prospect terrified me beyond words.

And yet, another part of me desperately wanted to win the Trivia Bowl. I loved trivia and, even more, I loved winning at stuff. It was a terrible dilemma.

The day of the competition comes. We burst out of the gate strongly. What is the capital of Nepal? Kathmandu. What is the largest animal that has ever lived? The blue whale. By the end of the first round, we were in second place and, thanks to a furious late run, had momentum squarely on our side. I was excited, but all the while in the back of my mind, I was imagining that dreaded homeroom announcement.

Things go even better (or worse) in Round Two. We take the lead. As the competition heads toward the finish, it becomes clear that it's a two-team race. Us versus our hated rivals from Massapequa. We go back and forth, trading blows like Foreman and Ali.

It all comes down to one question. If we get it right, we win; if we miss, they have the chance to answer for the win.

No one else on my team knows. They all look at me expectantly. I am well-known amongst them as the assassination expert. They assume I will blurt out the answer, which, of course, is Sirhan B. Sirhan. I hem and haw. What's going on? they are clearly wondering. Rob doesn't know? After what seems like an eternity, I give my answer:

Massapequa pounces and gets it right. My teammates and I watch as they hold aloft the 1988 Trivia Bowl trophy in sweet victory.

The whole ride home, I wrestled with my decision to blow the Trivia Bowl. I felt terrible about what I did, but at least I would avoid homeroom humiliation. Right?

Wrong. The next morning in homeroom:

"Congratulations to eleventh-graders Robert Siegel, Mark Roth, Adam Frankel, and Dan Eckert for their valiant effort yesterday in the countywide Trivia Bowl competition, in which they placed second."

Not only was I a dork, I was a losing dork.

The moral of the story is, if you're ever in a Trivia Bowl, don't throw it. Either way, they're gonna announce it in homeroom, so you might as well win.

Occupation: Former Editor in Chief of The Onion

Our Dumb Century: "The Onion" Presents 100 Years of Head-lines from American's

Dispatches from the Tenth Circle: The Best of "The Onion" with The Onion, Inc.

"The Onion" Ad Nauseam news archives with The Onion, Inc.