The Whole Sweep of Iraqi History, From Genghis Khan's Mongols To The Ottoman Turks To The British Mandate To The American Occupation

Title
Understanding Iraq
Subtitle
The Whole Sweep of Iraqi History, From Genghis Khan's Mongols To The Ottoman Turks To The British Mandate To The American Occupation
Author
William Roe Polk

A historical explanation of the U.S.'s decision to intervene in Iraq explains the Middle-Eastern nation's potential future role in the face of the world's growing energy needs, offering insight into the economic and political forces shaping the region and the events that will affect U.S.-Iraqi relations. 15,000 first printing.

Could a New Dictatorship Arise in Iraq?

April 28, 2005 • Robert Siegel talks with Middle East scholar William Polk about his new book, Understanding Iraq: The Whole Sweep of Iraqi History, from Genghis Khan's Mongols to the Ottoman Turks to the British Mandate to the American Occupation. Polk fears that this could be a period of transition from one dictator to the next in Iraq.

Could a New Dictatorship Arise in Iraq? 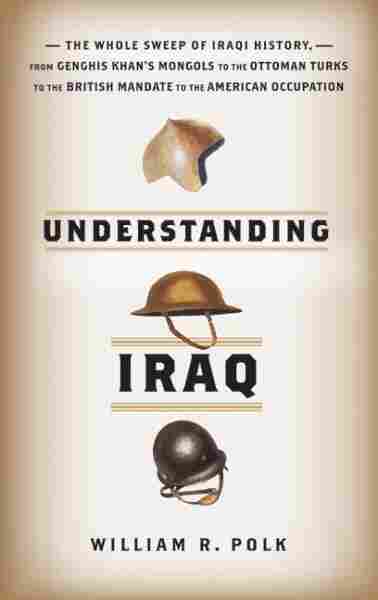 The Whole Sweep of Iraqi History, from Genghis Khan's Mongols to the Ottoman Turks to the British Mandate to the Ameri

Ancestors of inhabitants of today's Iraq began to emerge fromthe long shadows of prehistory about twelve thousand years ago.We cannot see them clearly, but we have some notion of howthey lived. Gathered in groups of fifty or so people, they rangedalong the slopes of the mountains that divide modern Iraq andSyria from Turkey. They did not live in permanent villages butsheltered under lean-tos that were covered with the skins of animals.The men hunted wild animals while the women gatheredwild grasses from which they extracted the seed and poundedthem into digestible bits.

Using crude sickles, faced with flint chips, they scoured thevalleys to collect every edible thing, and, driven by hunger, theyate everything they found. Where archaeologists and paleobotanistshave made studies of their campsites, they have foundmore than a hundred different kinds of seed. Animals and seedwere usually plentiful, but each day brought risk. Their besettingfear must have been famine. Although on average their liveswere reasonably easy, they lived literally hand to mouth, so achance break in the weather might send the wild animals onwhich they depended out of reach or cause wild grasses to wither.

As they hunted or gleaned one area bare, whole clans would pickup their few possessions and move to a new location. Often theyleft caches of seed behind in clay-lined baskets or pits to whichthey planned to return. It is astonishing, in these circumstances,that they left a rich legacy: they became our first farmers.

No one knows exactly how they began this revolutionarynew venture, but the agricultural revolution was probably partlyaccidental. From time to time, someone, perhaps a child, spilleda basket or dropped a handful of seed. Probably also, at leastsome of the caches of seed they left in storage pits or clay-linedbaskets got rained on. Much, of course, would have just rotted.But, over the long years, some would spout into what moderngardeners call "volunteers." Watching this, the tribesmen—andparticularly the women — would naturally find it convenientthat the volunteers were in or around their camps and waterholeswhere they were easy to collect.

At various times when and where rainfall was abundant inthe hills along the northern reaches of what is now Iraq, somepeople began to winnow out seeds or sprouts. From the results,we know that what had probably been an accident certainlybecame a purposeful move. With pointed sticks like the ones theyused to dig up tubers (and the men used to spear wild goats), theypoked holes in the soft mud beside a waterhole or on the bank ofa stream and dropped in a few grains. Probably the seed oftenfailed to come up, but some did. The lucky or those who did itright were more apt to survive periodic famines than their morebackward neighbors. Fear of starvation was a great teacher.Paleobotanists believe that within a few generations these adventurous—and hungry—tribal peoples achieved the first feats ofdomestication. So evident were the advantages of these experimentsthat the example spread widely from encampment toencampment. Sometime around 6000 b.c., "farming" began.

During these years also, the once-bountiful wild game hadbecome harder to find and kill. Some of the little groups scatteredalong foothills and in the valleys of the Zagros — the area thatbecause of its relatively bountiful rainfall has become known asthe Fertile Crescent — had already begun a process that has beentermed "management." Much as Laplanders today work withstill-wild reindeer, they followed and partly managed herds ofgoats. Although goats are today reviled as destructive animalsspreading ruin in fragile ecosystems, they offered great advantageto these early farmers. From accumulations of bones in theircampsites, we know that goat meat was a big part of their diet.They killed enormous numbers, but some of the hunters musthave figured out that killing more than they could eat just producedrotting carcasses that attracted dangerous carnivores.Since there was no advantage in killing all the animals, theremight be a way to postpone the deaths of at least some of them.Keeping them was relatively easy since goats are extremelyadaptable and thrive and breed with little forage. They were amajor contribution to survival of those tribesmen who took thetrouble, since in addition to meat, goats produce milk, whichtribesmen began to drink; fiber for clothing; tallow for light andmedicine; bone for tools; sinew for bindings; and dung for fuel.

Herding and then domestication of animals immediatelycreated two new conditions that were of great and lasting influence.For the first time, little settlements had reasonably securesources of a balanced diet. Fewer people died of hunger, andmore lived longer. As populations increased, the initial trendswere reinforced. Planting crops made staying put both possibleand necessary, but managing or herding animals required somedegree of movement. So divisions of labor, which had long beenpracticed, became more sharply defined. While the women, theelderly, and the very young remained fixed in the village, young men went out, sometimes for weeks or months at a time, to huntor herd animals. This pattern was so stamped by generationafter generation of daily experience that, until just a few yearsago, it was the common way of life throughout the villages ofIraq.

Then, sometime about 6000 b.c., the mountains, foothills,and plains of Iraq became hotter and drier. Upland areas that hadgiven rise to farming could no longer sustain the increasinglydense concentrations of people. To survive, many migrated to places where there was more water. Animals probably showedthem the way in their yearly trek from the highlands in the summerdown into the plains in winter. Following them, the huntersprobably had already established temporary camps along thegreat rivers.Continues...