by Gary Phillips and Jervey Tervalon

NPR stories about The Cocaine Chronicles

April 27, 2005 • Writer and student Detrice Jones reads from "Just Surviving Another Day," her semi-autobiographical story about a teen struggling with her parents' crack addiction. The story is featured in The Cocaine Chronicles, a new collection of short stories about the drug's impact on America. 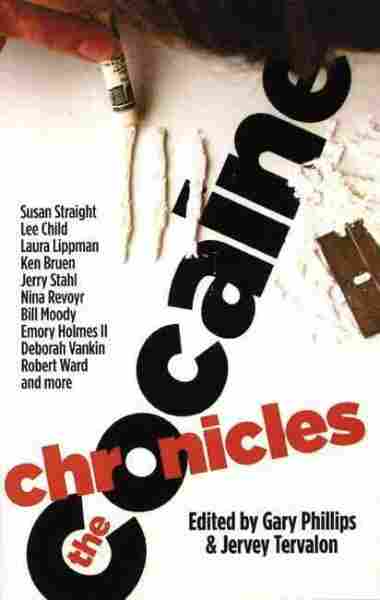 Mostly shit happens, but sometimes things fall in your lap, not often, but enough times to drop a rock on despair. But you can't start in with thoughts of redemption. That would be inappropriate. Such events are not about you. Things fall in your lap not because you're good, but because other people are bad. And stupid.

This guy walked into a bar-which sounds like the start of a joke, which was what it was, really, in every way. The bar was a no-name dive with a peeled-paint door and no sign outside. As such, it was familiar to me and the guy and people like us. I was already inside, at a table I had used before. I saw the guy come in. I knew him in the sense that I had seen him around a few times and therefore he knew me, too, because as long as we assume a certain amount of reciprocity in the universe, he had seen me around the exact same number of times. I see him, he sees me. We weren't friends. I didn't know his name. Which I wouldn't expect to. A guy like that, any name he gives you is sure to be bullshit. And certainly any name I would have given him would have been bullshit. So what were we to each other? Vague acquaintances, I guess. Both close enough and distant enough that given the trouble he was in, I was the sort of guy he was ready to talk to. Like two Americans trapped in a foreign airport. You assume an intimacy that isn't really there, and it makes it easier to spill your guts. You say things you wouldn't say in normal circumstances. This guy certainly did. He sat down at my table and started in on a whole long story. Not immediately, of course. I had to prompt him.

He didn't reply. I didn't press. It was like starting a car that had been parked for a month. You don't just hammer the key. You give it time to settle, so you don't flood the carburetor or whatever cars have now. You're patient. In my line of work, patience is a big virtue.

Right away I knew he was distracted. A guy like that, you offer him a drink, he should ask for something expensive and amber in a squat glass. Not a beer. He wasn't thinking. He wasn't calculating. But I was.

An old girl in a short skirt brought two bottles of beer, one for him and one for me. He picked his up and took a long pull and set it back down, and I saw him feel the first complex shift of our new social dynamic. I had bought him a drink, so he owed me conversation. He had accepted charity, so he owed himself a chance to re-up his status. I saw him rehearse his opening statement, which was going to tell me what a hell of a big player he was.

"It never gets any easier," he said.

He was a white guy, thin, maybe thirty-five years old, a little squinty, the product of too many generations of inbred hardscrabble hill people, his DNA baked down to nothing more than the essential components, arms, legs, eyes, mouth. He was an atom, adequate, but entirely interchangeable with ten thousand just like him.

"Tell me about it," I said, ruefully, like I understood his struggle.

"A man takes a chance," he said. "Tries to get ahead. Sometimes it works, sometimes it don't."

I nodded. No surprise. We were four miles from I-95, and everyone started out muling, hauling keys of coke up from Miami or Jax, all the way north to New York and Boston. Anyone with a plausible face and an inconspicuous automobile started out muling, a single key in the trunk the first time, then two, then five, then ten. Trust was earned and success was rewarded, especially if you could make the length of the New Jersey Turnpike unmolested. The Jersey State Troopers were the big bottleneck back then.

"Clean and clear every time," the guy said. "No trouble, ever."

I nodded again. It was the logical next step. He would have been told to take his plausible face and his inconspicuous automobile deep into certain destination neighborhoods and meet with certain local distributors directly. The chain would have become one link shorter. Fewer hands on the product, fewer hands on the cash, more speed, more velocity, a better vector, less uncertainty.

"I'm impressed," I said, and he brightened a little.

"I got to where I was dealing ten keys pure at a time," he said.

My beer was getting warm, but I drank a little anyway. I knew what was coming next.

"I was hauling the coke north and the money south," he said. I said nothing.

"You ever seen that much cash?" he asked. "I mean, really seen it?"

"You can barely even lift it. You could get a hernia, a box like that."

"I was doing two trips a week," he said. "I was never off the road. I wore grooves in the pavement. And there were dozens of us."

"Well, hell," he said. "There was so much it meant nothing to them. How could it? They were drowning in it."

The guy didn't reply. Not at first. I held up two fingers to the old girl in the short skirt and watched her put two new bottles of Heineken on a cork tray.

The old girl gave us our new bottles and took our old ones away. I said four imports to myself, so I could check my tab at the end of the night. Everyone's a rip-off artist now.

"How much of it did you take?" I asked the guy.

"And how much was that?"

"A million bucks. In cash."

"Okay," I said, enthusiastically, deferentially, like, Wow, you're the man.

I just stared at him.

"From Boston," he said. "Dudes up there are paranoid. They keep the cash and the coke in separate places. And the city's all dug up. The way the roads are laid out now it's easier to get paid first and deliver second. They trusted me to do that, after a time."

"But this time you picked up the cash and disappeared before you delivered the product."

"I told the Martinez boys I got robbed."

"Did they believe you?"

"But I don't see why," he said. "Not really. Like, how much cash have you got in your pocket, right now?"

"So how would you feel if you dropped a penny and it rolled down the storm drain? A single lousy cent?"

"I wouldn't really give a shit," I said.

"Exactly. This is like a guy with two hundred in his pocket who loses a penny under the sofa cushion. How uptight is anyone going to be?"

"With these guys, it's not about the money," I said.

We went quiet and drank our beers. Mine felt gassy against my teeth. I don't know how his felt to him. He probably wasn't tasting it at all.

"They've got this other guy," he said. "Dude called Octavian. He's their investigator. And their enforcer. He's going to come for me."

"You were robbed. What can he do?"

"He can make sure I'm telling the truth, is what he can do. I've heard he has a way of asking questions that makes you want to answer."

"You stand firm, he can't get blood out of a rock."

"They showed me a guy in a wheelchair. Story was that Octavian had him walking on his knees up and down a gravel patch for a week. Walking on the beach, he calls it. The pain is supposed to be terrible. And the guy got gangrene afterward, lost his legs."

"Who is this Octavian guy?"

"Is he another Colombian?"

"Didn't the guy in the wheelchair say?"

"He had no tongue. Story is Octavian cut it out."

"He could walk in here right now. And I wouldn't know."

"Not really," the guy said. "Octavian would find me. I don't want to be looking over my shoulder the whole rest of my life."

I paused. Took a breath.

"People get robbed, right?" I said.

"So you could pin it on the Boston people. Start a war up there. Take the heat off yourself. You could come out of this like an innocent victim. The first casualty. Nearly a hero."

"If I can convince this guy Octavian."

"Just convince yourself first. You were the victim here. If you really believe it, in your mind, this guy Octavian will believe it, too. Like acting a part."

"A million bucks is worth the trouble. Two million, assuming you're going to sell the ten keys."

"Just stick to a script. You know nothing. It was the Boston guys. Whoever he is, Octavian's job is to get results, not to waste his time down a blind alley. You stand firm, and he'll tell the Martinez boys you're clean and they'll move on."

"Just learn a story and stick to it. Be it. Method acting, like that fat guy who died."

"But Octavian will search your crib."

"So the stuff can't be there."

"That's good," I said, and then I lapsed into silence.

"He's going to see you holding out and thinking, Hey, tomorrow this will be over and I'll be back at my cabin or my storage locker or wherever and then I'll be okay. He's going to know."

I finished the last of my beer. Warm and flat. I considered ordering two more but I didn't. I figured we were near the end. I figured I didn't need any more of an investment.

"So you should let me hold the stuff for you. Then you genuinely won't know where it is. You're going to need that edge."

"You could disappear with my two million."

"I could, but I won't. Because if I did, you'd call Octavian and tell him that a face just came back to you. You'd describe me, and then your problem would become my problem. And if Octavian is as bad as you say, that's a problem I don't want."

"You better believe it."

"Where would I find you afterward?"

"Right here," I said. "You know I use this place. You've seen me in here before."

"You can't betray what you don't know," I said.

He went quiet for a long time. I sat still and thought about putting one million dollars in cash and ten keys of uncut cocaine in the trunk of my car.

"There would be a fee," I said, to be plausible.

"Like a penny under the sofa cushion," I said.

"You got that right."

The bar door opened and a guy walked in on a blast of warm air. Hispanic, small and wide, big hands, an ugly scar high on his cheek.