Accessibility links
Hero Mama NPR coverage of Hero Mama: A Daughter Remembers The Father She Lost In Vietnam--And The Mother Who Held Her Family Together by Karen Spears Zacharias. News, author interviews, critics' picks and more.

The award-winning writer for Benched: The Memoirs of Judge Rufe McCombs recounts how she and her two siblings lost their Vietnam soldier father in 1966 and how her mother worked to support the family in spite of such challenges as alcoholism, war stigmas, and a limited education. 20,000 first printing.

April 25, 2005 • Commentator Karen Spears Zacharias is the daughter of an American soldier who was killed in Vietnam. She remembers how her mother held their family together after her father's death. Zacharias is the author of Hero Mama: A Daughter Remembers the Father She Lost in Vietnam — and the Mother Who Held Her Family Together. 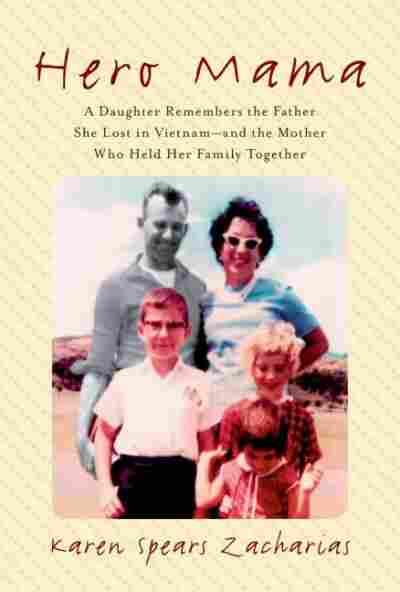 The Man in the Jeep

At first I never even noticed the jeep, what withtrying to tie up the bulldog pup. Grandpa Harvewas sitting in a mesh lawn chair nearby, his dead arm slung down betweenhis legs. His good hand flicked a cigarette stub.

"Karen, you hold her," Mama instructed over my shoulder."Frankie, tie that in a double knot." Daddy's best buddy, DaleFearnow, had given us a prize bulldog as a gift that day. We were allgathered outside the trailer house trying to figure out where to keepsuch a creature in a yard that had no grass or fence.

We hadn't lived at Slaughters Trailer Court in Rogersville, Tennessee,very long. It was just a dirt hill with six trailers slapped upsideit. One was ours, and one belonged to Uncle Woody, Mama's oldestbrother. I'm sure given the situation Mama would have rather notlived in any place named Slaughters.

Folks often laugh when I tell them I grew up a trailer park victim.But when I drive through places like Slaughters, like Lake Forest orCrystal Valley, or any of the other trailer courts I once called home,I ache for the children who live there. And for the circumstances thatled their mamas and daddies to make homes between cinder blockfoundations and dirt yards.

This was late July 1966. Just like any Southern summer, the dayssteamed and the nights stewed. I found myself missing the ocean breezes of Oahu, where we had last lived with Daddy. We'd left theisland just a month before, shortly after I finished third grade.We hadfamily in Rogersville,where both my parents had grown up.

"I knew the minute I saw that jeep," Mama told me later. "Therearen't any military bases in East Tennessee."

I don't remember having any premonitions myself. I was used toseeing jeeps. We had lived near military bases all my life. Fort Benning.Fort Campbell. Schofield.

"Shelby Spears?" the soldier asked. He was clutching a white envelope.His fingers trembled.

"Yes?" Mama replied. Her whole face went taut as she clenchedher jaw. She turned and handed the pup over to Brother Frankie. LittleLinda hid behind Mama, rubbing her bare toes in the dirt. "Finishtying him up," Mama instructed.

Then, pulling down the silver handle of the trailer door, shestepped inside. The soldier followed.

I looked over at Grandpa Harve. His eyes were hidden behinddark sunglasses. A white straw hat shielded his drooping head. SisterLinda followed the soldier. I followed her. Frankie followed me.

For years now, I have tried to remember what happened next. Butit's as if somebody threw me up against a concrete wall so violentlythat my brain refuses to let any of it come back to me. I suppose thepain was so intense my body just can't endure it.

I recall only bits. Crying. Screaming. Hollering like a dog doeswhen a chain is twisted too tightly about its neck.

Grasping Mama's hand, Linda buried her face in her thigh.

I was confused. Who was Charlie? Who was this soldier? Why wasMama crying? "What is it?" I asked. "What's happened?"

"Daddy's dead!" Frankie yelled back at me, punching the wallagain. "They've kilt our daddy! I'm gonna kill them Charlies!"

I had never seen Mama cry before.

Not even that December night in Hawaii when Daddy left us.

Sister Linda was six years old and was already asleep when Daddyand Mama asked Frankie and me to come into the living room. "Weneed to talk," Daddy said.

He'd never asked us to talk before. Not officially, like he was callingtogether his troops or something. Mama sat real quiet beside himon the red vinyl couch. Frankie and I sat on the hardwood floor,dressed in our pajamas, ready for bed.

"Frank, Karen," Daddy said, "I believe you both are old enoughnow to understand some things."

I was thankful he recognized my maturity. After turning over awhole can of cooking oil on top of my head earlier that eveningwhile helping Mama in the kitchen, I was feeling a bit insecure aboutmy status as the family's oldest daughter. I was nine years old.

"You both know who President Johnson is?"

We nodded in unison.

Daddy continued, "There's a country that needs our help, SouthVietnam. President Johnson has asked me to go."

"Whadda you gonna do there?" I asked.

"It's in Southeast Asia.We'll be helping protect the country fromcommunism."

Tears stung. Not because I understood what communism was, orthat Daddy would be in any danger. Simply because my daddy wouldbe leaving me.

"Frank, you're the man of the house now," Daddy said. "I needyou to take care of your mama and sisters."

"Yes, sir," Frankie replied, his voice too steady for a boy of justeleven.

"Karen," Daddy said, looking directly at me, "you need to helpMama take care of Linda. Okay?"

I held my tears until after I hugged Mama and Daddy and climbedinto bed. Scrunching myself between the cold wall and the edge ofmy mattress, I began to cry.

A few minutes later Daddy flipped on the light. On the bed nextto mine, curled into a ball like a kitten, a sleeping Linda didn't eventwitch. "Karen?"

"Yes, sir?" I said as I wiped my nose on the back of my forearm.