A successful, happily married neurosurgeon, Henry Perowne is drawn into a confrontation with Baxter, a small-time thug, following a minor motor vehicle accident, an encounter that has savage consequences.

April 11, 2005 • Ian McEwan is the author of the best-selling novel Atonement. His latest novel, Saturday, takes place during one single day of a neurosurgeon's life. It is set in a post-9/11 world.

March 19, 2005 • Ian McEwan talks about Saturday, which tracks a neurosurgeon over a single day. McEwan says the parallels to Virginia Woolf and James Joyce may seem obvious in limiting a narrative to 24 hours, but he was more influenced by Saul Bellow and John Updike. 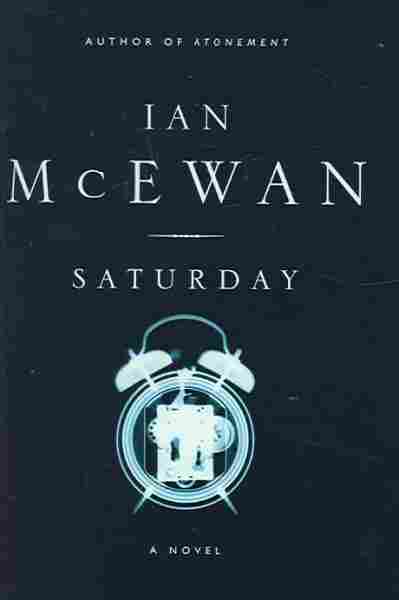 Some hours before dawn Henry Perowne, a neurosurgeon, wakes to find himself already in motion, pushing back the covers from a sitting position, and then rising to his feet. It’s not clear to him when exactly he became conscious, nor does it seem relevant. He’s never done such a thing before, but he isn’t alarmed or even faintly surprised, for the movement is easy, and pleasurable in his limbs, and his back and legs feel unusually strong. He stands there, naked by the bed – he always sleeps naked – feeling his full height, aware of his wife’s patient breathing and of the wintry bedroom air on his skin. That too is a pleasurable sensation. His bedside clock shows three forty. He has no idea what he’s doing out of bed: he has no need to relieve himself, nor is he disturbed by a dream or some element of the day before, or even by the state of the world. It’s as if, standing there in the darkness, he’s materialised out of nothing, fully formed, unencumbered. He doesn’t feel tired, despite the hour or his recent labours, nor is his conscience troubled by any recent case. In fact, he’s alert and empty-headed and inexplicably elated. With no decision made, no motivation at all, he begins to move towards the nearest of the three bedroom windows and experiences such ease and lightness in his tread that he suspects at once he’s dreaming or sleepwalking. If it is the case, he’ll be disappointed. Dreams don’t interest him; that this should be real is a richer possibility. And he’s entirely himself, he is certain of it, and he knows that sleep is behind him: to know the difference between it and waking, to know the boundaries, is the essence of sanity.

The bedroom is large and uncluttered. As he glides across it with almost comic facility, the prospect of the experience ending saddens him briefly, then the thought is gone. He is by the centre window, pulling back the tall folding wooden shutters with care so as not to wake Rosalind. In this he’s selfish as well as solicitous. He doesn’t wish to be asked what he’s about – what answer could he give, and why relinquish this moment in the attempt? He opens the second shutter, letting it concertina into the casement, and quietly raises the sash window. It is many feet taller than him, but it slides easily upwards, hoisted by its concealed lead counterweight. His skin tightens as the February air pours in around him, but he isn’t troubled by the cold. From the second floor he faces the night, the city in its icy white light, the skeletal trees in the square, and thirty feet below, the black arrowhead railings like a row of spears. There’s a degree or two of frost and the air is clear. The streetlamp glare hasn’t quite obliterated all the stars; above the Regency façade on the other side of the square hang remnants of constellations in the southern sky. That particular façade is a reconstruction, a pastiche – wartime Fitzrovia took some hits from the Luftwaffe – and right behind is the Post Office Tower, municipal and seedy by day, but at night, half-concealed and decently illuminated, a valiant memorial to more optimistic days.

And now, what days are these? Baffled and fearful, he mostly thinks when he takes time from his weekly round to consider. But he doesn’t feel that now. He leans forwards, pressing his weight onto his palms against the sill, exulting in the emptiness and clarity of the scene. His vision – always good – seems to have sharpened. He sees the paving stone mica glistening in the pedestrianised square, pigeon excrement hardened by distance and cold into something almost beautiful, like a scattering of snow. He likes the symmetry of black cast-iron posts and their even darker shadows, and the lattice of cobbled gutters. The overfull litter baskets suggest abundance rather than squalor; the vacant benches set around the circular gardens look benignly expectant of their daily traffic – cheerful lunchtime office crowds, the solemn, studious boys from the Indian hostel, lovers in quiet raptures or crisis, the crepuscular drug dealers, the ruined old lady with her wild, haunting calls. Go away! she’ll shout for hours at a time, and squawk harshly, sounding like some marsh bird or zoo creature.

Standing here, as immune to the cold as a marble statue, gazing towards Charlotte Street, towards a foreshortened jumble of façades, scaffolding and pitched roofs, Henry thinks the city is a success, a brilliant invention, a biological masterpiece – millions teeming around the accumulated and layered achievements of the centuries, as though around a coral reef, sleeping, working, entertaining themselves, harmonious for the most part, nearly everyone wanting it to work. And the Perownes’ own corner, a triumph of congruent proportion; the perfect square laid out by Robert Adam enclosing a perfect circle of garden – an eighteenth-century dream bathed and embraced by modernity, by street light from above, and from below by fibre-optic cables, and cool fresh water coursing down pipes, and sewage borne away in an instant of forgetting.

An habitual observer of his own moods, he wonders about this sustained, distorting euphoria. Perhaps down at the molecular level there’s been a chemical accident while he slept – something like a spilled tray of drinks, prompting dopamine-like receptors to initiate a kindly cascade of intracellular events; or it’s the prospect of a Saturday, or the paradoxical consequence of extreme tiredness. It’s true, he finished the week in a state of unusual depletion. He came home to an empty house, and lay in the bath with a book, content to be talking to no one. It was his literate, too literate daughter Daisy who sent the biography of Darwin which in turn has something to do with a Conrad novel she wants him to read and which he has yet to start – seafaring, however morally fraught, doesn’t much interest him. For some years now she’s been addressing what she believes is his astounding ignorance, guiding his literary education, scolding him for poor taste and insensitivity. She has a point – straight from school to medical school to the slavish hours of a junior doctor, then the total absorption of neurosurgery training spliced with committed fatherhood – for fifteen years he barely touched a non-medical book at all. On the other hand, he thinks he’s seen enough death, fear, courage and suffering to supply half a dozen literatures. Still, he submits to her reading lists – they’re his means of remaining in touch as she grows away from her family into unknowable womanhood in a suburb of Paris; tonight she’ll be home for the first time in six months – another cause for euphoria.