Accessibility links
They Made America NPR coverage of They Made America: From the Steam Engine to the Seach Engine: Two Centuries of Innovators by Harold Evans, Gail Buckland, and David Lefer. News, author interviews, critics' picks and more.

From the Steam Engine to the Seach Engine: Two Centuries of Innovators

A history of the United States's major inventors and innovators includes coverage of such figures as Henry and Edsel Ford, cosmetics entrepreneur C. J. Walker, and Google founders Sergey Brin and Larry Page.

NPR stories about They Made America

November 5, 2004 • Historian Harold Evans talks about great inventions by Americans. Evans' book, They Made America, profiles well-known inventors, and some obscure geniuses — the inventors of the gas mask, the credit rating and the retail franchise. Hear Evans and NPR's Steve Inskeep.

Excerpt: They Made America 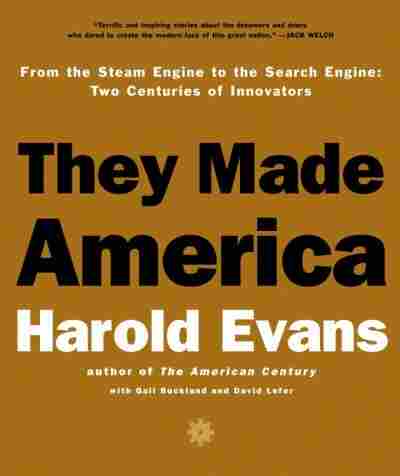 Chapter One The HEROES Who Got America Going

The American Declaration of Independence was only one of three landmarks in 1776 In Glasgow that year, on March 8, James Watt unveiled the first commercial model of his condensing steam engine, the fulcrum of the industrial revolution, and from the same Scottish city a few days later Adam Smith published his Wealth of Nations, the foundation of a new era of economic thought on both sides of the Atlantic. He analyzed and extolled the virtues of manufacturing, with its division of labor, of free trade and the benefits to society from reasonable men pursuing self-interest without much restriction by government.

When the 13 states became the United States with the peace of 1783, America was an empty land, an agrarian nation with only half as many people (four million) as the mother country. No city was a tenth the size of London The new Americans had endured a long war and dissension; they had barely begun to realize how great were the natural resources they could now exploit or even to decide whether they wanted to do so. The thoughts that made pulses beat faster were pastoral; the heroes of popular culture were generals and statesmen, clergymen and landed gentry. Adam Smith concluded that no manufactures "for distant sale" had ever been established in America because of the lure of uncultivated land. He noted that as soon as a producer of goods-Smith called him an "artificer"-had acquired more stock than he needed, he did not extend his own business. He was not tempted by large wages and the easy subsistence this might bring. "He feels that an artificer is the servant of his customers from whom he derives his subsistence; but that a planter who cultivates his own land, and derives his necessary subsistence from the labor of his own family, is really a master and independent of all the world." Colonialism had also fostered a habit of mind inimical to manufacturing and industry: The British imperial practice, known as mercantilism, had been to regard all colonies as sources of raw materials, not places for manufacturing.

The fomenters of the American Revolution were more or less of the same mind. They were men of property, imbued with the notion that society was best sustained by farming, fishing and trading; manufacturing was envisaged as women at home making cloth, rugs, soap and garments, men fashioning furniture, shovels and chains, and itinerant tinkers, smiths and carpenters filling the gaps left by the cottage workshops. Capitalism was not in their vocabulary, and if it had been it would have been as a dirty word. Benjamin Franklin constantly inveighed against the individual accumulation of wealth. In the 27 specific complaints in the Declaration of Independence, the founding fathers said nothing about the injustice of England's unpopular curtailment of American manufacturing or methods of financing it. The principal writer had clear ideas on what kind of society America should become: "While we have land to labour then," wrote the Virginian Thomas Jefferson in a letter in 1781, "let us never wish to see our citizens occupied at a workbench, or twirling a distaff. Carpenters, masons, smiths are wanting in husbandry; but for the general operations of manufacture, let our workshops remain in Europe." Gouverneur Morris foresaw a time when America "will abound with mechanics and manufacturers," but he and Alexander Hamilton were relatively isolated in seeing the potency of the industrial revolution gathering force in England. John Adams of Massachusetts clung to land as the only true wealth, turning aside, to his loss, Abigail's wifely advice to invest in securities. Even Franklin, businessman, scientist and inventor, exalted agriculture and looked down on trade.

Everything turned on individual enterprise. The national government was weak, and the laissez-faire ideas of Adam Smith had taken root. George Washington, in his first message to Congress in 1970, recommend "giving effectual encouragement to the introduction of new and useful inventions from abroad," but he could not get Congrcss to fund a national university. Alexander Hamilton, and especially his assistant secretary at the Treasury, Tench Coxe (1755-1824), pleaded in vain for the allocation of public money to encourage invention and manufacturing. Several states advertised bounties for the introduction of machinery, or the production of such known items as wool cards, sulfur, wire and fabrics, but those pockets did not have deep linings. The number of state charters granted to enable business concerns to raise money did double from 1786 to 89 by comparison with 1781 to 85, but capital was meager, skill scarce and the general atmosphere depressing.

How was it then that this backward, dozy America led the world in developing the steamboat? It is true that the seminal steamboat service, developed by Robert Fulton in 1807, employed a British low pressure Watt-Boulton engine, but by 1830 the flourishing Mississippi Basin steamers were powered by high-pressure engines of original American invention. It is true also that geography was a midwife. America's vast river systems and lakes, with forests yielding fuel on the run, offered more scope for the steamboat than Britain's relatively constricted internal waterways, which were flanked not so much by forests as faster roads for stagecoaches. Still, Britain was the leading maritime nation, with plenty of opportunities for steamboat entrepreneurs in intracoastal and cross-Channel trade. The vicissitudes of its weather were far less violent. And it had engineering and financial muscle to spare. William Symington (1763-1831) had a steamboat up and running on a Scottish ornamental lake as early as 1788 with an engine of his own design. It says something again about the significance of individuals that Symington lost interest when his financial backers withdrew in 1803 and nobody followed up.

A negative factor in England lay in the positive achievement of James Watt and Matthew Boulton in manufacturing steam engines of Watt's design. The 25-year monopoly the partners held, an extension of the original patent, was a major discouragement to other potential experimenters. The partners were eager to defend their rights, resistant to joint ventures. Who can blame them? It took the full 25 years to recoup the initial investment and finance the long battles in court. Additionally, Watt himself, so crucial a figure in the industrial revolution, lent his prestige to sustained skepticism about the potential of steam for navigation.

In the end, the character of America's steamboat pioneers lies at the heart of the country's early ascendancy in steam navigation. John Fitch (1743-1798), who launched the first practical steamboat in 1787, was too ignorant to know of Watt's misgivings and too headstrong to care if he had known. And u here Symington faltered without a patron, Fitch persevered against all the odds. The very different characters of the magnetic Robert Fulton, his calculating partner Robert Livingston and the rebellious Henry Shreve were critical to the development of the steamboat-and the steamboat was the entering wedge of the industrial revolution in the Ohio valley and the Midwest. The machine shops and foundries that made steam engines and iron for the new steamboats attracted a fruitful concentration of skilled mechanics to Pittsburgh and Cincinnati, to Wheeling, Louisville and later St. Louis. One set of numbers gives an idea of the accelerating pace. In the ten years from 1809-19, the gross tonnage of steamboats built rose from 1,000 to 17,000, but in 1830 the figure was 64,000-and 202,000 in 1840.

By 1830, with the exhilarating success of the steamboat, Americans were eager to follow England in the epic innovation of the railway. The new spirit was optimistic and even bumptious, imbued with the idea that America could surpass the world in its inventions. Jefferson was not immune to the nascent doctrine of American perfectibility. In 1785 he was writing to Abigail Adams in Paris, beseeching her to send him two sets of fine linen tablecloths and napkins from England, "better and cheaper than here." By 1812 and the war with England, he was rhapsodizing about the textile machines he had installed at his estate by which two 12-year-old girls and two women were making all his family's linen, cotton and woolens: "Our manufacturers," he brags, "are very nearly on a footing with those of England."

The movement from defeatism to exuberance, from confinement to expansion, took 50 years, but there were two events that can be marked as red letter days. The first was on Monday, March 3, 1824, for which the steamboat was the catalyst. In one of the most profound legal rulings in American history, a great judicial innovator, John Marshall, chief justice since 1801, ended a steamboat monopoly imposed by New York State, but his judgment affected more than navigation rights. It altogether liberated the conduct of business across the United States.

The second emancipating event was in 1838, when the inventors were finally accorded protection under a national patent law. Before 1790 they had to win exclusive licenses-state by state-for varying terms. The first federal patent law in 1790 simplified matters, but it merely set up a registry of claims without examination. Patents could be registered with out any proof of originality so that several people might hold a patent for the same idea. Inventors still had to spend time and money in defense of their property. Cyrus McCormick (1809-1884) was 25 when he won a patent in 1834 for the grain reaper he had invented at the age of 22, but after the expiration of the basic patent in 1848 he was engaged for the rest of his life in trying to protect his improvements. The prolific inventor and innovator Oliver Evans was so dismayed by a judge's ruling that patents were against the public interest that he went home and destroyed his papers.

The early innovators featured in this first section endured much in changing the atmosphere of America and setting the nation on a new course.