Holocaust survivor Meyer Maslow, the head of a human rights foundation, is baffled by the entreaties of Vincent Nolan, a young neo-Nazi who inadvertently transforms the lives of other people in his attempts to change his own life. By the author of The Lives of the Muses.

NPR stories about A Changed Man

April 2, 2005 • Novelist Francine Prose talks about her humorous new novel A Changed Man, in which a neo-Nazi goes to work for a human rights organization run by a Holocaust survivor. None of the characters are free from Prose's comic barbs. 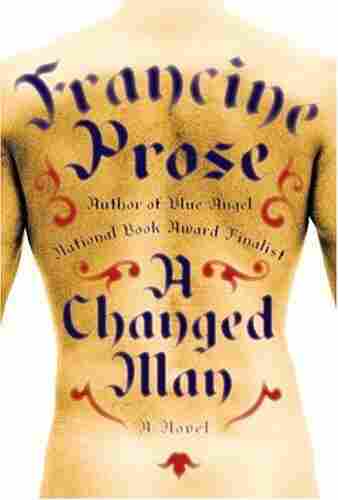 Nolan pulls into the parking garage, braced for the Rican attendant with the cojones big enough to make a point of wondering what this rusted hunk of Chevy pickup junk is doing in Jag-u-ar City. But the ticket-spitting machine doesn't much care what Nolan's driving. It lifts its arm, like a benediction, like the hand of God dividing the Red Sea. Nolan passes a dozen empty spots and drives up to the top level, where he turns in beside a dusty van that hasn't been anywhere lately. He grabs his duffel bag, jumps out, inhales, filling his lungs with damp cement-y air. So far, so good, he likes the garage. He wishes he could stay here. He finds the stairwell where he would hide were he planning a mugging, corkscrews down five flights of stairs, and plunges into the honking inferno of midafternoon Times Square.

He's never seen it this bad. A giant mosh pit with cars. Just walking demands concentration, like driving in heavy traffic. He remembers the old Times Square on those righteous long-ago weekends when he and his high school friends took the bus into the city to get hammered and eyeball the hookers. He's read about the new Disneyfied theme park Times Squareland, but that's way more complicated than what he needs to deal with right now, which is navigating without plowing into some little old lady. A fuzzball of pure pressure expands inside his chest, stoked by patches of soggy shirt, clinging to his rib cage.

It's eighty, maybe eighty-five, and he's the only guy in New York wearing a long-sleeved jersey. All the white men seem to be running personal air conditioners inside their fancy Italian suits, unlike the blacks and Latinos, who have already soaked through their T-shirts. What does that make Nolan? The only white guy sweating. The only human of any kind gagging from exhaust fumes. While Nolan's been off in the boondocks with his friends and their Aryan Homeland wet dream, an alien life-form has evolved in the nation's cities, a hybrid species bred to survive on dog piss and carbon monoxide. Nolan needs to stop thinking that way. Attitude is crucial.

Last night, at his cousin Raymond's, he'd watched the TV weatherchipmunk chirping about the heat wave, so unseasonable for April, reassuring local viewers with his records and statistics lest anyone think: Look out, global warming, the world is ending right now. Why is everyone so surprised that the planet's cutting them loose? Ecological Armageddon was just what the doctor ordered to take Nolan's mind off his own problems as he'd faced the dark hours ahead until it was time to get up and borrow Cousin Raymond's truck, his money and pills, and vanish into the ozone. Nolan's hardly slept for two weeks, ever since he decided to turn. Two Xanax did nothing to stop his lab-rat brain from racing from one micro-detail to another.

Like, for example, sleeve length. Should he hide the tattoos? Or just wear a T-shirt and let them do the talking? If one picture's worth a thousand words, that's the first two thousand right there, two thousand minus the hi howareya nicetameetcha. Which was one reason to get the tats: cut through a load of hot air. On the other hand, strolling into the office of World Brotherhood Watch with Waffen-SS bolts on one bicep and a death's-head on the other might make it harder for Nolan to get his point across - let's say, if the people he's talking to are hiding under their desks. Nolan wouldn't blame them. It hasn't been all that long since that lone-wolf lunatic in L.A. shot up the Jewish temple preschool.

In any case, it's going to be tough, explaining what he's doing at Brotherhood Watch, especially since Nolan himself isn't exactly sure. There are some ... practical issues involved with stealing Raymond's truck plus the fifteen hundred bucks that, if you want to be literal, belongs to the Aryan Resistance Movement. But there's more to it than that. If it were just a question of disappearing and starting over, Nolan could have some fun. Sell SUVs in Palm Springs, deal blackjack in Las Vegas. Go to Disney World, put on a Goofy suit, let toddlers fuck with his head.

What he'd really like to do is give every man, woman, and child in the world the exact same hit of Ecstasy, the same tiny candy, pink as a kitten's tongue, that managed to turn his head around, or more precisely, to give his head a little - well, a fairly big - push in the direction it was already headed. But that's not going to happen, free Ex for the human race, so maybe the next best thing is to help other people find a more gradual route to the place where the Ex took Nolan.

Meanwhile, he knows that thinking like this will only get in his way. He'll stay cooler if he convinces himself that he's just interviewing for a job.

Has it only been two weeks since Nolan finally made up his mind? A long two weeks of trying to figure it out, even - especially - after he knew how he was going to do it.

No one promised it would be easy. But Nolan has prepared. He's read up, starting with two books by Meyer Maslow, the founder and current head of the World Brotherhood Watch Foundation. He actually went out and ordered them through the bookstore in the mall. The first book, The Kindness of Strangers - Maslow's tribute to the people who saved his life when he was on the run from the Nazis - was what made Nolan begin to think that maybe his plan could work.

For balance, Nolan has also been reading The Way of the Warrior, a paperback he took from the tire shop, borrowed from the backseat of a Ford Expedition some yuppie brought in for the Firestone recall.