Accessibility links
Evolution's Captain NPR coverage of Evolution's Captain: The Story of the Kidnapping That Led to Charles Darwin's Voyage Aboard the "Beagle" by Peter Nichols. News, author interviews, critics' picks and more.

Follows the story of Robert FitzRoy, the captain of the HMS Beagle, who enlisted Charles Darwin as a companion for a journey originally intended to return natives to their homeland and whose fundamentalist views clashed with those of Darwin, who made his famous discoveries during the voyage. Reprint. 50,000 first printing.

March 12, 2005 • When Scott Simon got in the back of Will Grozier's London taxi, the conversation was so lively that Simon still turns to him for reading suggestions. Grozier offers a list of what he's been reading lately. 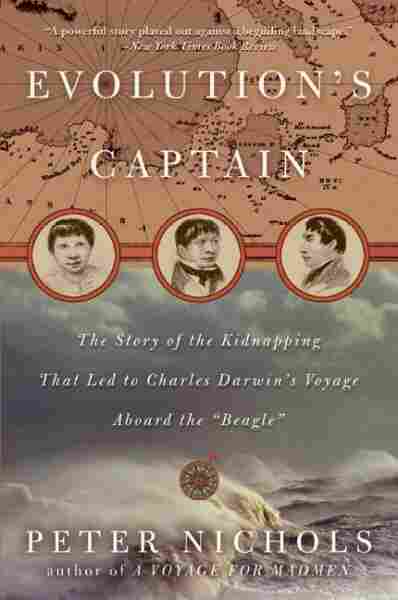 Port Famine, Strait of Magellan, August 2, 1828. It is mid-winter at the bottom of the world. Snow drives at gale forceacross the small vessel at anchor. Daylight comes as a few gloomyhours of crepuscular dimness, and the afternoon is already growingdark. Four years later in this same anchorage, in this samevessel even, a young man of unusually sunny temperament — thetwenty-four-year-old Charles Darwin — will write in his journal:"I never saw a more cheerless prospect; the dusky woods, piebaldwith snow, were only indistinctly to be seen through anatmosphere composed of two thirds rain & one of fog; the rest,as an Irishman would say, was very cold unpleasant air."

Alone in his cabin beneath the poop, the vessel's commander, aman still in his twenties, is in the last stage of despair. For him timehas lost its swift flow; it has flattened into an unending, intolerablestasis. He sees no relief. He has been in these desolate waters fortwo years: years more stretch ahead. Home — England, a place asdistant as Earth from this cold Pluto — is beyond imagining,beyond regaining.

He raises to his head a small pocket pistol. He is certain ofthis now, eager for it, and his finger at last tugs with resolve onthe trigger.

But there is still too much time: in the long second that stretches between the release of the hammer, the spark of flint,the flash of powder, and the explosion that sends the ball on itspath, his hand wavers, crucially.

He was Captain Pringle Stokes;the vessel, HMS Beagle. It lay atanchor in Port Famine with a larger ship, HMS Adventure. Thetwo ships, under the overall command of Captain Phillip ParkerKing, had been dispatched by the British Admiralty in May 1826to survey the southern coasts of South America, from Montevideoon the Atlantic to Chiloé Island in the Pacific. They were particularlyinstructed to map what they could of the still largelyunknown seacoast of Tierra del Fuego, the desolate, tortuouslylabyrinthine southernmost tip of the drowned Andes.

The first passage from the Atlantic to the Pacific had beendiscovered by the Portuguese navigator Ferdinand Magellan, in1520. He was looking, as was Columbus, as were they all, forthat still elusive western route to the spice islands of the Indies.Columbus died in 1506, never knowing he had not found them.It was the Spaniard Vasco Núñez de Balboa who, on September26, 1513, scaled a hilltop on the isthmus of Darien, in what isnow Panama, and first saw the South Sea stretching away in limitlessdistance beyond Columbus's mistaken Orient. This informationexpanded the known circumference of the world bymore than a third. Seven years later, Magellan, seeking access tothat South Sea, found a wide, navigable passage between thebottom of the Americas and, below that to the south, a bleakTerra Incognita. His chronicler, Antonio Pigafetta, who sailedwith him, recorded the discovery with an exultant pride:

We found by a miracle, a strait which we call the strait of theEleven Thousand Virgins; this strait is a hundred and tenleagues long which are four hundred and forty miles, andalmost as wide as less than half a league, and it issues intoanother sea which is called the Peaceful Sea; it is surrounded by very great and high mountains covered with snow. I think thereis not in the world a more beautiful country, or a better straitthan this one.

Magellan's strait is actually 310 miles long from Atlantic toPacific; but in the weeks they took to pass through it, Magellanand the four ships in his small fleet probably sailed five timesthat distance. To port, to the south as they tacked endlesslyagainst westerly winds, they saw signs of natives in the dim firesand smoke on the shores of Terra Incognita. Much later, back inSpain, in accounts of the voyage, the land on this southern shoreof the strait became known as Tierra del Fuego, Land of Fire.

The only other route from the Atlantic into the Pacific, theopen sea passage around a rock mistaken for the southerly capeof Tierra del Fuego, discovered in 1616 by the Dutch captainWillem Schouten of Hoorn, was an exposed and awful place.There, icy winds blast at hurricane force down the glaciers of theAndes, and freak waves driven by westerly winds unimpededaround the bottom of the globe meet off Schouten's false cape ina nightmare maelstrom that was and remains a desperate placefor any vessel. Seeking a fast passage to Tahiti in 1788, WilliamBligh tried to force his ship, HMS Bounty, past this Cape Horn.He spent over a month tacking back and forth, making only ahandful of miles to westward in all that time. He, and moreespecially his crew, became so demoralized that he turnedaround and sailed the other way to Tahiti, eastward around agood part of the world, just to have the winds at his back.

Bligh knew too little about the twisting Strait of Magellanimmediately to his north to force his ship through it with a fractiouscrew. Forty years later, blizzard-bound on its northernshore, the Adventure and the Beagle were attempting to chart asafe passage through the strait, to find a less forbidding route forships passing between the Atlantic and the Pacific.

Though neither their commanders nor the lords of the Admiraltywho had penned their orders saw them as such, the two shipsanchored in Port Famine were part of the grandest design of history — so audacious that not until it was in place was it truly seenby those who had made it. In this year of 1828, the British EastIndia Company had been flourishing for two centuries ...Continues...