Accessibility links
The Book of Customs NPR coverage of The Book of Customs: A Complete Handbook to the Jewish Year by Scott-Martin Kosofsky and Lawrence Kushner. News, author interviews, critics' picks and more.

A Complete Handbook to the Jewish Year

by Scott-Martin Kosofsky and Lawrence Kushner

Presents a guide to Jewish customs, ceremonies, and holidays, including historical references, prayers, and traditions.

NPR stories about The Book of Customs

'The Book of Customs': A Jewish Guide for Americans

September 29, 2004 • NPR's Karen Grigsby Bates talks with Scott-Martin Kosofsky about his new work, The Book of Customs: A Complete Handbook for the Jewish Year. The author researched several centuries-old guidebooks on Jewish rituals and customs to write a contemporary version for American readers.

'The Book of Customs': A Jewish Guide for Americans

Excerpt: The Book Of Customs 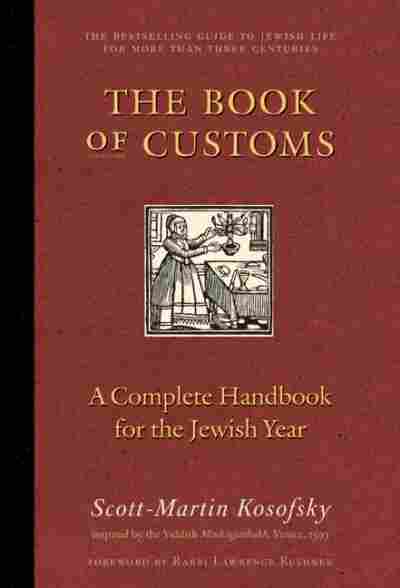 A Complete Handbook for the Jewish Year

Fifteen years ago, while looking for illustrations to use in my first Judaica project, The Harvard Hillel Sabbath Songbook, I came across reproductions of several Renaissance woodcuts in an old Jewish encyclopedia. Their source was given as "Sefer minhagim, Amsterdam, 1645." At the time I had reclaimed only enough of my Hebrew school education to know that sefer means "book"; the other word was familiar, but I couldn't quite remember its meaning. To learn more, I would have to see the book. The Harvard libraries had several books with that name or similar names, and still more on microfilm, including one that matched the particulars given in the encyclopedia. When I saw how minhagim was spelled in Hebrew, I looked it up and found that it means "customs." What I had stumbled upon was the Book of Customs.

I was charmed at first sight. I had in my hands something I had never seen before: a compact guide to the Jewish year, complete with over forty delightful illustrations of the main holidays and rituals. I knew this because, despite the Hebrew title by which it was cataloged, the book was in Yiddish with prayers in Hebrew. So rather than a lofty Sefer minhagim or Sefer haminhagim, it was in reality a humble Yiddish customs book, the Minhogimbukh. I grew up in a household in which Yiddish was a principal language, and that I still had some ability in the language gave me an entrée. That it was a fine example of book design brought it into my professional realm. I noticed interesting differences in the six editions I saw at Harvard, which inspired me to ask about the books at other institutions and before long I saw some thirty more at the libraries of the Jewish Theological Seminary, Hebrew Union College, and Brandeis University and still others from the Bodleian Library at Oxford. Their dates were spread across the range of the book's history, 1566 to 1874.

I was surprised to discover that while a few of the illustrations were known, having been reproduced here and there, the book itself had no reputation. It was just one of the myriads of old Jewish books. I learned from a few Judaica librarians that it was especially well neglected because scholars of Judaism have paid little attention to books in Yiddish, written as they were for the unwashed and unlettered; Yiddish scholars, as a rule, are interested in literature, not in religion. That the early editions are in Old Yiddish, before the Slavic influences had become so much a part of the language, placed it even further from mainstream interests. Curiously, this book, which had been so useful for so long, had no successor. I was quite pleased to hear this; the book's outsider status made it available to become my book, my point of departure for a journey into the realm of Jewish learning.

From the many editions of the Minhogimbukh I had photocopied, ten of the woodcuts made their way into The Harvard Hillel Sabbath Songbook. The others were pasted into a scrapbook, arranged by theme: Sabbath cuts on one page, Passover cuts on another, whole sets bundled at the back. The thought of preparing a new edition occurred to me early on, but it was years before I felt capable of doing so. Fortunately, the Songbook was a success (it's still in print after all these years), and many more Judaica projects came my way, each an opportunity to become more engaged with Judaism. This wasn't to be a Homeric journey home through rough seas and great perils. Instead, it was an near-accidental discovery that became an ever-increasing influence on my work and life. Perhaps it was bashert — "meant to be," as one says in Yiddish. My grandmothers would have thought so.

A History of the Minhogimbukh

For over four hundred years, the Minhogimbukh was among the most popular Jewish books in the European Diaspora, just after the Bible, the siddur (prayer book), and the Passover haggadah. It was published as the people's guide to the Jewish year in dozens of editions fromAmsterdam to Venice to Warsaw and Kiev. In addition to its rich presentation of the rituals and prayers, the book's illustrated editions featured the zodiac and the seasons of farm life, giving it an additional role as a kind of Jewish Old Farmers' Almanac. Its roots were in the Hebrew Sefer minhagim written in the late fourteenth or early fifteenth century by the Hungarian rabbi Eyzil (Isaac) Tyrnau, one of a number of such works from the late Middle Ages. The Tyrnau text circulated in manuscript for about one hundred fifty years before its first printed edition, still in Hebrew, was published in 1566 in Venice.

Eyzik Tyrnau's time was one of tragedy and loss. His book was writ ten in the aftermath of the Black Death (1348-1350) in the belief that there was a kind of symbolic equivalence between a people and it customs. By preserving its customs, even if only in writing, the community would survive the pestilence, expulsions, harsh laws, and persecution that characterized Jewish life of the period. Tyrnau's work was thorough and well organized, setting the pattern for the later books customs...Continues...