When a murderer ends the lives of Edward and Paige Norbois and their four children, sheriff Hugh DeWitt, still grieving over the tragic death of his infant son, investigates the husband's extramarital affair, a thieving business partner, and the killer's possible motives. By the author of Ordinary People. 75,000 first printing.

NPR stories about The Tarnished Eye

August 2, 2004 • Alan Cheuse reviews The Tarnished Eye by Midwestern writer Judith Guest. Cheuse says the book is a sweetheart of a novel, even though the plot is based around the slaying of an entire family. 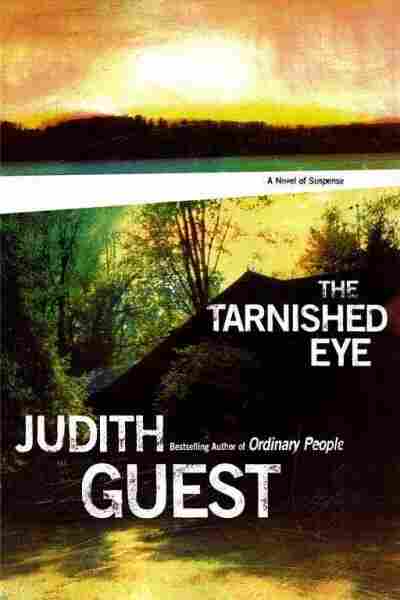 A Novel of Suspense


Chapter One: Digging Up

Hugh DeWitt stands at the window, looking out at his wife as she gently uproots slips of lettuce from the soil. She likes pulling the tender new shoots first, leaving room for the rest to grow and prosper. Her garden gloves lie discarded in the middle of the row. Hugh has bought her several pair over the years — these last ones, expensive kidskin from Gardeners' Eden — but she doesn't like them any better than the cheap, cotton variety she picks up at Okum's; they're all too bulky for the job. She needs to get her bare hands around the slender stems. He loves this paradox — his tidy wife, so firm about purity and order, with this passion for grubbing around in the dirt.

She's wearing blue knit shorts and a sleeveless yellow T-shirt. Her feet are bare. Bare knees pressed into the soft earth. Beside her is the straw basket Becky made for her in art class, nearly full of greens. Soon she'll stop, come inside, rinse the leaves in the sink, and pat them dry between paper towels.

Beside him, curled up in the wing chair, is his daughter, busily writing in the pages of her daily journal. Her grandma Hannah gave her the book last Christmas, and she hasn't missed a day in the last seven months. "This is exactly the age when I started," Hannah told Hugh. "I've been doing it ever since." When he asked her if she ever went back to read over the entries, she laughed. "Oh heavens, no. It's all I can do to just get the stuff down." What's the point, then, in all this scribbling if there's no corresponding passion for review, Hugh wonders. Somehow it doesn't seem polite to ask.

Becky smiles up at him. "Daddy, d'you know what a pluot is?"

"It's half plum and half apricot." She shows him the picture she has drawn, below which she has lettered:

"Mom and I picked some up at Glen's today. They taste like a very firm peach."

"Why don't they just call them peaches, then?"

Becky ignores him. "I was thinking we could make some pluot jam and sell it at a roadside stand. Like the Millers. We could sell green beans and lettuce and heirloom tomatoes out of Mom's garden."

"The Millers," Hugh points out, "are megafarmers. They do this for a living. Plant, weed, water, harvest. Break your back. Get up at five in the morning, go to bed at midnight. And they don't make any money."

"Because. Mr. Miller told me. They're thinking about selling the place and moving to the Upper Peninsula."

"Can we buy it, then? Mom loves to garden. She knows tons about fruits and vegetables."

Hugh shakes his head. "Truck farming's not for sissies."

"Who says I'm a sissy?" Karen says, coming in from the kitchen. "Are the Millers really going to sell, Hugh? The twins will graduate next year. I thought they'd be taking over."

"I didn't say it was. But growing up where everyone knows you and knows what your father does for a living and then assumes it's what you'll do might not be so great either. What if one of them meets somebody at college who isn't so thrilled about becoming a farmer's wife?"

"Is that what happened?"

"I'm merely speculating," says Hugh. "Anyway, Miller says it's getting too crowded down here. He likes the wide open spaces."

She frowns. "Well, he'll find plenty of space in the U.P., that's for sure — along with rocky land and a shorter growing season."

Not the first time he's heard this threat. "Good. Be a cop. Be a house painter. Dig to China. I'm all for people doing just what they want to in life."

His daughter isn't fooled; she eyes him reprovingly. "Jesse Spence's father says most dads want their kids to follow in their footsteps."

"Jesse Spence's dad's a funeral director. He's got to believe that."

Hugh follows Karen into the kitchen, watching as she dumps the lettuce into the sink and turns on the cold water.

"Mom, Dad doesn't believe there's such a thing as a pluot," Becky calls from the living room.

"He didn't use to believe in arugula either," Karen says. "He'll come around."

"It's the corruption," Hugh says. "All this combining of perfectly adequate foodstuffs just to prove that it can be done. I remember once I had a banorange. It tasted terrible." He reaches into the water to grab up a handful of greens, shakes them gently and drops them onto the square of paper towel spread open on the counter. "Want these torn up?"

Becky comes to stand in the doorway. "So can we buy the Miller place?"

"Bigger pieces, Dad," Becky advises, moving in to help. "No need to make confetti out of it." Only ten years old and already she's an expert at bossing him around. "Remember," she says, "Mom and I won't be home for dinner tomorrow. We're going to Traverse City to get me a new swimsuit and some jodhpurs. For camp."

Becky rolls her eyes. "Oh, Daddy," she sighs. "Why do you always have to be such a daddy?"

"Light the grill, will you?" Karen asks him. "I was going to cook inside, but it's just too hot."

He carries the plate of cleaned trout out to the backyard. She's right about the heat. Each morning for the past three weeks he has ridden into town with the patrol car windows down and the air-conditioning blasting. By 8 AM it feels like a smelting oven; there's been no rain in a month. Fire warnings are at the highest postings. People are starting to call in with all sorts of weird complaints. His deputy, Ian Porterfield, calls it Combustion Craziness.

But that isn't what's bothering him, is it? On this blistering July afternoon? Three years ago today. Becky at day camp, thank God. An all-day outing in the Sleeping Bear Dunes, an accident of timing. Too bad there are so many of those. Fuck all, he thinks, fuck if I'm going to goddamn do this thing all over again. But he is, obviously.

He reaches below the grill for the lever on the propane tank, gives it a vicious twist. Karen is watching from the window, and he sends her a cheery grin. Faking it. They are both faking it today, July the twenty-first, 2004. The third anniversary of their infant son's death. How many years will it take? How many before he can think of it without pain? Without remorse? Before he can simply remember Petey as a pudgy, dark-haired, eleven-month-old, patiently refusing a spoonful of strained peas or pounding his palms on the high chair to gain their attention? Those four tiny ragged teeth; the look of baffled irritation when things didn't go his way; the piercing metrical screams employed to summon them?

Three years ago today Peter Weldman DeWitt simply took it in his head not to wake up from his afternoon nap. Sudden Infant Death Syndrome, they called it. No one's fault. An accident of timing. If you'd happened to enter the nursery at the instant he stopped breathing, you might even have saved him, the doctor had said. Fucking wonderful news to drop at a mother's feet. He was enraged at the stupidity of the remark, enraged at his own stupidity in leaving town that day for a meeting. And he had been driving Karen's car, in order to get it serviced in Ann Arbor. The engine was running rough. Otherwise, he would have been in the patrol car and would have known the instant the call came in, would have turned around, been back in time to go through it with her. Instead, he discovered it on his arrival in Ann Arbor and had to drive the four and a half hours back to Blessed, knowing it was too late, Petey was gone. Gone forever, his feisty, handsome son, who would have been four years old next month. So now there are two calendar dates, forever marked and awkwardly celebrated.

Does Petey's big sister ever think about him? She was so proud of her baby brother, so fiercely protective. Yet she hardly ever mentions his name. But, then, neither does he, and he thinks about him every goddamn day.

At least there is no longer the relentless agony of that first year, nor the awful resignation of the second. He is grateful for the fact that time has passed. And here they are, once again, at this anniversary, which will have to be spoken about; Karen will insist upon it.

She is at the back door now, watching him as he tests the fillets with a fork.

"Just about ready," he says.

"Good." She hesitates in the doorway, and he knows what's coming, would like to head it off, at least for now.

"You having dinner with your mom tomorrow night? While you're down there?"

"Drive carefully, okay? Call before you start back. Sometimes the cell phone doesn't work along that stretch."

"I will. But don't worry if we're later than ten o'clock." She pulls the door closed behind her. "You know, Hughie, we're not that poor," she says. "A new bathing suit won't break us."

"Just because your dad was a cop," she says, "doesn't mean you had to become one. You did have some choice in the matter."

"What were you saying, then?"

He lifts the fillets, one by one, onto a clean platter. He won't answer this. She knows as well as he does that's not what it's really about.

Hannah, his mother-in-law, is a genius at breaking through to the corner of his mind where Petey still resides, alive and well, dimples flashing, black hair in sweaty ringlets around his face. She, who once gave him a book on the proper way to grieve. He read it, too, but it didn't do much for him. Except now he knows it's wrong to bury this stuff, to refuse to share it with loved ones. And he knows too much — about death and the unexpected, about a world that he took for granted, assuming the forces propelling it were, in the main, orderly and benign. He wouldn't share this knowledge with his worst enemy.

Following Karen into the house, he bows his head briefly, surreptitiously. Forgive me. Deliver me. Amen.