Today More Than Ever

The former governor of New York and current Lincoln scholar offers a politicized treatment of the famous president's legacy, arguing that the founder of the Republican Party would scarcely recognize the values preached by the current incarnation of his party. 75,000 first printing.

NPR stories about Why Lincoln Matters

Lessons from Lincoln for Today's World

July 20, 2004 • In his new book, Why Lincoln Matters: Today More Than Ever, former New York governor Mario Cuomo examines the writings and speeches of one of America's most beloved presidents, Abraham Lincoln, on issues relevant to today's world, including pre-emptive war, taxes and religion in politics. Cuomo speaks with NPR's Steve Inskeep.

Lessons from Lincoln for Today's World 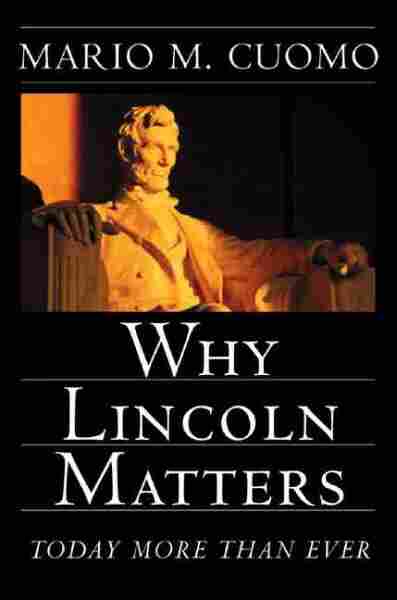 the year was 1992. The scene was the Republican National Convention in Houston, Texas. Republicans were about to renominate President George Bush for a second term and then return home to try convincing American voters that the nation's economic recession had little to do with the Republican Party, its philosophy, or its standard-bearer. The task must have seemed daunting. In the end it proved impossible, but for one brief moment the goal seemed within their grasp. That was when the much-loved former president, Ronald Reagan, arrived at the speaker's rostrum to rouse the faithful to a renewed dedication to modern Republican ideals.

He did so by invoking the name of Lincoln. Exhuming a credo that President Reagan told us had been "so eloquently stated" by Lincoln generations earlier, the fortieth president quoted what he described as four of Lincoln's most appealing maxims. Here was a hallowed set of principles, Reagan declared, that had stood the test of time and deserved to be recalled and repeated again and again to fortify America against a resurgent liberalism. To some people listening to Reagan that night, the phrases must have seemed crafted to rebut with uncanny specificity the rise of Governor William Jefferson Clinton of Arkansas. As the newly anointed Democratic challenger to twelve consecutive years of Republican White House rule and leading in all the public-opinion polls, Clinton posed a formidable threat to Reagan's conservative revolution. Now Reagan summoned all of his rhetorical gifts to remind the hundreds of delegates packing the convention hall and the tens of millions more watching on television that another Republican, Abraham Lincoln, had once wisely offered the following timeless truths:

You cannot strengthen the weak by weakening the strong.

You cannot help the wage earner by pulling down the wage payer.

You cannot help the poor man by destroying the rich.

You cannot help men permanently by doing for them what they could and should do for themselves.

The convention floor erupted in waves of applause. TV cameras captured the faces of emotional delegates whose nods of assent evidenced the deep understanding and gratitude one feels upon hearing a revered pastor deliver a grand sermon. Reagan had resurrected a tablet of political commandments more prescient and eloquent than any arid Republican Party platform or windy acceptance speech. No one had ever said it better than the Great Emancipator as revivified by the Great Communicator. It was a magical combination. As politics and performance, even liberal Democrats admitted that it was good.

As it turned out, it was indeed too good to be true.6 In fact, Lincoln had never uttered a word of it. The lines turned out to be the work of an obscure German-born, Brooklyn-ordained minister named William John Henry Boetcker, and they dated back to only 1916-fifty-one years after Lincoln's death. That year, Boetcker published a tract entitled Lincoln on Private Property. The pamphlet featured a unique format: the true words of Lincoln on one page followed by interpretive quotations from Boetcker on the next. The ideas quickly found an appreciative audience among conservatives. Republican clubs clamored for copies, and the booklet went into new editions in 1917, 1938, and 1945. Unfortunately, in each subsequent incarnation Boetcker progressively receded into the background until Lincoln was receiving sole and undeserved credit for aphorisms he had never uttered. One later edition boasted that the words were Lincoln's exclusively and were published at the "inspiration of William J. H. Boetcker." By the time Ronald Reagan got around to quoting these lines, the true source of the inspiration had faded into the shadows. When the truth finally surfaced, a Reagan spokesman, scrambling for an explanation, said that the former president had done all his own research. As the sole author of the speech he had found the "Lincoln" quotations in a book called The Toastmaster's Treasure Chest by one Herbert V. Prochnow. It was passed off as an understandable mistake, but it is an indelible one.7

Few of the millions who heard Reagan that summer night ever read the explanations or the corrections published in newspapers during the days following his remarks. Nor did they learn that with a brilliant editorial stroke, Reagan had craftily omitted two of those spurious Boetcker-authored quotes-two that did not seem to fit his call for fealty to Republican principles 1992-style. After all, how could the chief executive who had presided over the accumulation of the most massive federal deficit and debt in the nation's entire history possibly say:

You cannot keep out of trouble by spending more than your income.

Ronald Reagan deleted those phrases from his recitation. But he had said enough to lay powerful, if spurious, claim to Lincoln's political blessings. Three full years after scholars had discredited Reagan's Houston Lincoln reference, one of the most widely read newspaper columnists in the nation blithely published the Boetcker quotes once again. To Ann Landers, the words Reagan had quoted still seemed irresistibly Lincolnian.8

Claiming the mantle of Lincoln started long before President Reagan's faux pas. It has been part of the fabric of political discourse practically from the moment Lincoln was assassinated on Good Friday, 1865-barely a week after restoring peace to a country torn by the long, blood-soaked Civil War. In eulogies delivered at churches throughout the north that Easter Sunday, Lincoln was confirmed as a secular saint. That was a nearly miraculous elevation for one who was among the most severely criticized of all of our presidents: Lincoln had been mocked, scorned, and ridiculed by much of the nation until he was lifted above the clamor by his martyrdom. Gone was the hateful derision. To many, he had suddenly become a second Moses, proclaiming liberty throughout the country but perishing before he could enjoy the promised land; to others, he was an American savior dying for the sins of his bitterly divided people.9

Before long, politicians took up where preachers had left off. In the furious debate over postwar Reconstruction, conservatives and so-called radicals both claimed they were pursuing the path to reconciliation that Lincoln himself had charted. Then at the dawn of the twentieth century, Democrats like William Jennings Bryan began suggesting that they, too, might be entitled to claim a portion of Lincoln's legacy. An angry New York Times article replied that "every word of that noble man ought to be a rebuke" to such Democratic presumption, but the indignation of the Times did nothing to inhibit the Democrats.10 Lincoln's reputation, buoyed by the centennial observances of his birth, remained high; and competition to claim Lincoln for political inspiration and advantage came to embrace all political faiths. A golden age of Lincoln literature was just getting underway, and politicians were eager to lay claim to its riches. It would have been unnatural for politicians not to clamber aboard the bandwagon.

Theodore Roosevelt, who as a child had viewed Lincoln's funeral procession in New York City, proudly confided to White House correspondents that he kept a portrait of Lincoln behind his presidential desk. "When I am confronted with a great problem," he explained. "I look up to that picture, and I do as I believe Lincoln would have done." Roosevelt felt comfortable pursuing what he called a "Jackson-Lincoln theory of the presidency," meaning that he would be an active executive prepared to do even what Congress was reluctant to approve. Lincoln, Teddy Roosevelt claimed, had practiced "tempered radicalism," and so would he. By then the competition to claim Lincoln had come to embrace all political faiths. By the time the 1912 election rolled around, Democrat Woodrow Wilson felt compelled to establish an association of his own with the great Lincoln. Explaining that he was in search of the unique inspiration Lincoln could provide, the Democratic nominee even made a pilgrimage to the sacred and hitherto exclusively Republican mecca of Springfield, Illinois, Lincoln's hometown.

Requests for permission to make copies of any part of the work should
be mailed to the following address: Permissions Department, Harcourt, Inc., 6277 Sea Harbor Drive, Orlando, Florida 32887-6777.