The illegitimate half African-American daughter of the southern Senator best known for his twenty-four-hour filibuster against the Civil Rights Act of 1957 reveals the discrepancies between the father she knew and his public persona, drawing on years of correspondence between her father and herself. 75,000 first printing. 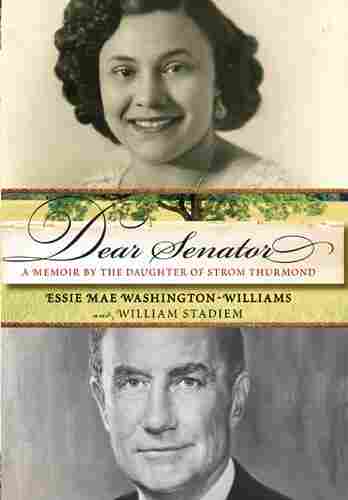 I always thought I had a fairly normal childhood, until I found out myparents weren't who I thought they were. I grew up in Coatesville, Pennsylvania,a small town in the hills along the Brandywine River on the threshold ofthe rich farmland of the Amish country. We were only forty miles fromPhiladelphia, and the main line of the Pennsylvania Railroad ran through ourtown. And yet Philadelphia might as well have been the moon. That was theBig City. Coatesville was nowhere, but for a little girl it was everywhere — itwas all I had and all I knew. Coatesville was what was considered a one-horsetown, but that horse was a very powerful steed called steel. The Lukens SteelCompany dominated everything about our town. Its dozens of soaringsmokestacks dominated the skyline. They were our own skyscrapers. Even thesmoke belching from those enormous stacks was a point of pride, not pollution.That pungent, thick, black soot meant the mills were working full blast,that the little town was booming. It was the smell of money.

Like most men in Coatesville, my father, John Henry Washington, workedfor the steel mills. Bethlehem Steel and Worth Brothers Steel had huge plantsin Coatesville, but the colossus was Lukens Steel. Like an industrial octopus,Lukens had devoured its rivals and made them its own. The matriarch of thebusiness was a legendary local character named Rebecca Lukens, known as"The Woman of Steel." She was an independent woman, far ahead of her time, a Pennsylvania version of a steel magnolia. Rebecca was the driving forcebehind the expansion of her family 's Brandywine Iron Works into an internationalpowerhouse. She was one of the first women in America to run a majorcompany, and her daughter married a man named Huston. When I was growingup, the Hustons were Coatesville's first family. They lived in a grandmanor house called Terracina and were to Coatesville what the Kennedys orthe Rockefellers are to America. Despite the small size of the town (15,000people), I never met a Huston, and, by the same token, I never aspired to becomea woman of steel. American women today have those sort of huge "haveit all" ambitions, but growing up black during the Great Depression, I wasperfectly happy to dream about becoming a nurse. That was a pretty big dealat the time, and I was more ambitious than most.

My mother, or at least the woman who I thought was my mother, kepthouse, while daddy worked on the assembly line. Mother had worked as apicker in the cotton fields of South Carolina and said that was enough hard laborfor two lifetimes. I had a half-brother, Calvin Burton, who was mymother's son by a previous relationship, which I later learned was not an actualmarriage. Calvin was seven years older than I, and by the time I was thirteen,in 1938, he had left home to live in New York City. I had fantasies offollowing him there, to become a nurse in a big city hospital, but these wereonly fantasies. At thirteen, I still hadn't gotten to Philadelphia.

We lived in a small, two-story, three-bedroom row house in a neighborhoodcalled The Spruces, named after the tree, which was populated by otherblack steelworkers. Most of them, like my family, hailed from the South. I hadmy own room, which seemed like a castle to me. The house was heated withcoal stoves, and ther e was no r unning water or any bathr ooms. We had to usean outhouse in the back and take tub baths in the bedroom using water we'dcarry from an outside pump. It sounds primitive, but it seemed normal then,although the winters were awfully cold, and the day of the week the big sanitationtrucks would come to clean the outhouses was the smelliest day youcould imagine. We'd all try to stay away from home on that day. I remembervisiting the home of a white girlfriend. The house wasn't any nicer than ours, but it did have an indoor toilet. It seemed like the ultimate in high technologyat the time.

I'll never forget the wonderful dinners we'd have: fried chicken, biscuits,lots of fresh vegetables, and the sweetest pies made with local peaches, strawberries,apples, and plums. Every night was like Thanksgiving. My mother,who was tall and slim and a great cook, always wore a kerchief around herhead. That seemed old-fashioned at the time, as did her habit of chewing tobaccoand expelling it into a spittoon. I gathered that it was an old southerncustom she'd brought with her. I didn't question her about it. In fact, I didn'ttend to question things at all. My parents were of the "children should be seenand not heard" school. As a little girl I started out quite chatty, but one daymy mother warned me "that mouth of yours can get you into trouble," afterwhich I learned to keep it shut.

We never talked much at those fine dinners, partly because we were all listeningto the radio all through the meal. That was our ear to the world. Despiteall the bad news that seemed to be coming through the airwaves — theseemingly endless Depression, the rise of the Nazis in Europe, disasters likethe Hindenburg airship explosion — the feeling around the table was very positive.My father, a handsome man who always came to the table after a hard,dusty day at the mills immaculate and smelling deliciously of soap andcologne, always said a blessing of thanks, for the food, for his job, for his wonderfulfamily, and for funny or odd things, like Shirley Temple, or CharlieChan, or Heinz ketchup ...Continues...