The Most Important Speeches of America's Presidents, from George Washington to George W. Bush

by Michael Waldman and George Stephanopoulos

Presents the texts of more than forty speeches from American presidents, along with an audio disc of recordings of the speeches.

NPR stories about My Fellow Americans

January 18, 2005 • When President Bush delivers his inaugural address Thursday, he will contribute to a relatively rare genre: the second inaugural. We look back at memorable speeches the second time around for Presidents Lincoln, Franklin Roosevelt and Nixon. 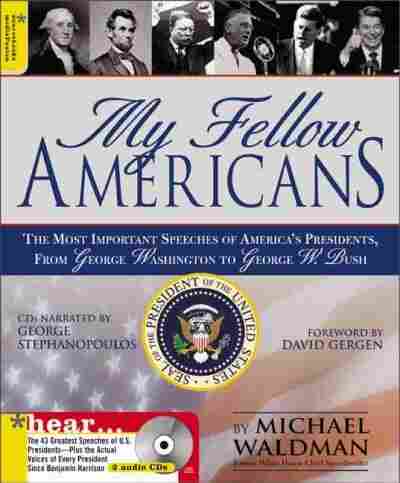 "Four score and seven years ago"..."A date which will live in infamy"..."Ask not what your country can do for you"..."Mr. Gorbachev, tear down this wall!" From our earliest days, and especially in the past century, presidents have led with their words-using what Theodore Roosevelt called the "bully pulpit" to inspire, rally, and unite the country. By moving ordinary citizens, these speeches moved history. Franklin Roosevelt called the presidency "preeminently a place of moral leadership." As he understood, only a president can speak, with a clear voice, to the whole country-and on behalf of the nation to the world. If you want to understand American history, the great speeches of American presidents are a good place to start. And not just to read them, but to hear them.
My Fellow Americans selects the forty-three most significant speeches by American presidents, from George Washington to George W. Bush. These speeches are those most remembered by later generations, or those that will most likely be so recalled. Introducing each speech, I explain the historic context, the goals of the talk, and its composition. Two audio CDs integrate into the text, featuring the actual voices of all the presidents since Benjamin Harrison.
A few explanations are in order.
First, the complete speeches are presented in most cases, though some have been edited for length.
Second, this book focuses on those speeches made by presidents while they were in office. There are three exceptions, however: Abraham Lincoln's "House Divided" speech, Theodore Roosevelt's "New Nationalism," and George H.W. Bush's 1988 convention address, each chosen because of the way it illuminates key themes of the presidency of those three men.
Third, most of these speeches date from the twentieth century. Before then, presidents rarely spoke in public. When they did, they didn't ask citizens to support specific policies. When presidents addressed the public, they usually did so in writing. We have included three of those written addresses-George Washington's "Farewell Address," and two by Andrew Jackson-because their ringing phrases lived beyond the day's controversies.
The memorable speeches in this book teach us about our country in several ways. The very first presidential talk, Washington's inaugural, called our nation a great "experiment." Perhaps a great argument is more like it-a long conversation, stretching over two centuries, about what we stand for.
The best presidential addresses call on our nation to live by its ideals, first (and best) expressed in the preamble to the Declaration of Independence. Time and again, presidents rely for moral authority on what historian Pauline Maier calls our "American scripture." Lincoln at Gettysburg argued that the country's founding vision required us to end slavery. Roosevelt argued that the same ideals required a new strong central government to combat economic inequality. Ronald Reagan quoted those same founders to argue instead for a more limited government. And presidents from Wilson to Roosevelt to Reagan to Bush have sought to extend that vision worldwide.
There are lessons here for aspiring leaders and would-be "great communicators." These speeches-for all their pomp and poetry-are distinguished by their muscularity. They are more than words; they are action. They convey big ideas, often controversial ones. They are memorable not solely because they are eloquent, but because, so often, they pressed people to change their minds.
In the end, the fact that we still listen to these words reflects well on our democracy. Usually, presidents cannot command. They can only persuade. For all the majesty of office, they rise only as far as they bring the people with them. True, citizens no longer huddle around the radio, anxiously listening to FDR's latest fireside chat. But in the crowded and dangerous days since September 11, 2001, we again listen intently to the words of our president. In a time of crisis, for all our cynicism, we look to the president for inspiration, information, and direction. This book-along with the CDs that accompany it-gives us a chance to hear for ourselves how, in our best moments, our leaders have challenged our ideas, stirred our hearts, and moved our nation.