Outlines principles for ethical behavior while counseling readers on how to put ethical thinking into practice, drawing on the stories of leaders, whistleblowers, and everyday people to examine such events as the Enron scandal, the space shuttle tragedy, and the war in Iraq. By the author of How Good People Make Tough Choices. 25,000 first printing.

January 12, 2005 • Three recent headlines have prompted questions about America's "moral compass": CBS's firings of four staff members over a polically charged story about President Bush's military service during the Vietnam War; the revelation that a black syndicated columnist accepted money to promote a White House program: and the indictment of six businessmen in an AOL billing scandal. NPR's Tony Cox discusses these and other ethical concerns with Rushworth Kidder, founder of the Institute for Global Ethics in Camden, Maine and author of the new book Moral Courage. 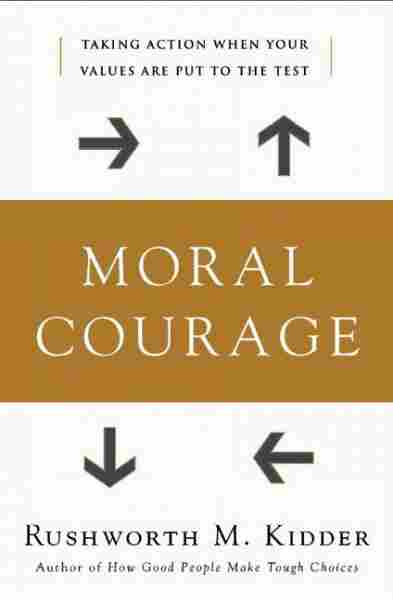 Standing Up for Principle

You gain strength, courage, and confidence by every experience inwhich you really stop to look fear in the face. You are able to say, "Ilived through this horror. I can take the next thing that comesalong." ... You must do the thing you think you cannot do.
-- Eleanor Roosevelt

Like most private schools, St. Paul's School for Boys posts athletic schedules on its Web site. In the spring of 2001, it listed baseball games, tennis matches, and crew events on its leafy campus in suburban Baltimore. But not lacrosse. Not that spring. Despite being ranked number one in anationwide lacrosse poll earlier in the year, this prestigious 151-year-oldinstitution canceled its entire varsity season on April 3.

The reason? Earlier in the spring, a sixteen-year-old member of thelacrosse team had a sexual encounter with a fifteen-year-old girl fromanother private school — and, without her knowledge, videotaped thewhole thing. He was apparently mimicking a sequence in American Pie (a movie some of the students had recently seen) in which a character broadcasts a live sexual encounter on the Web. When his teammates gathered at another player's home to look at what they thought would be game tapes of an upcoming rival, they saw his video instead.

None of the teammates objected. Nobody tried to stop the showing.Instead, they watched.

What happened next is a tale of moral courage — a lack of it amongteammates who failed to stand up against the video, and the expression ofit by an administration that took a formidable public stand. Their debatewas a wrenching one. At St. Paul's, lacrosse has a sixty-year history. It garners solid alumni support, which translates into funding. And it attractssome of the best young players in the region — so many that St. Paul'sruns the risk of being seen, as one administrator put it, as "a 'jocks rule'type of school." But its students are still required to attend chapel. As aninstitution affiliated with the Episcopal Church, it retains a serious traditionof ethical concern. And it seeks to be a private community dedicatedto serious education in a very public world.

What do you do when a popular sport crosses swords with an ethicalcollapse? In this case, the answer was clear. The headmaster, Robert W.Hallett, stepped in immediately, asking not only (as some who were thererecall), "What happened to our school?" but more particularly, "Whathappened to this young woman?" The boy who made the video wasexpelled. Thirty varsity players were suspended for three days and sent tocounseling with the school's chaplain and psychologist. Eight junior varsityplayers were made to sit out the rest of the season. And the varsity seasonwas terminated.

"At a minimum," Hallett wrote to parents," we should expect each boyhere will, in the future, have the courage to stand up for, to quote theLower School prayer, 'The hard right against the easy wrong.' "

He might well have been speaking for his own administration. Choosingthe "right" was, in fact, hard. It meant disappointing parents, students,alumni, and national lacrosse fans. It meant facing a spectrum ofcriticism that ran all the way from "You made a mountain out of a molehill!"to "You let them off too easily!" It put at risk an array of crucial relationshipswith donors and friends, religious affiliates, advisers and counselors recommending the school to potential enrollees, and the entire Baltimore community. It set in motion a pattern of events that might have either plunged the offending students into deep reflection and self-improvement or pushed them out of the educational arena altogether. And it brought the young woman, who remains anonymous, into the center of a national story over an incident she wanted to put behind her.

Moral courage doesn't always produce an immediate benefit. In thiscase, however, it did. The student at the center of the controversy latergraduated from a local public school. The young woman moved out ofstate and continued her education. Both appear to have landed on theirfeet. Hallett, who moved on to an executive position outside education,was swamped with letters praising his stand, which he kept, and requestsfor interviews on national television, which he turned down. And in themonths following the decision, St. Paul's found that requests for admissionsmaterials actually increased, and that a smattering of financial giftsarrived from new donors far beyond the Baltimore community whowanted to express their gratitude.

Standing up for values is the defining feature of moral courage. Buthaving values is different from living by values — as the twenty-first centuryis rapidly learning. The U.S. soldiers who abused Iraqi prisoners atAbu Ghraib prison, the CEO of Italian food giant Parmalat who keptquiet as financial malfeasance proliferated, the Olympic athletes whosuccumbed to steroids, the American president who deceived the worldabout his sexual escapades — these were not horned and forktailed devilsutterly devoid of values. Yet in moments of moral consequence theyfailed to act with integrity. Why? Because they lacked the moral couragethat lifts values from the theoretical to the practical and carries us beyondethical reasoning into principled action. In the defining moments of ourlives — whether as a student watching a videotape or a president facing anation — values count for little without the willingness to put them intopractice.Without moral courage, our brightest virtues rust from lack ofuse. With it, we build piece by piece a more ethical world.Continues...