When life draws to an end, we face a flurry of often heartbreaking decisions. Are there any last treatments to try? How much longer can a patient hold on? When is it time to turn off the ventilator — and who should make the call? Lee Gutkind's essay collection Twelve Breaths a Minute captures the experiences of doctors, caregivers, family members, 911 dispatchers and others who have learned valuable lessons from witnessing life's final moments. 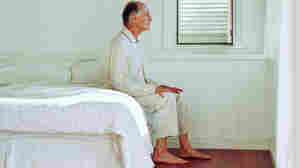 When surgeon Catherine Musemeche's mother's aneurysm ruptures, Musemeche goes from being a physician to being a worried daughter, and must balance her professional medical knowledge with faith in other doctors and her human capacity for hope.

I remember an elderly woman with failing kidneys who developed uncontrollable bleeding from her gastrointestinal tract. The chief resident and I were trying to stabilize her so we could take her to the operating room. She had been sick a long time, and it was difficult to find a vein. We stuck her everywhere, trying to get another line in so we could administer blood products and medications. We stuck her in the groin, the chest, all up and down her arms and legs. Occasionally she would withdraw, moaning. The next thing I knew, she coded, and we started what was to be the first of many rounds of CPR. After the second or third round I was sensing the hopelessness of the situation. By that time the woman was comatose.

"How long are we going to keep doing this?" I asked the chief resident.

"As long as she keeps coming back we're going to keep going," he said. "I'm going to get some sleep for a couple of hours. Let me know if anything changes."

I stayed at the woman's bedside until morning, occasionally sitting down in a rocking chair for brief periods when she stabilized. But then her heart would start to slow, and I would jump up again and start CPR. The air was saturated with the stench of blood mixed with feces as the bleeding continued. I had to transfuse her to keep up with what we were losing, but that only made her electrolytes worse, and then her heart would start to slow again. It was becoming obvious how this was going to end. She was never going to be ready for the operating room.

Her death, hours later, was the conclusion to one of the worst nights of my life. I had participated in a full-blown flail — a sequence of medical maneuvers that couldn't possibly be successful but are performed against all better judgment. I felt terrible about it — for the patient, who deserved better, and for those of us who participated. Whatever comes next for my mother, I hope she is not flogged this way with painful procedures that cannot save her.

There is a final common pathway for older patients like my mother. She was in shock for hours and spent even more hours in a huge life-saving operation. Her organs have been severely taxed and are now susceptible to failure. They could go one by one or they might all crash at the same time. She would never survive it.

I want to believe the doctors will do what is best for her, but I know even that isn't always guaranteed. Sometimes their judgment is clouded by ego or the inability to face the possibility of failure. I remember taking care of an elderly man with extensive vascular disease. The blockages in his arteries were threatening the viability of his leg and causing severe pain. The only way the leg could be saved was with a bypass operation. He was eighty years old, anemic, and a Jehovah's Witness. His religion strictly prohibited a blood transfusion. His blood count was already low. He and his family were facing a difficult choice. Did they risk an operation to save the leg? He might lose the leg no matter what we did, and of course there was going to be more blood loss if he had the bypass. They needed reliable information so they could make as close to an informed decision as was possible. The attending surgeon met with them. He reassured them and told them everything would be fine. The man might need to be in the ICU a few days, but he should pull through. They should at least give the bypass a try.

As the resident it was my job to assist. There was more scarring than expected from a previous operation. Working our way through the dense tissue took time and created more bleeding. I started counting the blood-stained sponges in the bucket at my feet. There were too many. We were losing too much blood. I asked if we should change our strategy. Maybe we wouldn't complete the operation. Maybe he would lose the leg, but at least our patient wouldn't die a cold, lonely death on the table.

The surgeon, however, saw the situation differently. But as the hours ticked by the sponges kept dropping into the pail. The patient's blood pressure started to drop. The EKG showed signs of cardiac ischemia. There weren't enough red blood cells to carry oxygen to the heart. The anesthesiologist started to fidget. He opened up the intravenous fluids and told the surgeon to hurry up.

When we finally finished, our patient was barely alive. His blood pressure was dangerously low and his heart was racing. We ran as we wheeled him back to the ICU. When the stat labs came back, he had the lowest blood count I had ever seen in a living person, a hemoglobin incompatible with life. He was comatose. He was going to die unless we acted quickly. But we couldn't. The family would not consent to a transfusion. They were firm in this decision, but it was clear they felt betrayed. Death was always a risk, but they never expected it would come to this, their loved one bleeding to death in a poorly planned operation that took much too long.

I don't know how long my mother has or where this will end. I want her to recover, and I cling to every sign that she might. She has woken up. She has tried to write messages on a clipboard. She has used hand signals and sipped water. She is very much alive at this moment, and she still has a chance. But I am not just her daughter. I am also a surgeon, armed with too much medical knowledge. It gets in the way of my ability to hope.

I replay the previous five years, from the moment of my mother's diagnosis to the present. I second guess myself, wondering if she should have had the operation sooner. There might have been some way to avoid where we are now.

But where would we be instead?

Like everyone else in this situation, I have had to learn the difficult truth. We don't get to script these endings. We make the best decisions we can with whatever information we have, but, in the end, death chooses its own time and circumstance, as it has done with my mother. It leaves us with questions, doubts, and what ifs. All we can do is hang on for the wild and blistering ride and learn to live with the questions.