A two hundredth anniversary retelling of the Trafalgar battle profiles Horatio Nelson as a leader with a fierce sense of honor and duty who embodied a particular skill for inspiring love in others, in an account that draws on a range of sources to examine the ambitions, fears, and principles that contributed to the British Mediterranean fleet's victory. By the author of Seamanship.

NPR stories about Seize the Fire 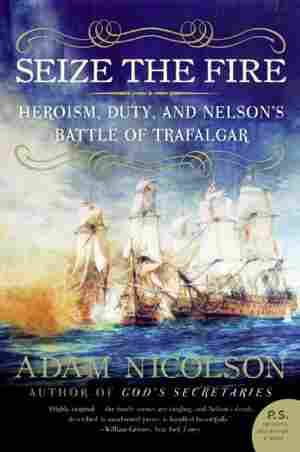 August 22, 2011 • Two hundred years ago this summer, England entered its Regency period. Many associate the era with Colin Firth's turn as Mr. Darcy, but it was also a time of political uncertainty. To celebrate the period's 200th anniversary, author Stephanie Barron suggests three books that put Mr. Firth to shame. 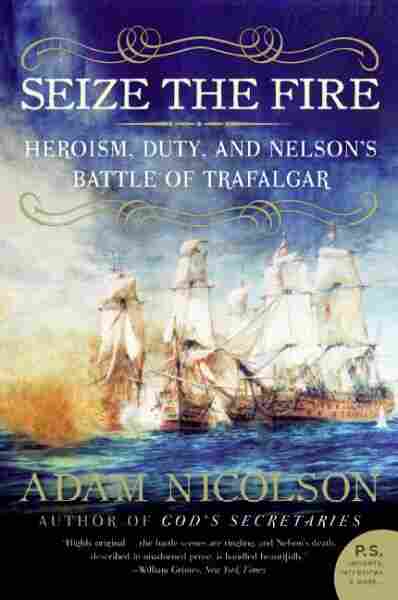 At 5.50 on the morning of 21 October 1805, just as dawnwas coming up, the look-outs high on the mainmasts ofthe British fleet spied the enemy, about twelve miles awaydownwind. They had been tracking them for a day anda night, the body of their force kept carefully over thehorizon, not only to prevent the French and Spanish takingfright and running from battle, but to remain upwind,'keeping the weather gage', holding the trump card withwhich they would control and direct the battle to come.All night long, British frigates, stationed between the twofleets, had been burning pairs of blue lights, every hour onthe hour, as pre-arranged. It was the agreed signal that theenemy was standing to the south, just as was wanted,straight into the jaws of the British guns.

Twenty minutes after the first sighting in the light ofdawn, Nelson signalled to the fleet: 'Form order of sailing in two columns.' This was the attack formation in whichhe had instructed his captains over the preceding weeks.His next signal, at 06.22, confirmed what they all knewwas inevitable: 'Prepare for battle'. Twenty minutes afterthat, the French frigate Hermione, standing out to the westof her own battle fleet, peering into the dark of the retreatingnight, signalled to her flagship, the Bucentaure: 'Theenemy in sight to windward.' For all 47,000 men afloat thatmorning, it felt like a day of destiny and decision. Mostships in both fleets were already cleared for action.

The French and Spanish were about twelve miles and theBritish about twenty-two miles off the coast of southwestSpain. The nearest point was Cape Trafalgar, an Arabicname, meaning the Point of the Cave, Taraf-al-Ghar. Fromthe very top, the truck, of the highest masts in the Britishfleet, two hundred feet above the sea, you could just makeout the blue smoky hills standing inland towards Seville.The wind was a light northwesterly, perhaps no morethan Force 2 or 3, blowing at about 10 knots, but that wasenough. A man-of-war would sail with a breeze so slightit could just be felt on the windward side of a licked finger.On the day of the battle, only the very largest ship, thevast Spanish four-decker, the Santísima Trinidad, did notrespond to her helm. Most had just enough steerage way tomanoeuvre. The sky was a pale, Neapolitan blue, with a fewhigh clouds, and it was warm for the autumn. By midday,the Spanish meteorologists, recording the temperature inthe Royal Observatory just outside Cadiz, would log 21°Celsius, about 70° Fahrenheit. In all ships in both fleets, menwould strip to the waist. There was only one ominouselement to the weather: a long, stirring swell was pushing infrom the southwest, 'the dog before its master', the sign of abig Atlantic storm to come.

Twenty-six British ships-of-the-line were bearing downfrom to-windward. One more, the Africa, captained by Henry Digby, the richest man in the English fleet, who hadwon for himself £60,000 of prize money by the time hewas thirty, perhaps £3-4 million in modern terms, hadmissed Nelson's signal in the night, had got out of positionand was now coming down from the north. The main bodyof the fleet was arranged a little raggedly, in two roughcolumns, 'scrambling into action' as one of the Britishcaptains described it afterwards, 'in coveys' as a Spaniardremembered it, as though the British fleet were a flock ofpartridges drifting in from the western horizon.

Nelson was already on the quarterdeck of Victory, aslight, grey-haired 47-year-old man, alert, wiry, anxious andintense, five feet four inches tall and irresistibly captivatingin manner. Before battle, the remains of the arm he had lostin a catastrophic fight against the Spanish in the Canarieseight years before tended to quiver with the tension. 'Myfin' he called it, and on his chairs he had a small patchparticularly upholstered on the right arm, where he couldrest this anxious stump. Like most naval officers, he wasboth tanned — the word used by unfriendly landlubbers todescribe captains and admirals in Jane Austen's Persuasionis 'orange' — and prematurely aged, worn out by the worryand fretfulness of his life. At regular intervals, he would bestruck, quite unexpectedly, by a terrifying and debilitatingnervous spasm, his body releasing, in a surge of uncontrolledenergy, the anxiety it had accumulated day by day.Only three weeks before Trafalgar, one such attack, suddenlycoming on at four in the morning, had left him feelingenervated and confused. 'I was hardly ever better thanyesterday,' he wrote to his lover Emma Hamilton,

and I slept uncommonly well; but was awoke withthis disorder. The good people of England will notbelieve that rest of body and mind is necessary forme! But perhaps this spasm may not come again these six months. I had been writing seven hoursyesterday; perhaps that had some hand in bringing itupon me.

The burden of work was unremitting. Drawings of thecabins of naval commanders of this period show pile on pileof papers, logbooks, files, notebooks, charts, musterbooks,and orderbooks. It was a navy that ran on paper ...