When terrorists seize hostages at an embassy party, an unlikely assortment of people is thrown together, including American opera star Roxane Coss, and Mr. Hosokawa, a Japanese CEO and her biggest fan.

August 11, 2008 • Set over a period of 24 hours, Run explores themes of family, race and identity. The book is Patchett's first novel since the acclaimed Bel Canto.

April 29, 2002 • Susan Stamberg talks to soprano Renee Fleming and novelist Ann Patchett about the relationship between musical inspiration and the literary imagination. Fleming and Patchett will appear tonight at Lincoln Center in New York for a discussion, The Art of Bel Canto in Song and Word. Patchett's novel, Bel Canto, was inspired in part by Fleming. 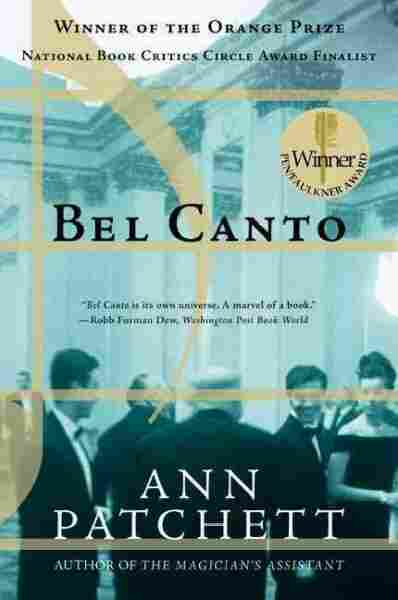 When the lights went off the accompanist kissed her. Maybe he had been turning towards her just before it was completely dark, maybe he was lifting his hands. There must have been some movement, a gesture, because every person in the living room would later remember a kiss. They did not see a kiss, that would have been impossible. The darkness that came on them was startling and complete. Not only was everyone there certain of a kiss, they claimed they could identify the type of kiss: it was strong and passionate, and it took her by surprise. They were all looking right at her when the lights went out. They were still applauding, each on his or her feet, still in the fullest throes of hands slapping together, elbows up. Not one person had come anywhere close to tiring. The Italians and the French were yelling, "Brava! Brava!" and the Japanese turned away from them. Would he have kissed her like that had the room been lit? Was his mind so full of her that in the very instant of darkness he reached for her, did he think so quickly? Or was it that they wanted her too, all of the men and women in the room, and so they imagined it collectively. They were so taken by the beauty of her voice that they wanted to cover her mouth with their mouth, drink in. Maybe music could be transferred, devoured, owned. What would it mean to kiss the lips that had held such a sound?

Some of them had loved her for years. They had every recording she had ever made. They kept a notebook and wrote down every place they had seen her, listing the music, the names of the cast, the conductor. There were others there that night who had not heard her name, who would have said, if asked, that opera was a collection of nonsensical cat screechings, that they would much rather pass three hours in a dentist's chair. These were the ones who wept openly now, the ones who had been so mistaken.

No one was frightened of the darkness. They barely noticed. They kept applauding. The people who lived in other countries assumed that things like this must happen here all the time. Lights go on, go off. People from the host country knew it to be true. Besides, the timing of the electrical failure seemed dramatic and perfectly correct, as if the lights had said, You have no need for sight. Listen. What no one stopped to think about was why the candles on every table went out as well, perhaps at that very moment or the moment before. The room was filled with the pleasant smell of candles just snuffed, a smoke that was sweet and wholly unthreatening. A smell that meant it was late now, time to go to bed.

They continued the applause. They assumed she continued her kiss.

Roxane Coss, lyric soprano, was the only reason Mr. Hosokawa had come to this country. Mr. Hosokawa was the reason everyone else had come to the party. It was not the kind of place one was likely to visit. The reason the host country (a poor country) was throwing a birthday party of unreasonable expense for a foreigner who had to be all but bribed into attending was that this foreigner was the founder and chairman of Nansei, the largest electronics corporation in Japan. It was the fondest wish of the host country that Mr. Hosokawa would smile on them, help them in some of the hundred different ways they needed helping. That could be achieved through training or trade. A factory (and this was the dream so dear its name could hardly be spoken) could be built here, where cheap labor could mean a profit for everyone involved. Industry could move the economy away from the farming of coca leaves and blackhearted poppies, creating the illusion of a country moving away from the base matter of cocaine and heroin, so as to promote foreign aid and make trafficking of those very drugs less conspicuous. But the plan had never taken root in the past, as the Japanese, by nature, erred on the side of caution. They believed in the danger and the rumors of danger countries such as this presented, so to have Mr. Hosokawa himself, not an executive vice president, not a politician, come and sit at the table was proof that a hand might be extended. And maybe that hand would have to be coaxed and begged. Maybe it would have to be pulled from its own deep pocket. But this visit, with its glorious birthday dinner replete with opera star, with several meetings planned and trips to possible factory sites tomorrow, was a full world closer than they had ever come before and the air in the room was sugared with promise. Representatives from more than a dozen countries who had been misled as to the nature of Mr. Hosokawa's intentions were present at the party, investors and ambassadors who might not encourage their governments to put a dime into the host country but would certainly support Nansei's every endeavor, now circled the room in black tie and evening gown, making toasts and laughing.

As far as Mr. Hosokawa was concerned, his trip was not for the purposes of business, diplomacy, or a friendship with the President, as later would be reported. Mr. Hosokawa disliked travel and did not know the President. He had made his intentions, or lack of intentions, abundantly clear. He did not plan to build a plant. He would never have agreed to a trip to a strange country to celebrate his birthday with people he did not know. He was not much for celebrating his birthday with people he did know, and certainly not his fifty-third, which he considered to be a number entirely without note. He had turned down half a dozen strong requests from...