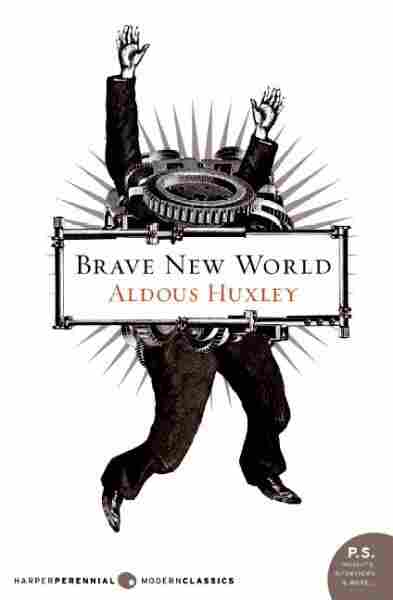 A squat grey building of only thirty-four stories. Over the main entrancethe words, Central London Hatchery and ConditioningCentre, and, in a shield, the World State's motto,Community, Identity, Stability.

The enormous room on the ground floor faced towards thenorth. Cold for all the summer beyond the panes, for all the tropicalheat of the room itself, a harsh thin light glared through the windows,hungrily seeking some draped lay figure, some pallid shape ofacademic goose-flesh, but finding only the glass and nickel andbleakly shining porcelain of a laboratory. Wintriness responded towintriness. The overalls of the workers were white, their handsgloved with a pale corpse-coloured rubber. The light was frozen,dead, a ghost. Only from the yellow barrels of the microscopes did itborrow a certain rich and living substance, lying along the polishedtubes like butter, streak after luscious streak in long recession downthe work tables.

"And this," said the Director opening the door, "is the FertilizingRoom."

Bent over their instruments, three hundred Fertilizers wereplunged, as the Director of Hatcheries and Conditioning enteredthe room, in the scarcely breathing silence, the absent-minded, so-liloquizing hum or whistle, of absorbed concentration. A troop ofnewly arrived students, very young, pink and callow, followed nervously,rather abjectly, at the Director's heels. Each of them carried anotebook, in which, whenever the great man spoke, he desperatelyscribbled. Straight from the horse's mouth. It was a rare privilege.The D.H.C. for Central London always made a point of personallyconducting his new students round the various departments.

"Just to give you a general idea," he would explain to them. Forof course some sort of general idea they must have, if they were todo their work intelligently—though as little of one, if they were tobe good and happy members of society, as possible. For particulars,as every one knows, make for virtue and happiness; generalities areintellectually necessary evils. Not philosophers but fretsawyers andstamp collectors compose the backbone of society.

"Tomorrow," he would add, smiling at them with a slightlymenacing geniality, "you'll be settling down to serious work. Youwon't have time for generalities. Meanwhile ... "

Meanwhile, it was a privilege. Straight from the horse's mouthinto the notebook. The boys scribbled like mad.

Tall and rather thin but upright, the Director advanced into theroom. He had a long chin and big rather prominent teeth, just covered,when he was not talking, by his full, floridly curved lips. Old,young? Thirty? Fifty? Fifty-five? It was hard to say. And anyhow thequestion didn't arise; in this year of stability, a.f. 632, it didn't occurto you to ask it.

"I shall begin at the beginning," said the D.H.C. and the morezealous students recorded his intention in their notebooks: Begin atthe beginning. "These," he waved his hand, "are the incubators." Andopening an insulated door he showed them racks upon racks ofnumbered test-tubes. "The week's supply of ova. Kept," he explained,"at blood heat; whereas the male gametes," and here heopened another door, "they have to be kept at thirty-five instead ofthirty-seven. Full blood heat sterilizes." Rams wrapped in theremogenebeget no lambs.

Still leaning against the incubators he gave them, while the pencilsscurried illegibly across the pages, a brief description of themodern fertilizing process; spoke first, of course, of its surgical introduction-- "the operation undergone voluntarily for the good ofSociety, not to mention the fact that it carries a bonus amounting tosix months' salary"; continued with some account of the techniquefor preserving the excised ovary alive and actively developing;passed on to a consideration of optimum temperature, salinity, viscosity;referred to the liquor in which the detached and ripened eggswere kept; and, leading his charges to the work tables, actuallyshowed them how this liquor was drawn off from the test-tubes;how it was let out drop by drop onto the specially warmed slides ofthe microscopes; how the eggs which it contained were inspectedfor abnormalities, counted and transferred to a porous receptacle;how (and he now took them to watch the operation) this receptaclewas immersed in a warm bouillon containing free-swimming spermatozoa-- at a minimum concentration of one hundred thousandper cubic centimetre, he insisted; and how, after ten minutes, thecontainer was lifted out of the liquor and its contents reexamined;how, if any of the eggs remained unfertilized, it was again immersed,and, if necessary, yet again; how the fertilized ova went back to theincubators; where the Alphas and Betas remained until definitelybottled; while the Gammas, Deltas and Epsilons were brought outagain, after only thirty-six hours, to unde rgo Bokanovsky's Process.

"Bokanovsky's Process," repeated the Director, and the studentsunderlined the words in their little notebooks.

One egg, one embryo, one adult—normality. But a bokanovskifiedegg will bud, will proliferate, will divide. From eight to ninetysixbuds, and every bud will grow into a perfectly formed embryo,and every embryo into a full-sized adult. Making ninety-six humanbeings grow where only one grew before. Progress.

"Essentially," the D.H.C. concluded, "bokanovskification consistsof a series of arrests of development. We check the normalgrowth and, paradoxically enough, the egg responds by budding."

Responds by budding. The pencils were busy.

He pointed. On a very slowly moving band a rack-full of testtubeswas entering a large metal box, another rack-full was emerging.Machinery faintly purred. It took eight minutes for the tubes togo through, he told them. Eight minutes of hard X-rays being aboutas much as an egg can stand. A few died; of the rest, the least susceptibledivided into two; most put out four buds; some eight; all werereturned to the incubators, where the buds began to develop; then,after two days, were suddenly chilled, chilled and checked ...