Miller's 1959 novel follows the Monks of the Order of St. Leibowitz as they attempt to preserve the remnants of civilization after a nuclear war.

NPR stories about A Canticle for Leibowitz

Excerpt: A Canticle For Leibowitz 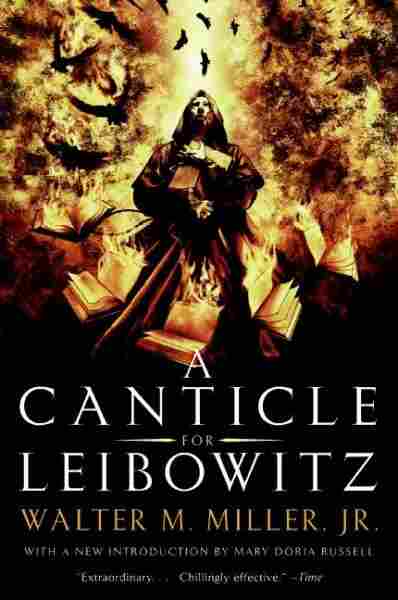 Brother Francis Gerard of Utah might never have discovered the blessed documents, had it not been for the pilgrim with girded loins who appeared during that young novice's Lenten fast in the desert.

Never before had Brother Francis actually seen a pilgrim with girded loins, but that this one was the bona fide article he was convinced as soon as he had recovered from the spine-chilling effect of the pilgrim's advent on the far horizon, as a wiggling iota of black caught in a shimmering haze of heat. Legless, but wearing a tiny head, the iota materialized out of the mirror glaze on the broken roadway and seemed more to writhe than to walk into view, causing Brother Francis to clutch the crucifix of his rosary and mutter an Ave or two. The iota suggested a tiny apparition spawned by the heat demons who tortured the land at high noon, when any creature capable of motion on the desert (except the buzzards and a few monastic hermits such as Francis) lay motionless in its burrow or hid beneath a rock from the ferocity of the sun. Only a thing monstrous, a thing preternatural, or a thing with addled wits would hike purposefully down the trail at noon this way.

Brother Francis added a hasty prayer to Saint Raul the Cyclopean, patron of the misborn, for protection against the Saint's unhappy protégés. (For who did not then know that there were monsters in the earth in those days? That which was born alive was, by the law of the Church and the law of Nature, suffered to live, and helped to maturity if possible, by those who had begotten it. The law was not always obeyed, but it was obeyed with sufficient frequency to sustaina scattered population of adult monsters, who often chose the remotest of deserted lands for their wanderings, where they prowled by night around the fires of prairie travelers.) But at last the iota squirmed its way out of the heat risers and into clear air, where it manifestly became a distant pilgrim; Brother Francis released the crucifix with a small Amen.

The pilgrim was a spindly old fellow with a staff, a basket hat, a brushy beard, and a waterskin slung over one shoulder. He was chewing and spitting with too much relish to be an apparition, and he seemed too frail and lame to be a successful practitioner of ogreism or highwaymanship. Nevertheless, Francis slunk quietly out of the pilgrim's line of sight and crouched behind a heap of rubbled stone where he could watch without being seen. Encounters between strangers in the desert, while rare, were occasions of mutual suspicion, and marked by initial preparations on both sides for an incident that might prove either cordial or warlike.

Seldom more than thrice annually did any layman or stranger travel the old road that passed the abbey, in spite of the oasis which permitted that abbey's existence and which would have made the monastery a natural inn for wayfarers if the road were not a road from nowhere, leading nowhere, in terms of the modes of travel in those times. Perhaps, in earlier ages, the road had been a portion of the shortest route from the Great Salt Lake to Old El Paso; south of the abbey it intersected a similar strip of broken stone that stretched east- and westward. The crossing was worn by time, but not by Man, of late.

The pilgrim approached within hailing distance, but the novice stayed behind his mound of rubble. The pilgrim's loins were truly girded with a piece of dirty burlap, his only clothing except for hat and sandals. Doggedly he plodded ahead with a mechanical limp while assisting his crippled leg with the heavy staff. His rhythmic gait was that of a man with a long road behind him and a long way yet to go. But, upon entering the area of the ancient ruins, he broke his stride and paused to reconnoiter.

There was no shade amid the cluster of mounds where a group of age-old buildings once had been, but some of the larger stones could, nevertheless, provide cooling refreshment to select portions of the anatomy for travelers as wise in the way of the desert as the pilgrim soon proved himself to be. He searched briefly for a rock of suitable proportions. Approvingly, Brother Francis noted that he did not grasp the stone and rashly tug, but instead, stood at a safe distance from it and, using his staff as a lever and a smaller rock for a fulcrum, he jostled the weightier one until the inevitable buzzing creature crawled forth from below. Dispassionately the traveler killed the snake with his staff and flipped the still-wriggling carcass aside. Having dispatched the occupant of the cool cranny beneath the stone, the pilgrim availed himself of the cool cranny's ceiling by the usual method of overturning the stone. Thereupon, he pulled up the back of his loincloth, sat with his withered buttocks against the stone's relatively chilly underside, kicked off his sandals, and pressed the soles of his feet against what had been the sandy floor of the cool cranny. Thus refreshed, he wiggled his toes, smiled toothlessly and began to hum a tune. Soon he was singing a kind of crooning chant in a dialect not known to the novice. Weary of crouching, Brother Francis shifted restlessly.

While he sang, the pilgrim unwrapped a biscuit and a bit of cheese. Then his singing paused, and he stood for a moment to cry out softly in the vernacular of the region: "Blest be Adonoi Elohim, King of All, who maketh bread to spring forth from the earth," in a sort of nasal bleat. The bleat being finished, he sat again, and commenced eating.

The wanderer had come a long way indeed, thought Brother Francis, who knew of no adjacent realm governed by a monarch with such an unfamiliar name and such strange pretensions. . . .