The winner of a 1990 Hugo Award follows seven pilgrims on a voyage to the world of Hyperion — dominated by the all-powerful creature, the Shrike — where they hope to learn the secret that will save humanity. The first book in the Hyperion Cantos. 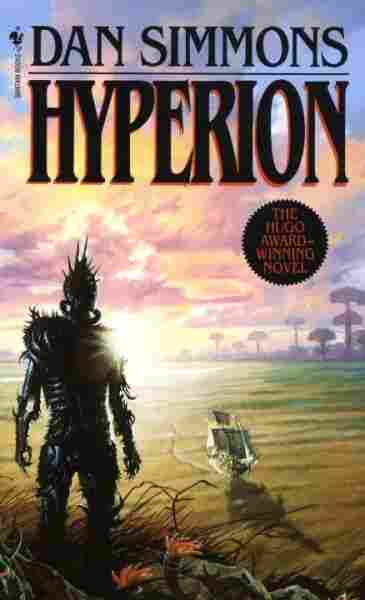 The Hegemony Consul sat on the balcony of his ebony spaceship and played Rachmaninoff's
Prelude in C-sharp Minor on an ancient but well-maintained Steinway while great, green,
saurian things surged and bellowed in the swamps below. A thunderstorm was brewing to the
north. Bruise-black clouds silhouetted a forest 0f giant gymnosperms while stratocumulus
towered nine kilometers high in a violent sky. Lightning rippled along the horizon. Closer to the
ship, occasional vague, reptilian shapes would blunder into the interdiction field, cry out, and
then brash away through indigo mists. The Consul concentrated on a difficult section of the
Prelude and ignored the approach of storm and nightfall.

The Consul stopped, fingers hovering above the keyboard, and listened. Thunder rumbled
through the heavy air. From the direction of the gymnosperm forest there came the mournful
ululation of a carrion-breed pack. Somewhere in the darkness below, a smallbrained beast
trumpeted its answering challenge and fell quiet. The interdiction field added its sonic
undertones to the sudden silence. The fatline chimed again.

"Damn," said the Consul and went in to answer it.

While the computer took a few seconds to convert and decode the burst of decaying tachyons, the
Consul poured himself a glass of Scotch. He settled into the cushions of the projection pit just as
the diskey blinked green. "Play," he said.

'You have been chosen to return to Hyperion," came a woman's husky voice. Full visuals had not
yet formed; the air remained empty except for the pulse of transmission codes which told the
Consul that this fatline squirt had originated on the Hegemony administralive world of Tau Ceti Center.
The Consul did not need the transmission coordinates to know this. The aged but still beautiful
voice of Meina Gladstone was unmistakable. "You have been chosen to return to Hyperion as a
member of the Shrike Pilgrimage," contin-ued the voice.

The hell you say, thought the Consul and rose to leave the pit.

"You and six others have been selected by the Church of the Shrike and confirmed by the All
Thing," said Meina Gladstone. "It is in the interest of the Hegemony that you accept."

The consul stood motionless in the pit, his back to the flickering transmission codes. Without
turning, he raised his glass and drained the last of the Scotch.

"The situation is very confused," said Meina Gladstone. Her voice was weary. "The consulate and
Home Rule Council fàtlined us three standard weeks ago with the news that the Time Tombs
showed signs of opening. The anti-entropic fields around them were expanding rapidly and the
Shrike has begun ranging as far south as the Bridle Range."

The Consul turned and dropped into the cushions. A holo had formed of Meina Gladstone's ancient
face. Her eyes looked as tired as her voice sounded.

"A FORCE:space task force was immediately dispatched from Parvati to evacuate the Hegemony
citizens on Hyperion before the Time Tombs open. Their time-debt will be a lithe more than
three 1-lyperion years." Meina Gladstone paused. The Consul thought he had never seen the
Senate CEO look so grim. "We do not know if the evacuation fleet will arrive in time," she said,
"but the situation is even more complicated. An Ouster migration cluster of at least four
thousand . . . units ... has been detected approaching the Hyperion system. Our evacuation task
force should arrive only a short while before the Ousters."

The Consul understood Gladstone's hesitation. An Ouster migration cluster might consist of ships ranging in size from single-person ramscouts to can cities and comet forts holding tens of thousands of the interstellar barbarians.

"The FORCE joint chiefs believe that this is the Ousters' big push," said Meina Gladstone. The
ship's computer had positioned the holo so that the woman's sad brown eyes seemed to be staring
directly at the Consul. "Whether they seek to control just I-Iyperion for the Time Tombs or
whether this is an all-out attack on the Woridweb remains to be seen. In the meantime, a full
FORCE:space battle fleet complete with a farcaster construction battalion has spun up from the
Camn System to join the evacuation task force, but this fleet may be recalled depending upon
circumstances."

The Consul nodded and absently raised the Scotch to his lips. He frowned at the empty glass and
dropped it onto the thick carpeting of the holopit. Even with no military training he understood
the difficult tactical decision Gladstone and the joint chiefs were faced with. Unless a military
farcaster were hurriedly constructed in the Hyperion system-at staggering expense-there
would be no way to resist the Ouster invasion. Whatever secrets the Time Tombs might hold
would go to the Hegemony's enemy. If the fleet did construct a farcaster in time and the
Hegemony committed the total resources of FORCE to defending the single, distant, colonial world
of Hyperion, the Worldweb ran the terrible risk of suffering an Ouster attack elsewhere on the
perimeter, or-in a worst-case scenariohaving the barbarians actually seizing the farcaster and
penetrating the Web itself. The Consul fried to imagine the reality of armored Ouster troops
stepping through farcaster portals into the undefended home cities on a hundred worlds.

The Consul walked through the holo of Meina Gladstone, retrieved his glass, and went to pour
another Scotch.

"You have been chosen to join the pilgrimage to the Shrike," said the image of the old CEO whom
the press loved to compare to Lincoln or Churchill or Alvarez-Temp or whatever other
preHegira legend was in historical vogue at the time. "The Templars are sending their treeship
Ydrasi1I," said Gladstone, "and the evacuation task force commander has instructions to let it
pass. With a three-week time-debt, you can rendezvous with the Yggdrasill before it goes
quantum from the Parvati system. The six other pilgrims chosen by the Shrike Church will be
aboard the treeship. Our intelligence reports suggest that at least one of the seven pilgrims is an agent of the Ousters. We
do not . at this time - . have any way of knowing which one it is"

The Consul had to smile. Among all the other risks Gladstone was taking, the 01d woman had to
consider the possibility that he was the spy and that she was fatlining crucial information to an
Ouster agent. Or had she given him any crucial information? The fleet movements were
detectable as soon as the ships used their Hawking drives, and if the Consul were the spy, the
CEO's revelation might be a way to scare him off. The Consul's smile faded and he drank his
Scotch.

"Sol Weintraub and Fedmahn Kassad are among the seven pilgrims chosen," said Gladstone.

The Consul's frown deepened. He stared at the cloud of digits flickering like dust motes around
the 01d woman's image. Fifteen seconds of fatline transmission time remained.

"We need your help," said Meina Gladstone. "It is essential that the secrets of the Time Tombs
and the Shrike be uncovered. This pilgrimage may be our last chance. If the Ousters conquer
Hyperion, their agent must be eliminated and the Time Tombs sealed at all cost. The fate of the
Hegemony may depend upon it."

The transmission ended except for the pulse of rendezvous coordinates. "Response?" asked the
ship's computer. Despite the tremendous energies involved, the spacecraft was capable of
placing a brief, coded squirt into the incessant babble of FTL bursts which tied the human
portions of the galaxy together.

"No," said the Consul and went outside to lean on the balcony

railing. Night had fallen and the clouds were low. No stars were visible. The darkness would
have been absolute except for the intermittent flash of lightning to the north and a soft
phosphorescence rising from the marshes. The Consul was suddenly very aware that he was, at
that second, the only sentient being on an unnamed world. He listened to the antediluvian night
sounds rising from the

swamps and he thought about morning, about setting out in the

Vikken EMV at first light, about spending the day in sunshine,

returning to the ship in the evening for a good steak and a cold beer.

The Consul thought about the sharp pleasure of the hunt and the equally sharp solace of solitude:
solitude he had earned through the pain and nightmare he had already suffered on l-lyperion.

The Consul went inside, brought the balcony in, and sealed the ship just as the first heavy
raindrops began to fall. He climbed the spiral staircase to his sleeping cabin at the apex of the
ship. The circular room was dark except for silent explosions of lightning which outlined
rivulets of rain coursing the skylight. The Consul stripped, lay back on the firm mattress, and
switched on the sound system and external audio pickups. He listened as the fury of the storm
blended with the violence of Wagner's "Flight of the Valkyries." Hurricane winds buffeted the
ship. The sound of thunderclaps filled the room as the skylight flashed white, leaving
afterimages burning in the Consul's retinas.

Wagner is good only for thunderstorms, he thought. He closed his eyes but the lightning was
visible through closed eyelids. He remembered the glint of ice crystals blowing through the
tumbled ruins on the low hills near the Time Tombs and the colder gleam of steel on the Shrike's
impossible free of metal thorns. He remembered screams in the night and the hundred-facet,
ruby-and-blood gaze of the Shrike itself.

The Consul silently commanded the computer to shut off all speakers and raised his wrist to
cover his eyes. In the sudden silence he lay thinking about how insane it would be to return to
Hyperion' During his eleven years as Consul on that distant and enigmati world, the mysterious
Church of the Shrike had allowed a dozen barges of offworld pilgrims to depart for the windswept barrens, around the Time Tombs, north
of the mountains. No one had returned. And that had been in normal times, when the Shrike had
been prisoner to the tides of time and forces no one understood, and theanti-entropic fields had
been contained to a fewdozen meters" around the Time Tombs. And there had been no threat of air
Ouster invasion.

The Consul thought of the Shrike, free to wander everywhere on, Hyperion, of the millions of
indigenies and thousands of Hegemony citizens helpless before a creature which defied physical laws and which communicated only
through death, and he shivered despite the warmth of the cabin.

The night and storm passed. Another stormfront raced ahead of the approaching dawn.
Gymnosperms two hundred meters tall bent and whipped before the coming torrent. Just before
first light, the Consul's ebony spaceship rose on a tail of blue plasma and punched through
thickening clouds as it climbed toward space and rendezvous.