A Novel of Discworld

Sentenced to death for forgery and swindling, Moist von Lipwig accepts an offer of a pardon in exchange for revamping an ancient post office, but his efforts are thwarted by tons of undelivered mail, an 18,000-year-old ghost postman, his shoe-wielding new girlfriend, and murderous characters who want the post office shut down. 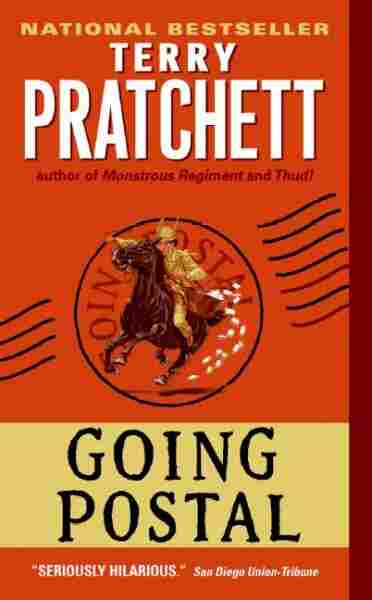 They say that the prospect of being hanged in the morningconcentrates a man’s mind wonderfully; unfortunately, whatthe mind inevitably concentrates on is that, in the morning, it willbe in a body that is going to be hanged.The man going to be hanged had beennamed Moist von Lipwig by dotingif unwise parents, but he wasnot going to embarrass thename, insofar as that was stillpossible, by being hung under it.To the world in general, and particularlyon that bit of it known asthe death warrant, he was AlfredSpangler.

And he took a more positive approach to the situation and hadconcentrated his mind on the prospect of not being hanged in themorning, and, most particularly, on the prospect of removing allthe crumbling mortar from around a stone in his cell wall with aspoon. So far the work had taken him five weeks and reduced thespoon to something like a nail file. Fortunately, no one ever cameto change the bedding here, or else they would have discovered theworld’s heaviest mattress.

It was a large and heavy stone that was currently the object ofhis attentions, and, at some point, a huge staple had been hammeredinto it as an anchor for manacles.Moist sat down facing the wall, gripped the iron ring in bothhands, braced his legs against the stones on either side, andheaved.

His shoulders caught fire, and a red mist filled his vision, butthe block slid out with a faint and inappropriate tinkling noise.Moist managed to ease it away from the hole and peered inside.At the far end was another block, and the mortar around itlooked suspiciously strong and fresh.

Just in front of it was a new spoon. It was shiny.As he studied it, he heard the clapping behind him. He turnedhis head, tendons twanging a little riff of agony, and saw several ofthe wardens watching him through the bars.

“Well done, Mr. Spangler!” said one of them. “Ron here owes mefive dollars! I told him you were a sticker! ‘He’s a sticker,’ I said!”

“You set this up, did you, Mr.Wilkinson?” said Moist weakly,watching the glint of light on the spoon.

“Oh, not us, sir. Lord Vetinari’s orders. He insists that all condemnedprisoners should be offered the prospect of freedom.”

“Freedom? But there’s a damn great stone through there!”

“I suppose so, yes,” said Moist. He didn’t say “you bastards.” The wardens had treated him quite civilly these past six weeks, andhe made a point of getting on with people. He was very, very goodat it. People skills were part of his stock-in-trade; they were nearlythe whole of it.

Besides, these people had big sticks. So, speaking carefully, headded: “Some people might consider this cruel, Mr.Wilkinson.”“Yes, sir, we asked him about that, sir, but he said no, it wasn’t.He said it provided”—his forehead wrinkled—“occ-you-pay-shunallther-rap-py, healthy exercise, prevented moping, and offeredthat greatest of all treasures, which is Hope, sir.”

“Upset? Why should I be upset, Mr.Wilkinson?”

“Only the last bloke we had in this cell, he managed to getdown that drain, sir. Very small man. Very agile.”

Moist looked at the little grid in the floor. He’d dismissed itout of hand.

“Does it lead to the river?” he said.

The warden grinned. “You’d think so, wouldn’t you? He wasreally upset when we fished him out. Nice to see you’ve enteredinto the spirit of the thing, sir. You’ve been an example to all of us,sir, the way you kept going. Stuffing all the dust in your mattress?Very clever, very tidy. Very neat. It’s really cheered us up, havingyou in here. By the way, Mrs.Wilkinson says thanks very much forthe fruit basket. Very posh, it is. It’s got kumquats, even!”

“The warden was a bit green about the kumquats, ’cos he onlygot dates in his, but I told him, sir, that fruit baskets is like life—until you’ve got the pineapple off of the top you never know what’sunderneath. He says thank you, too.”

“Glad he liked it, Mr.Wilkinson,” said Moist absentmindedly.Several of his former landladies had brought in presents for “thepoor, confused boy,” and Moist always invested in generosity. Acareer like his was all about style, after all.

“On that general subject, sir,” said Mr.Wilkinson, “me and thelads were wondering if you might like to unburden yourself, at thispoint in time, on the subject of the whereabouts of the place wherethe location of the spot is where, not to beat about the bush, youhid all that money you stole . . . ?”

The jail went silent. Even the cockroaches were listening.“No, I couldn’t do that, Mr. Wilkinson,” said Moist loudly,after a decent pause for dramatic effect. He tapped his jacketpocket, held up a finger, and winked.

The warders grinned back.

“We understand totally, sir. Now I’d get some rest if I was you,sir, ’cos we’re hanging you in half an hour,” said Mr.Wilkinson.“Hey, don’t I get breakfast?”

“Breakfast isn’t until seven o’clock, sir,” said the warderreproachfully. “But, tell you what, I’ll do you a bacon sandwich.’Cos it’s you, Mr. Spangler.”

AND NOW IT WAS A FEW MINUTES before dawn and it washim being led down the short corridor and out into the littleroom under the scaffold. Moist realized he was looking at himselffrom a distance, as if part of himself was floating outside his body likea child’s balloon, ready, as it were, for him to let go of the string.

The room was lit by light coming through cracks in the scaffoldfloor above, and, significantly, from around the edges of thelarge trapdoor. The hinges of said door were being carefully oiledby a man in a hood.

He stopped when he saw the party had arrived and said, “Goodmorning,Mr. Spangler.” He raised the hood helpfully. “It’s me, sir,Daniel ‘One Drop’ Trooper. I am your executioner for today, sir.Don’t you worry, sir. I’ve hanged dozens of people.We’ll soon haveyou out of here.”

“Is it true that if a man isn’t hanged after three attempts he’sreprieved, Dan?” said Moist, as the executioner carefully wiped hishands on a rag.

“So I’ve heard, sir, so I’ve heard. But they don’t call me ‘OneDrop’ for nothing, sir. And will sir be having the black bag today?”“Will it help?”

“Some people think it makes them look more dashing, sir. Andit stops that pop-eyed look. It’s more a crowd thing, really. Quite abig one out there this morning. Nice piece about you in the Timesyesterday, I thought. All them people saying what a nice youngman you were, and everything. Er . . . would you mind signing therope beforehand, sir? I mean, I won’t have a chance to ask youafterwards, eh?”

“Yessir,” said the hangman. “It’s sort of traditional. There’s a lotof people out there who buy old rope. Specialist collectors, youcould say. A bit strange, but it takes all sorts, eh? Worth moresigned, of course.” He flourished a length of stout rope. “I’ve got aspecial pen that signs on rope. One signature every couple ofinches? Straightforward signature, no dedication needed. Worthmoney to me, sir. I’d be very grateful.”

“So grateful that you won’t hang me, then?” said Moist, takingthe pen.

This got an appreciative laugh. Mr. Trooper watched him signalong the length, nodding happily.

“Not me!” said Moist quickly, to another round of generalamusement.

“You’re a card,Mr. Spangler,” said Mr.Wilkinson. “It won’t bethe same without you around, and that’s the truth.”

“Not for me, at any rate,” said Moist. This was, once again,treated like rapier wit. Moist sighed.

“Do you really think all this deters crime,Mr.Trooper?” he said.

“Well, in the generality of things I’d say it’s hard to tell, giventhat it’s hard to find evidence of crimes not committed,” said thehangman, giving the trapdoor a final rattle. “But in the specificality,sir, I’d say it’s very efficacious.”

“Meaning I’ve never seen someone up here more’n once, sir.Shall we go?”

Moist stared ahead while the roll call of his crimes was readout. He couldn’t help feeling that it was so unfair. He’d never somuch as tapped someone on the head. He’d never even brokendown a door. He had picked locks on occasion, but he’d alwayslocked them again behind him. Apart from all those repossessions,bankruptcies, and sudden insolvencies, what had he actually donethat was bad, as such? He’d only been moving numbers around.

“Nice crowd turned out today,” said Mr.Trooper, tossing the endof the rope over the beam and busying himself with knots. “Lot ofpress, too. What Gallows? covers ’em all, o’course, and there’s theTimes and the Pseudopolis Herald, prob’ly because of that bank whatcollapsed there, and I heard there’s a man from the Sto Plains Dealer,too. Very good financial section, I always keep an eye on used-ropeprices. Looks like a lot of people want to see you dead, sir.”Moist was aware that a black coach had drawn up at the rear ofthe crowd. There was no coat of arms on the door, unless you were inon the secret, which was that Lord Vetinari’s coat of arms featured asable shield. Black on black. You had to admit, the bastard hadstyle—