The story of an engineer who creates a device to raise a girl capable of thinking for herself reveals what happens when a young girl of the poor underclass obtains the device.

NPR stories about The Diamond Age 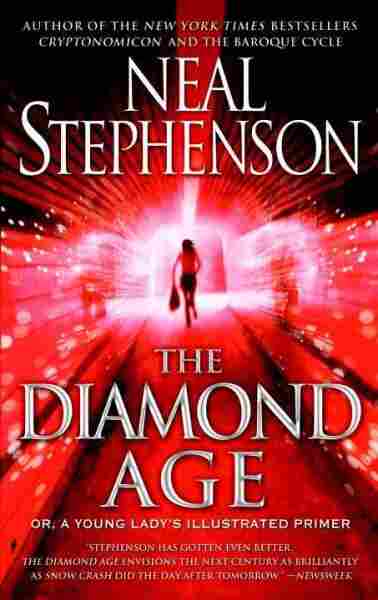 The bells of St. Mark's were ringing changes up on the mountain when Bud skated over to the mod parlor to upgrade his skull gun. Bud had a nice new pair of blades with a top speed of anywhere from a hundred to a hundred and fifty kilometers, depending on how fat you were and whether or not you wore aero. Bud liked wearing skin-tight leather, to show off his muscles. On a previous visit to the mod parlor, two years ago, he had paid to have a bunch of 'sites implanted in his muscles—little critters, too small to see or feel, that twitched Bud's muscle fibers electrically according to a program that was supposed to maximize bulk. Combined with the testosterone pump embedded in his forearm, it was like working out in a gym night and day, except you didn't have to actually do anything and you never got sweaty. The only drawback was that all the little twitches made him kind of tense and jerky. He'd gotten used to it, but it still made him a little hinky on those skates, especially when he was doing a hundred clicks an hour through a crowded street. But few people hassled Bud, even when he knocked them down in the street, and after today no one would hassle him ever again.

Bud had walked away, improbably unscratched, from his last job—with something like a thousand yuks in his pocket. He'd spent a third of it on new clothes, mostly black leather, another third of it on the blades, and was about to spend the last third at the mod parlor. You could get skull guns a lot cheaper, of course, but that would mean going over the Causeway to Shanghai and getting a back-alley job from some Coaster, and probably a nice bone infection in with the bargain, and he'd probably pick your pocket while he had you theezed. Besides, you could only get into a Shanghai if you were virgin. To cross the Causeway when you were already packing a skull gun, like Bud, you had to bribe the shit out of numerous Shanghai cops. There was no reason to economize here. Bud had a rich and boundless career ahead of him, vaulting up a hierarchy of extremely dangerous drug-related occupations for which he served as a paid audition of sorts. A start weapons system was a wise investment.

The damn bells kept ringing through the fog. Bud mumbled a command to his music system, a phased acoustical array splayed across both eardrums like the seeds on a strawberry. The volume went up but couldn't scour away the deep tones of the carillon, which resonated in his long bones. He wondered whether, as long as he was at the mod parlor, he should have the batteries drilled out of his right mastoid and replaced. Supposedly they were ten-year jobs, but he'd had them for six and he listened to music all the time, loud.

Three people were waiting. Bud took a seat and skimmed a mediatron from the coffee table; it looked exactly like a dirty, wrinkled, blank sheet of paper. " 'Annals of Self-Protection,' " he said, loud enough for everyone else in the place to hear him. The logo of his favorite meedfeed coalesced on the page. Mediaglyphics, mostly the cool animated ones, arranged themselves in a grid. Bud scanned through them until he found the one that denoted a comparison of a bunch of different stuff, and snapped at it with his fingernail. New mediaglyphics appeared, surrounding larger cine panes in which Annals staff tested several models of skull guns against live and dead targets. Bud frisbeed the mediatron back onto the table; this was the same review he'd been poring over for the last day, they hadn't updated it, his decision was still valid.

One of the guys ahead of him got a tattoo, which took about ten seconds. The other guy just wanted his skull gun reloaded, which didn't take much longer. The girl wanted a few 'sites replaced in her racting grid, mostly around her eyes, where she was starting to wrinkle up. That took a while, so Bud picked up the mediatron again and went in a ractive, his favorite, called Shut Up or Die!

The mod artist wanted to see Bud's yuks before he installed the gun, which in other surroundings might have been construed as an insult but was standard business practice here in the Leased Territories. When he was satisfied that this wasn't a stick-up, he theezed Bud's forehead with a spray gun, scalped back a flap of skin, and pushed a machine, mounted on a delicate robot arm like a dental tool, over Bud's forehead. The arm homed in automatically on the old gun, moving with alarming speed and determination. Bud, who was a little jumpy at the best of times because of his muscle stimulators, flinched a little. But the robot arm was a hundred times faster than he was and plucked out the old gun unerringly. The proprietor was watching all of this on a screen and had nothing to do except narrate: The hole in your skull's kind of rough, so the machine is reaming it out to a larger bore—okay, now here comes the new gun.

A nasty popping sensation radiated through Bud's skull when the robot arm snapped in the new model. It reminded Bud of the days of his youth, when, from time to time, one of his playmates would shoot him in the head with a BB gun. He instantly developed a low headache.

"It's loaded with a hundred rounds of popcorn," the proprietor said, "so you can test out the yuvree. Soon as you're comfortable with it, I'll load it for real." He stapled the skin of Bud's forehead back together so it'd heal invisibly. You could pay the guy extra to leave a scar there on purpose, so everyone would know you were packing, but Bud had heard that some chicks didn't like it. Bud's relationship with the female sex was governed by a gallimaufry of primal impulses, dim suppositions, deranged theories, overheard scraps of conversation, half-remembered pieces of bad advice, and fragments of no-doubt exaggerated anecdotes that amounted to rank superstition. In this case, it dictated that he should not request the scar.

Besides, he had a nice collection of Sights—not very tasteful sunglasses with crosshairs hudded into the lens on your dominant eye. They did wonders for marksmanship, and they were real obvious too, so that everyone knew you didn't fuck with a man wearing Sights.

"Give it a whirl," the guy said, and spun the chair around—it was a big old antique barber chair upholstered in swirly plastic—so Bud was facing a mannikin in the corner of the room. The mannikin had no face or hair and was speckled with little burn marks, as was the wall behind it.

"Stand by," he said, and got another answering buzz. He turned his face squarely toward the mannikin.

"Hut," he said. He said it under his breath, through unmoving lips, but the gun heard it; he felt a slight recoil tapping his head back, and a startling POP sounded from the mannikin, accompanied by a flash of light on the wall up above its head. Bud's headache deepened, but he didn't care.

"This thing runs faster ammo, so you'll have to get used to aiming a tad lower," said the guy. So Bud tried it again and this time popped the mannikin right in the neck.

"Great shot! That would have decapped him if you were using Hellfire," the guy said. "Looks to me like you know what you're doing—but there's other options too. And three magazines so you can run multiple ammos. "

"I know," Bud said, "I been checking this thing out." Then, to the gun, "Disperse ten, medium pattern." Then he said "hut" again. His head snapped back much harder, and ten POPs went off at once, all over the mannikin's body and the wall behind it. The room was getting smoky now, starting to smell like burned plastic.

"You can disperse up to a hundred," the guy said, "but the recoil'd probably break your neck."

"I think I got it down," Bud said, "so load me up. First magazine with electrostun rounds. Second magazine with Cripplers. Third with Hellfires. And get me some fucking aspirin."