The author offers a tribute to the 1960s told through a series of personal vignettes recounting his global experiences, from his final year in the military to his work as a correspondent in Vietnam, where he witnessed the invasion of Laos. 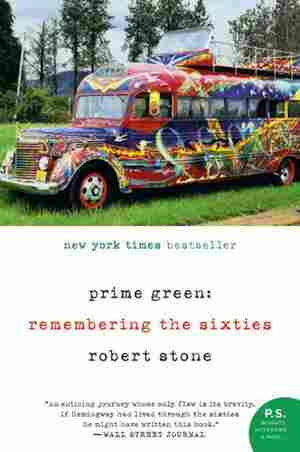 August 12, 2011 • Award-winning novelist Robert Stone hung out for many years with Ken Kesey and the Merry Pranksters. He recounts the group's cross-country road trips and experiences taking hallucinogenic drugs in his memoir, Prime Green. 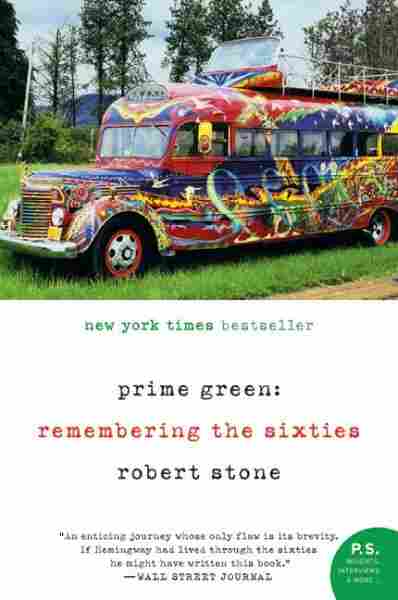 In 1958 I was on the bridge of the USS Arneb, an ungainly naval transport ship with the lines of a tramp steamer. LCVPs were stacked on hatches fore and aft under mammoth A-frames designed to raise and lower them. The Arneb had entertained kamikazes at Okinawa. Veterans of Normandy and the South Pacific ran many of the ship's divisions.

That quarter of 1957–58, spring in the Northern calendar, darkening autumn in the Southern Ocean, we had been given some kind of pass from the alerts of the cold war. UNESCO had designated 1958 as an International Geophysical Year and the Navy had patched together the Arneb as America's contibution. We were tracking electrical activity on the surface of the sun, "sunspots" in the far south of the Indian Ocean, southwest of the ghost whaling station on the Crozet Islands. On board was a team of astrophysicists from the University of Chicago. It was the last of the Antarctic expeditions mapped out by Admiral Richard Byrd and was known as Operation Deep Freeze III.

One day we were steaming on the northern edge of the ice floes at the latitude where the seasonal oscillations of the Antarctic Convergence determine the weather. The subpolar wind warmed as it quickened, the dark blue plain of ocean rising into spiky horsetails that here and there showed white. The weather in the far south, I was learning, was weird and contrary in ways that made it differ from the Arctic. April at latitude 55 offered a dark sapphire sky dappled with cirrus trails. Colors were harsh and dry, without mist. Icebergs flashed on the horizons, intensely defined yet somehow ghostly, like hallucinations.

I was at the helm, a watch where the night hours looked little different from day. The ocean glowed with the same strangely referred light. As a petty officer (my rank was officially journalist third class) I was exempt from helm watches. In fact I enjoyed them far out at sea. A watch on the helm on the open ocean involved keeping an eye on the binnacle indicator, feeling the big lumbering transport fall away under the roaring polar wind, then bringing her back on so that the needle showed the designated course. A helmsman got to know the ship and its eccentricities, its stubborn lists and rolls. If the captain or the exec had not planned some exercise for the day, it was a soothing routine.

The formalities of the bridge were vaguely liturgical: terse commands repeating ancient formulas in antique language, bells, blocks of Morse code reporting weather from the adjoining radio shack, the boatswain's whistle at the regulation times of day. There was a sense of everything seriously in place. Over and over, we located and realigned ourselves in the mathematics of the planet, forever adjusting and correcting the location of our tuck in space and time. The ocean around us stood for blue infinity. Time came to us courtesy of the Naval Observatory, sifting out across the garden fifteen thousand miles away in Washington, over which Vice President Nixon then brooded.

Also, helm watches could be traded for other, less diverting details in the ship's system of graft and barter. The duty helmsman whose watch I stood would perform some equivalent responsibility for me. With the ship far out at sea, the helmsman's sole responsibility was to keep the ship on course, so there was time for daydreaming.

For the previous month or so we had been undergoing repairs in Melbourne. In the antipodean autumn of 1958, I spent my idle hours contemplating the moves of an Australian Olympic fencer named Denise Corcoran, whom I had met by carrying her foils across Hyde Park, the one in Sydney. I had learned something from Denise, and I was still grappling with the substance of it.

Crossing Hyde Park, Denise and I found that we were both bound for Melbourne: the Arneb was going in for repairs to its evaporator system; Denise was headed for hours of swordplay in a gymnasium above the Spencer Street railroad station, preparing for the Empire Games that were due to start in Montreal in a few months.

I went often to watch her work in the dingy gym above the station, even when we had settled down together (on our free nights at least) in a mean and ugly neighborhood at the end of the line. She was tall and redheaded, which she told me was all wrong for fencers; it aroused anger and spite in opponents because you looked, as she put it, like a big gawk—people laughed. Fencers were meant to be compact and sleek, never outsized, overdone, or obvious, certainly not freckled and redheaded and slightly bucktoothed like my Denise. Nevertheless, she seemed to be their star, intimidating the other girls. Out on the ocean, in my mind's eye, I could still see how she used the long, strong, and shapely legs she complained about in unexpected lunges that ran her enemy the length of the enclosure. The fencer's costume was particularly lacking in any sort of glamour, but she could appear quite handsome and provocative, planted and prepared to strike. I liked the way the cloth of her breeches wrinkled over the taut skin at the backs of her knees. I also enjoyed her pretense to a complete absence of humor, which made her a most droll comic. She used expressions like "crikey," "fair dinkum," and "truly." A pint made her "squiffed."

Some days, if I had a twenty-four in town, I would sneak Denise early out of the gym, out from under the raptor dragon gaze of her coach. This meant making our way through the humid halls and moist saloons and beer-polished private lounges of the vast station in which around five o'clock each afternoon a state of headlong societal breakdown was under way. In those days the official bar-closing hour in the state of Victoria was 6 p.m. (It was the bloody women, blokes explained—they had the vote, they wanted the blokes home for their tea.) At the same time . . .