Accessibility links
Getting Wasted NPR coverage of Getting Wasted: Why College Students Drink Too Much and Party So Hard by Thomas Vander Ven. News, author interviews, critics' picks and more.

Why College Students Drink Too Much and Party So Hard

NPR stories about Getting Wasted 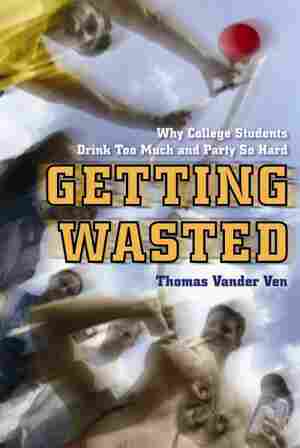 August 17, 2011 • In Getting Wasted, Ohio University professor Thomas Vander Ven asks why Americans have come to see college and drinking as synonymous.

An Introduction to College Drinking

It's 2 AM and the bars just closed. There are dozens of young men and women gathered in the gas station parking lot in the bar district. A young woman has fallen and she can't get up without help from her friends. I can't tell if she is crying or laughing. Maybe both. It's loud out here (shouting, singing). Two young men are locked up, fighting. Each one has a hold on the other's shirt front. A young woman (his girlfriend?) is trying to pull one of them away, pleading with him to stop. Young men stand near the fight watching. They are amused. Up and down the street people are walking (some staggering) in clusters of 3 to 5. No one seems to notice me, even when they almost knock me down as I take notes. This feels a little like "Night of the Living Dead." They are zombies unleashed by the bars into a world inhabited by a few sobers (me and the few cops I see out here). I wouldn't want to have to control this. I've heard students refer to the Shit Show and this is it. This is the Shit Show! (Field notes, Fall 2008)

Many college students like to get wasted, train-wrecked, obliterated, hammered, destroyed, and fucked up. The terms that university students most commonly use to describe severe alcohol intoxication share a common theme: destruction. But what is it that they are trying to destroy? Are heavy drinkers tearing down one version of their self and constructing another? Are they obliterating the boring, everyday, unproblematic world in which they live and replacing it with The Shit Show, where anything can happen? The Shit Show refers to a chaotic drinking episode characterized by dramatic drunkenness, human wreckage, and primitive behavior. It is a party train that has gone off the rails. When students refer to the Shit Show it is with equal parts disgust and delight. Yes, things got out of hand, but in an entertaining sort of way. Here, a 22 year-old male student explains the versatility of this concept:

"Something always gets broken. Somebody dropped a glass, you know, somebody knocked over a cup, somebody broke our thermostat. As the night goes on people tend to get rowdier and rowdier and guys want to get in fights. Girls want to start yelling at their boyfriends. You know, that kind of stuff, as the night goes on... the funny people get funnier, either because they're drunk or everyone else is...It's a good time, you know?"

Collective drunkenness, then, can be a mixed bag of violence, histrionics, and good times. While the Shit Show may not represent all or even most college drinking experiences, it is a useful image. The "Show" is a widescreen, amplified image of the duality of college drinking — it captures the euphoria and the frustration, the laughter and the vandalism, and the emergent affection and the rising violence of group intoxication. But the Shit Show is more than just a useful image; it lives in the scholarly research on college drinking as well. Thanks to a large body of data we know that, in general, college students drink a lot and that getting drunk is related to a variety of negative outcomes. But why do they do it? How do they accomplish drunkenness and how do they manage its ill effects? What is the function of serial alcohol intoxication? This study is an attempt to address these questions, and more.

To be fair, some university students do not drink at all and "getting wasted" does not describe all (or maybe even most) college drinking. Some drinkers are just looking for a nice "buzz," and many others claim they are "responsible" drinkers. Popular media images of the hell raising, Viking helmet-wearing fraternity lout surely do not capture the full range of alcohol users on our college campuses. But extreme intoxication and its effects are what college administrators, social critics, and parents are most concerned about. In "Binge: What Your College Student Won't Tell You," a recent book about the current college drinking culture, Barrett Seaman provides a graphic list of hazing-related drinking fatalities, tragic deaths caused by alcohol poisoning, and other stories that suggest that excessive university alcohol use has reached dangerous levels with catastrophic consequences for some students and their families. In a recent attempt to respond to this perceived "culture of dangerous, clandestine binge-drinking" on our nation's campuses, a group of university presidents circulated a petition known as the Amethyst Initiative. The initiative called for a unified effort to fight the problems generated by college drinking by lowering the drinking age. According to the authors of the initiative, "21 is not working." By 2009, over one-hundred college and university presidents had signed the petition, sparking a hostile response from activist groups, like Mothers Against Drunk Driving (MADD), who claim that raising the drinking age to 21 has saved thousands of lives. According to a MADD press release:

As students head back to school, more than 100 college and university presidents have signed on to a misguided initiative that uses deliberately misleading information to confuse the public on the effectiveness of the 21 law. The initiative is led by another organization with a political agenda of lowering the drinking age in the name of reducing college binge drinking. Mothers Against Drunk Driving (MADD) National President Laura Dean-Mooney said, "Underage and binge drinking is a tough problem and we welcome an honest discussion about how to address this challenge but that discussion must honor the science behind the 21 law which unequivocally shows that the 21 law has reduced drunk driving and underage and binge drinking." MADD, the Insurance Institute for Highway Safety (IIHS), the American Medical Association (AMA), National Transportation Safety Board (NTSB), Governors Highway Safety Association and other science, medical and public health organizations, and all members of the Support 21 Coalition call on these college and university presidents to remove their names from this list and urge them to work with the public health community and law enforcement on real solutions to underage and binge drinking. Additionally, MADD is asking the public to write letters to their Governors and college presidents to support the 21 law and ask those on the initiative list to remove their names.

The Amethyst Initiative's petition is just one example of countless strategies aimed at curbing the college drinking problem. University prevention and treatment programs have taken the form of brief motivational interventions, cognitive-behavioral skills training, feedback-based interventions, computer-administered alcohol prevention approaches, and programs aimed at college drinkers who have been caught and mandated to undergo alcohol education. In general, these attempts to reduce problem drinking behaviors have, at best, resulted in small, short-term reductions in alcohol abuse. Other highly touted programs, like "A Matter of Degree" (a systems based approach focused on the interaction between college students, drinking norms, and alcohol-related access and availability) have been credited with making only modest gains in the battle to reduce college alcohol abuse. People are getting desperate about college alcohol abuse and yet no one seems to agree on the solution.