The author of the best-selling Matterhorn offers insight into the combat experience, drawing on his background as a decorated Vietnam War veteran to raise awareness about how inadequately troops are prepared for battle-related psychological and spiritual trauma.

NPR stories about What It Is Like to Go to War 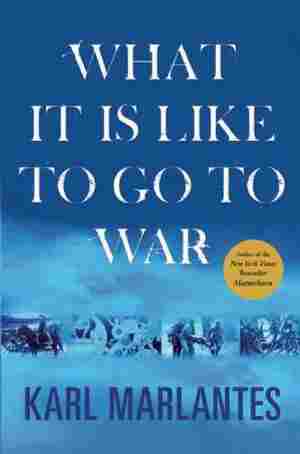 August 30, 2011 • As a Marine in the Vietnam War, Karl Marlantes learned to fire an M16, to command a platoon, to fight and to kill. In What It Is Like to Go to War, he comes to terms with the experience of combat: the guilt, the thrill and the challenge of coming home.

Excerpt: What It Is Like To Go To War

The sun had struggled all day behind monsoon clouds before finally being extinguished by the turning earth and the dark wet ridges of the Annamese Cordillera. It was February 1969, in Quang Tri province, Vietnam. Zoomer lay above my hole in monsoon-night blackness on the slick clay of Mutter's Ridge, the dark jungle-covered ridge paralleling Vietnam's demilitarized zone where the Third Marine Division and the North Vietnamese

Army had struggled together for two years. A bullet had gone through Zoomer's chest, tearing a large hole out of his back. We kept him on his side, curled against the cold drizzle, so the one good lung wouldn't fill up with blood. We were surrounded and there was no hope of evacuation, even in daylight. The choppers couldn't find us in the fog-shrouded mountains.

I heard Zoomer all night, panting as if he were running the 400, one lung doing for two and a body in shock. In and out. In, the fog, the sighing sound of monsoon wind through the jungle. Out, the hot painful breath. Zoomer had to go all night. If he slept, he'd die. So no morphine. Pain was the key to life.

To help him stay awake, and to calm my own fear, I'd crawl over to him to whisper stories.

I grew up in Oregon, where as a teenager I worked with my grandfather Axel on his i shing boat at the mouth of the Columbia River. One night in June 1959 a dull thunk startled us into alertness as a heavy body slammed into the four-football-fields-long gill net. The body's weight made the cork line, which floated on the surface and from which the net hung like a curtain, sink beneath the cold salt water. We approached the large gap in the cork line quietly, me steering the thirty-foot fishing boat in the dark, Grandpa Axel in the bow with the rifle, worried that it was a sea lion. A sea lion could destroy the net, which next to the boat itself was Grandpa's most valuable investment. My spine prickled when I saw the plated body of a seven-foot green sturgeon slowly undulating, eerie and ghostlike, beneath the dark water.

It took everything both of us had to haul the sturgeon into the boat, several hundred pounds at nine cents a pound and not much tearing of the net. Grandpa Axel was pleased. He and I heaved the sturgeon into the built-in fish box that temporarily held the salmon until we could put back in to Scandinavian Station. That was where we unloaded and weighed our catch, bobbing on the swell beneath the crane that hoisted the fish boxes up to the waiting ice, Grandpa impatient to get back to fishing, me happy to be idle.

That night when we hauled in the sturgeon, we still had plenty of room in the fish box, so we continued fishing. The sturgeon lay there, alive, its wet scales reflecting starlight. It seemed an ancient thing from before the dinosaurs, breathing there, too primitive and rugged to die quickly like the more complex and finely tuned salmon. I kept going over to watch it.

In — Spiritus. Out — Sanctus. Those were the words that came to me as I watched its gills pumping the alien air. In comes the spirit, out goes something holy, life perhaps, but I realized then that the "in" and the "out" are somehow the same thing and everything is touched by the holy when in the presence of death.

I watched Zoomer pumping air, hanging on to life with that same primitive doggedness of the sturgeon for all that night and most of the next day before the fog lifted enough to get in a medevac bird. Others died, like the salmon, but Zoomer kept pumping, enduring the shelling with the rest of us, waiting for the fog to clear, waiting for the helicopter that would take him home. It came. As the fog closed in again, just minutes after the helicopter got Zoomer out alive, I realized that the mystery of life and death had once again played out before me and that once again I was in a sacred space and, other than in my role as a walking weapons guidance system for the United States of America, totally unprepared to be there. The Marine Corps taught me how to kill but it didn't teach me how to deal with killing.