Accessibility links
That Used To Be Us NPR coverage of That Used to Be Us: How America Fell Behind in the World It Invented and How We Can Come Back by Thomas L. Friedman and Michael Mandelbaum. News, author interviews, critics' picks and more.

That Used To Be Us

That Used To Be Us

Title
That Used To Be Us
Subtitle
How America Fell Behind in the World It Invented and How We Can Come Back
Author
Thomas L. Friedman and Michael Mandelbaum

Title
That Used To Be Us
Subtitle
How America Fell Behind in the World It Invented and How We Can Come Back
Author
Thomas L. Friedman and Michael Mandelbaum

NPR stories about That Used To Be Us 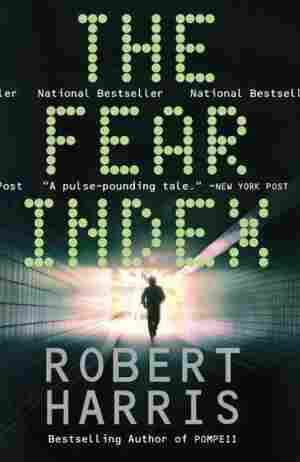 Driven To Win The Market, A Presidency And The End Of Slavery 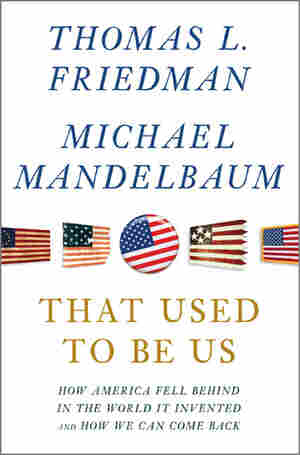 Thomas Friedman On 'How America Fell Behind'

September 6, 2011 • In his new book, the New York Times columnist explores how the U.S. fell from industrial, political and academic glory after the Cold War. "Just when we needed to be lacing up our shoes and running faster, we put our feet up," he says.

Thomas Friedman On 'How America Fell Behind'

Excerpt: That Used To Be Us

If You See Something, Say Something

This is a book about America that begins in China.

In September 2010, Tom attended the ­World Economic ­Forum's summer conference in Tianjin, China. Five years earlier, getting to Tianjin had involved a ­three-​­and-​­a-​­half-​­hour car ride from Beijing to a polluted, crowded Chinese version of Detroit, but things had changed. Now, to get to Tianjin, you head to the Beijing ­South Railway Station—​­an ultramodern flying saucer of a building with glass walls and an oval roof covered with 3,246 solar panels—​­buy a ticket from an electronic kiosk offering choices in Chinese and En­glish, and board a ­world-​­class ­high-​­speed train that goes right to another roomy, modern train station in downtown Tianjin. Said to be the fastest in the world when it began ­operating in 2008, the Chinese bullet train covers 115 kilometers, or 72 miles, in a mere twenty-nine minutes.

The conference itself took place at the Tianjin Meijiang Convention and Exhibition Center — ​­a massive, beautifully appointed structure, the like of which exists in few American cities. As if the convention center wasn't impressive enough, the conference's ­co-​­sponsors in Tianjin gave some facts and figures about it (www.­tj-​­summerdavos.cn). They noted that it contained a total floor area of 230,000 square meters ­(almost 2.5 million square feet) and that "construction of the Meijiang Convention Center started on September 15, 2009, and was completed in May, 2010." Reading that line, Tom started counting on his fingers: Let's see — ​September, October, November, December, January.

Returning home to Maryland from that trip, Tom was describing the Tianjin complex and how quickly it was built to Michael and his wife, Anne. At one point Anne asked: "Excuse me, Tom. Have you been to our subway stop lately?" We all live in Bethesda and often use the Washington Metrorail subway to get to work in downtown Washington, D.C. Tom had just been at the Bethesda station and knew exactly what Anne was talking about: The two short escalators had been under repair for nearly six months. ­While the one being fixed was closed, the other had to be shut off and converted into a ­two-​­way staircase. At rush hour, this was creating a huge mess. Everyone trying to get on or off the platform had to squeeze single file up and down one frozen escalator. It sometimes took ten minutes just to get out of the station. A sign on the closed escalator said that its repairs were part of a massive escalator "modernization" project.

What was taking this "modernization" project so long? We investigated. ­Cathy Asato, a spokeswoman for the Washington Metropolitan Transit Authority, had told the Maryland Community News (October 20, 2010) that "the repairs were scheduled to take about six months and are on schedule. Mechanics need 10 to 12 weeks to fix each escalator."

A simple comparison made a startling point: It took China's Teda Construction ­Group ­thirty-​­two weeks to build a ­world-​­class convention center from the ground up — ​­including giant escalators in every corner — ​­and it was taking the Washington ­Metro crew ­twenty-​­four weeks to repair two tiny escalators of ­twenty-​­one steps each. We searched a little further and found that WTOP, a local news radio station, had interviewed the ­Metro interim general manager, Richard Sarles, on July 20, 2010. Sure, these escalators are old, he said, but "they have not been kept in a state of good repair. We're behind the curve on that, so we have to catch up . . . Just last week, smoke began pouring out of the escalators at the Dupont Circle station during rush hour."

On November 14, 2010, The Washington Post ran a letter to the ­editor from Mark Thompson of Kensington, Maryland, who wrote:

I have noted with interest your reporting on the $225,000 study that ­Metro hired Vertical Transportation Excellence to conduct into the sorry state of the system's escalators and elevators . . . I am sure that the study has merit. But as someone who has ridden ­Metro for more than 30 years, I can think of an easier way to assess the health of the escalators. For decades they ran silently and efficiently. But over the past several years — ​­when the escalators are running — ​­aging or ­ill-​­fitting parts have generated horrific noises that sound to me like a Tyrannosaurus Rex trapped in a tar pit screeching its dying screams.

The quote we found most disturbing, though, came from a Maryland Community News story about the long lines at rush hour caused by the seemingly endless ­Metro repairs: " 'My impression, standing on line there, is people have sort of gotten used to it,' said Benjamin Ross, who lives in Bethesda and commutes every day from the downtown station."

People have sort of gotten used to it. Indeed, that sense of resignation, that sense that, well, this is just how things are in America today, that sense that America's best days are behind it and China's best days are ahead of it, have become the subject of watercooler, ­dinner-​­party, ­grocery-​­line, and classroom conversations all across America today. We hear the doubts from children, who haven't been to China. Tom took part in the September 2010 Council of Educational Facility Planners International (CEFPI) meeting in San Jose, California. As part of the program, there was a "­School of the Future Design Competition," which called for junior high school students to design their own ideal green school. He met with the finalists on the last morning of the convention, and they talked about global trends. At one point, Tom asked them what they thought about China. A young ­blond-​­haired junior high school student, Isabelle Foster, from Old Lyme Middle School in Connecticut, remarked, "It seems like they have more ambition and will than we do." Tom asked her, "­Where did you get that thought?" She couldn't ­really­ explain it, she said. She had never visited China. But it was just how she felt. It's in the air.

We heard the doubts about America from Pennsylvania governor Ed Rendell, in his angry reaction after the National Football League postponed for two days a game scheduled in Philadelphia between the Philadelphia Eagles and the Minnesota Vikings — ​­because of a severe snowstorm. The NFL ordered the games postponed because it didn't want fans driving on icy, ­snow-​­covered roads. But Rendell saw it as an indicator of something more troubling — ​­that Americans had gone soft. "It goes against everything that football is all about," Rendell said in an interview with the sports radio station 97.5 The Fanatic in Philadelphia (December 27, 2010). "We've become a nation of wusses. The Chinese are kicking our butt in everything. If this was in China, do you think the Chinese would have called off the game? People would have been marching down to the stadium, they would have walked, and they would have been doing calculus on the way down."

We read the doubts in letters to the editor, such as this impassioned post by Eric R. on The New York ­Times comments page under a column Tom wrote about ­China (December 1, 2010):

We are nearly complete in our evolution from ­Lewis and ­Clark into ­Elmer Fudd and Yosemite Sam. We used to embrace challenges, endure privation, throttle our fear and strike out into the (unknown) wilderness. In this mode we rallied to span the continent with railroads, construct a national highway system, defeated monstrous dictators, cured polio and landed men on the moon. Now we text and put on makeup as we drive, spend more on video games than books, forswear exercise, demonize hunting, and are rapidly succumbing to obesity and diabetes. So much for the pioneering spirit that made us (once) the greatest nation on earth, one that others looked up to and called "exceptional."

Sometimes the doubts hit us where we least expect them. A few weeks after returning from China, Tom went to the ­White ­House to conduct an interview. He passed through the ­Secret Service checkpoint on Pennsylvania Avenue, and after putting his bags through the ­X-​­ray machine and collecting them, he grabbed the metal door handle to enter the ­White ­House driveway. The handle came off in his hand. "Oh, it does that sometimes," the Secret Service agent at the door said nonchalantly, as Tom tried to fit the wobbly handle back into the socket.

And often now we hear those doubts from visitors here — ​­as when a neighbor in Bethesda mentions that over the years he has hired several young women from Germany to help with his child care, and they always remark on two things: how many squirrels there are in Washington, and how rutted the streets are. They just can't believe that America's capital would have such potholed streets.